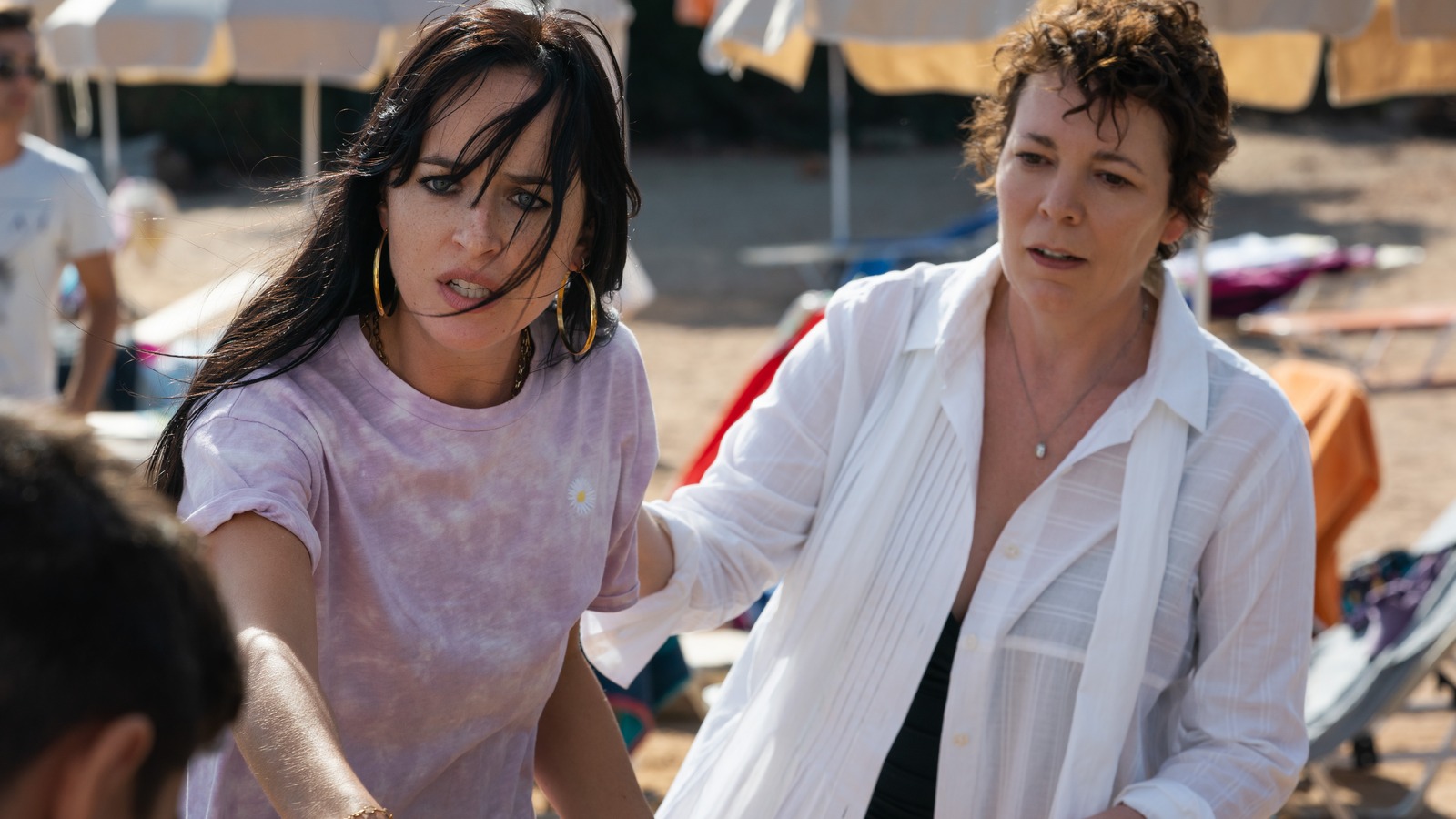 The Lost Daughter is the feature directorial and screenwriting debut of actor Maggie Gyllenhaal. And what a first effort it is. Based in a slim novel by Italian author Elena Ferrante, the film is structured as a psychological drama with overtones of a thriller, but it doesn’t bend to the expectations of those genres, functioning instead as a meditation on memory, motherhood and grief, all filtered through a superb, complex performance–as if we would expect less–from the great Olivia Colman.

Colman plays Leda Caruso, a middle-aged professor of comparative literature who heads to a small seaside resort village in Greece to take some vacation time and work on a book. While there, she becomes intrigued (obsessed, really) with a young mother named Nina (Dakota Johnson), who’s vacationing there with her toddler daughter, her vaguely threatening husband and the rest of her extended, somewhat menacing family.

Watching Nina and her daughter together begins to unlock memories for Leda of her own younger years as a mother and domestic partner. As those recollections eventually focus on a significant, impulsive experience that changed the course of her life and her family’s lives, she also commits a bizarre, strangely inappropriate act in the present that blurs both timelines in her mind and leads her to a point where she could face both mental and physical consequences for her actions.

What makes The Lost Daughter work so well is its three central roles and Gyllenhaal’s complete control of the movie’s tone. While there are a few moments here and there where the film is perhaps too understated for its own good, and the viewer may struggle to make essential connections, the director carries the deliberately ambiguous storyline forward with confidence, largely trusting in her cast and in the viewer’s involvement.

She’s aided immeasurably by first Colman, who delivers a nuanced, multi-layered portrait of a woman who has found a sense of contentment with herself yet is still haunted by the actions of her past–actions for which she is not necessarily regretful. Yet there is just enough conflict between her experiences in the present and her memories to tear slowly at her psyche and emotional well-being. This conflict is only heightened by her interactions with Nina. As the latter, Johnson gives what may be her best performance to date, swerving between her unadulterated love for her daughter and a sense that she has been forced into her circumstances (and her boorish new family) against her will.

And then there is Jessie Buckley (I’m Thinking of Ending Things) as the younger Leda, back when she was struggling both as a mother and a student trying to launch her career and follow her life’s passion. Buckley is simply sensational, and her interactions with her little daughters are equally painful, heartfelt and bitterly realistic. There is a tendency to (rightfully) venerate mothers and motherhood, elevating both to some unattainable combination of sainthood and holy work, but in these sections of the film Gyllenhaal and Buckley present the unvarnished truth of how unimaginably difficult the job can be and how it can feel like a trap as much as a blessing.

It is those complicated views of motherhood that are at the heart of The Lost Daughter, although Gyllenhaal’s script and direction never quite reveal all the motivations at play. Instead we are left to figure them out on our own, which may alienate some viewers but provides a refreshing lack of judgment upon the actions of both the younger and older versions of Leda.

Gyllenhaal and cinematographer Hélène Louvart provide a great visual dynamic for the film, contrasting the wide-open, sun-soaked expanses of the resort with the closed-in, suffocating interiors of the young Leda’s small apartment. This perhaps mirrors the inside of Leda’s mind as well: the dark recesses of her memories set against the freedom and light in front of her. Whether she can ever resolve the two is the mystery that The Lost Daughter refuses to provide an easy answer for, making this an unsettling, poignant and terrific filmmaking debut.