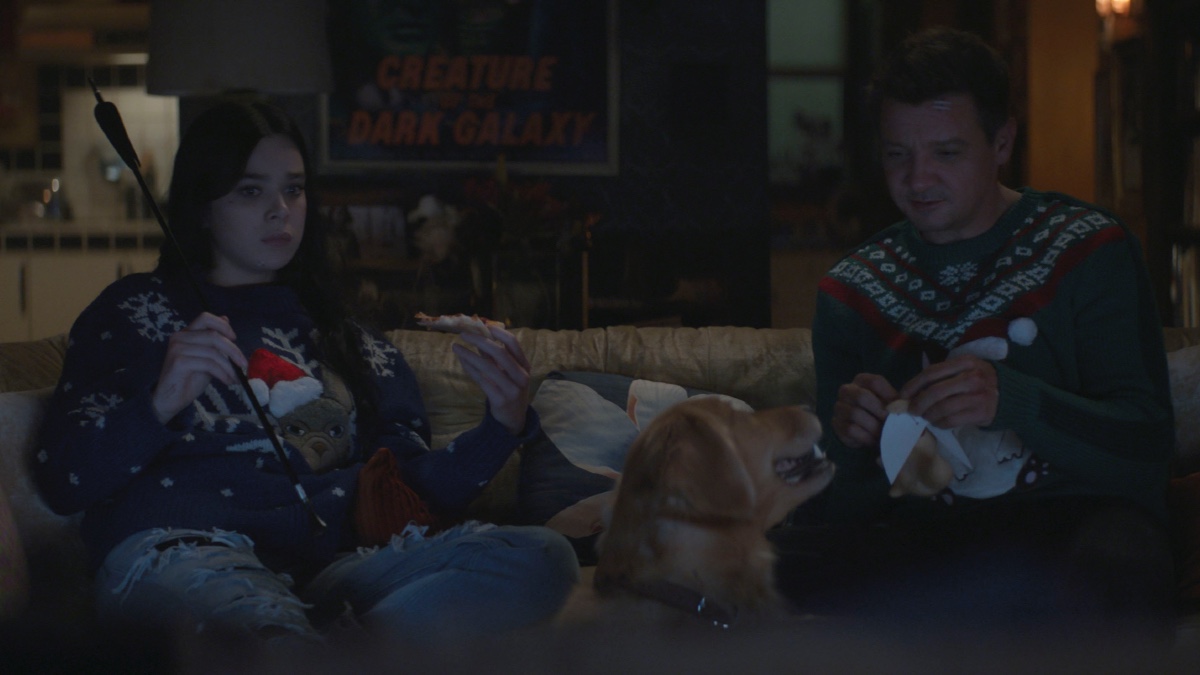 This article contains spoilers for Hawkeye through episode 4.

In superhero storytelling there’s usually only one path for any given franchise to take. And that’s to go bigger.

Marvel Studios has understood that better than anyone and has revolutionized the depiction of superheroes onscreen by making sure its universe grows and grows and grows. The philosophy of “BIG” is baked into the MCU’s very core. From the moment that Iron Man premiered in 2008, Marvel’s goal was to create an interconnected world of IP-controlled heroes, culminating in the first true team up film with 2012’s The Avengers. Since then The Avengers have re-teamed three other times, lost half the universe’s population, got it back, and earned billions upon billions of dollars for the The Walt Disney Company in the process.

As Marvel continues into its Phase Four of storytelling, the sheer size of the venture sems constantly at risk of collapsing under its own weight. More than anything, this franchise needed to de-escalate and catch its breath before the next big existential threat arrived to the MCU’s war-torn universe. Thankfully it now has exactly that in the form of Disney+ series Hawkeye.

Hawkeye is an entirely pleasant TV-watching experience for many reasons. Jeremy Renner appears to be having fun for the first time in a long time as battle-hardened assassin-turned-Avenger Clint Barton. Hailee Steinfeld is a breath of fresh air as young archer Kate Bishop. And the entire thing is saturated with copious amounts of Christmas cheer. The six-episode series, four of which have now aired, is just fundamentally good superhero storytelling. The real key to Hawkeye’s success in the context of the larger MCU, however, is that it perfectly understands what is asked of it. This is a low-stakes side quest within the MCU before the real danger gets rolling again. That’s not only acceptable – it’s essential to Marvel’s ability to continue on for years to come without burning out.

Granted, Hawkeye never loses sight of the fact that it’s part of the larger world. The series actually opens with a flashback to one of Marvel’s biggest action setpieces with the Battle of New York in 2012. Then, throughout the show’s present day narrative, the trauma of what Thanos did to the universe is ever present. Clint sees “Thanos was right” as graffiti scrawled onto a urinal when sneaking out of a showing of Rogers: The Musical. Later, in episode 4, Clint and Kate borrow a “Thanos Was Right” branded mug from Kate’s aunt’s kitchen.

The effects of Thanos’s snap and the ensuing “Blip” still loom large on Hawkeye and the world isn’t fully ready to move on from then. The Marvel Cinematic Universe is, however. And it does so beautifully in this show. While Marvel’s three most recent cinematic efforts, Black Widow, Shang-Chi and The Legend of The Ten Rings, and Eternals, deal with truly apocalyptic threats, all Hawkeye is concerned with is cleaning up some loose ends.

Clint Barton’s only goal in this series is to finally close the book on Ronin and then get back home for Christmas. Kate Bishop’s only goal is to figure out what’s up with her mother’s (almost literal) mustache-twirling boyfriend. Hawkeye is laser focused on those two low stakes goals and is all the better for it. There is very little sense that any actual death, danger, or dismemberment can befall these two lead characters. Clint’s supernaturally patient wife Laura (Linda Cardellini) periodically checks in on his progress but is never concerned that he’s in over his head. The biggest tension in the series is the clock ticking down to Christmas. The show has even gone out of its way to have diegetic sources proclaim how many days left until the holiday, with a radio program loudly announcing we’re three days out in episode 4.

Also in episode 4 is a moment in which Kate’s mom Eleanor Bishop (Vera Farmiga) asks whether Kate is helping Hawkeye with “an Avengers-level threat.” Clint responds with a “well, not exactly,” laying Eleanor’s concerns to rest. Of course, Clint Barton would not let a teenager tag along on an actually dangerous mission. Fighting Thanos is a grown up job, but the Tracksuit Mafia? Sure! Come along, young archer, this should be a good training exercise.

Despite having decidedly lower stakes than your typical Marvel fare, Hawkeye doesn’t feel any less essential. That’s the secret to good drama. When contextualized and executed with care, getting home in time for Christmas can feel as urgent and difficult as going back in time to retrieve all the Infinity Stones. Hawkeye’s lower stakes also frees up some space for the show to really invest in its two lead characters. If a Young Avengers team up is in the MCU’s future (and it almost certainly is), this time spent characterizing Kate Bishop is truly invaluable.

Of course, Marvel has previously teased smaller, more intimate projects before suddenly introducing a world-threatening MacGuffin in the end. Who would have guessed, for instance, that a simple Black Widow prequel would come close to installing Ray Winstone as a global dictator in its third act? Hawkeye has two episodes to go and some major reveals still on the docket. Vincent D’Onofrio’s Wilson Fisk a.k.a. Kingpin is still almost certain to appear and threatens to significantly raise the stakes on what began as a simple holiday action tale.

Based on the conclusion of episode 4, however, at least Clint still has his head on straight and understands what an appropriate level of risk for his young ward is. When Yelena Belova arrives to assassinate Clint for letting her sister die, Clint misunderstands her presence as someone having hired a Widow assassin to stop his Ronin mission. He then immediately shuts Kate Bishop’s involvement in all of this down.

“Someone has hired a Black Widow assassin. This has gotten very real, very quickly. So I’m doing this alone,” he tells her before commanding her to go home.

Kate Bishop won’t go home, of course. It’s not in her nature to turn down a fight. But for once at least, the adults in the MCU are behaving like adults. Clint Barton understands the assignment. Now let’s get his ass home for Christmas.