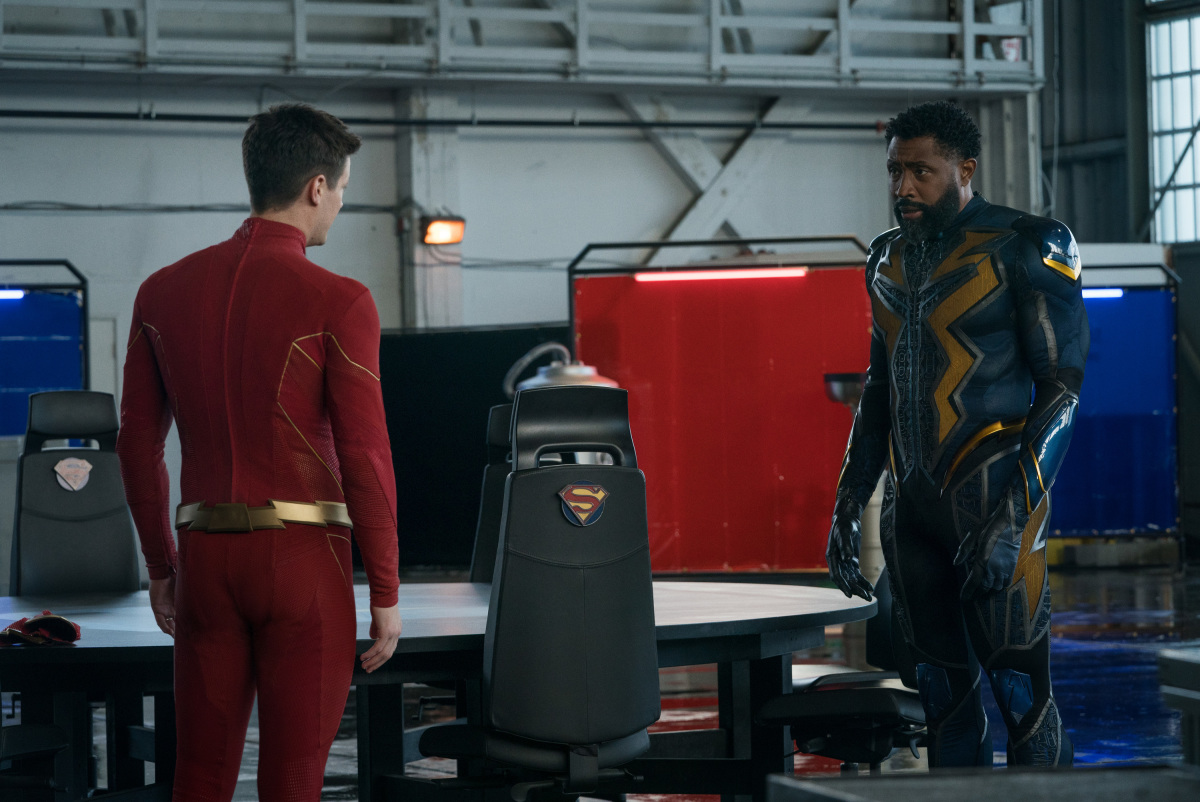 As crossovers go, The Flash’s five-part Armageddon event is pretty low-key, so much so that it’s easy to see why showrunner Eric Wallace doesn’t really like the idea of calling it a crossover at all. And maybe that’s a good thing, in the end, because rather than going for the spectacle of, say, a Crisis on Infinite Earths or Crisis on Earth-X, the show has time to give us quieter, richer character moments of the sort we so rarely get between heroes from different shows.

“Armageddon, Pt. 3” brings Black Lightning’s Jefferson Pierce back to the Arrowverse, not to really fight any bad guys but to simply help his friend. Apparently, during one of the seemingly many times that the CW brand Justice League got together in their drafty aircraft hanger pseudo-hall to hang out offscreen, they came up with a series of protocols – code-named “Injustice” as a nod to the comics nerds among us – meant to deal with the situation if any one of their team goes rogue and needs to be stopped. It turns out that Jefferson is Barry’s designated partner in this buddy system, meant to help him get rid of his powers if the situation calls for it.

When the original cast list for the Armageddon event was released, I’ll admit to feeling a bit skeptical about the assortment of heroes chosen for this event, but it must be said that Jefferson is precisely the perfect man for this moment. The only other character I can think of who can match his unflappable calm and preternatural skill at pep talks is possibly human ray of sunshine Ray Palmer, but since we just saw him a couple of episodes ago, it seems unlikely he’d be back. (And is, technically not part of the JV Justice League anyway.)

Jefferson’s rational approach makes for a refreshing contrast with Barry’s increasingly manic attitude – heck it’s a calm center in the story of the rest of this episode. (I do truly like Danielle Nicolet, but asking her to have three separate emotional breakdowns over the course of this hour was just too much.) Obviously, the two have to spend a few minutes hurling lightning at each other when Barry tries to force Jefferson into removing his powers, because this is a comic book show and the visuals of Black Lightning versus The Flash, even for a few moments, are too good to pass up.

But Jefferson’s calm surety – about Barry’s innate goodness, about the ways Oliver believed in him, about the fact that Barry is and always has been the best of all of this ragtag crew of heroes – is not just necessary, it feels like an adult has somehow stepped back into the room again after three episodes of slowly increasing chaos. (I also may have gotten a little teary about the return of Jefferson’s “Where’s the future?” mantra. I am not made of stone.)

Though Black Lightning ended back in May and Supergirl hung up her cape just a few short weeks ago, by including Jefferson and Alex the Armageddon event – as well as Arrow’s Mia Queen, who is clearly showing up in the future next week and who hasn’t been seen onscreen since early 2020 – it not only makes the Arrowverse feel more connected, it lets us, as viewers, feel like this universe is something full and complete, that keeps ticking on even when we’re not watching it. Just because the final credits may have rolled on one hero’s show, that’s not the end of their story. And there’s something to desperately hopeful in that, in a way that really works for this universe. It’s something I hope the rest of the DC TV universe manages to embrace in the future. We don’t need five-night megaevents all the time. This? This is the kind of thing this world needs more of.

Happily, “Armageddon, Pt. 3” also confirms fairly quickly what we all pretty much guessed last week, that something wonky is going on with The Flash’s timeline, Joe’s not meant to be dead, and Barry’s impending madness seems to be being caused and/or manipulated by someone or something else. Also, while Despero may not be the person rewriting reality, he’s certainly not exactly helping things much, and it’s probably time that everyone on Team Flash stopped believing that he is anything other than a slightly less maniacal enemy.

To be fair, I feel like there had to be some way to do that without involving Still Force avatar/god/whatever Dion is and making us relive any aspect of one of the worst storylines in the show’s history. Sure, he seems to mean well and props for keeping Iris from dying of time sickness or whatever that is, but nothing about Dillon’s existence or powers – why can the Still Force give Barry speed? – makes any sort of sense and it’s exhausting so perhaps it’s for the best if we just don’t think about it too hard.

“Armageddon, Pt. 3” saves its best moment for last, however, as Barry runs to 2031 to try and figure out who really caused the cataclysmic event he’s supposed to bring about, only to discover that Iris is apparently somehow ready to marry Eobard Thawne. And a bunch of the superfriends, including Ryan Wilder, Ryan Choi, and Alex Danvers, are apparently fine with it? They’re even angry at Barry for showing up!  This is all so incredibly ridiculous that it full rounds the bend straight into awesome, and though I have no idea how Thawne is a.) alive, b.) in 2031, or c.) marrying Iris, I also know that I cannot wait to find out. This cliffhanger is the first of this event series that actually feels propulsive and unexpected even though we probably all predicted that whatever was actually going on, Thawne probably had something to do with it. It’s What else is this event going to surprise us with?