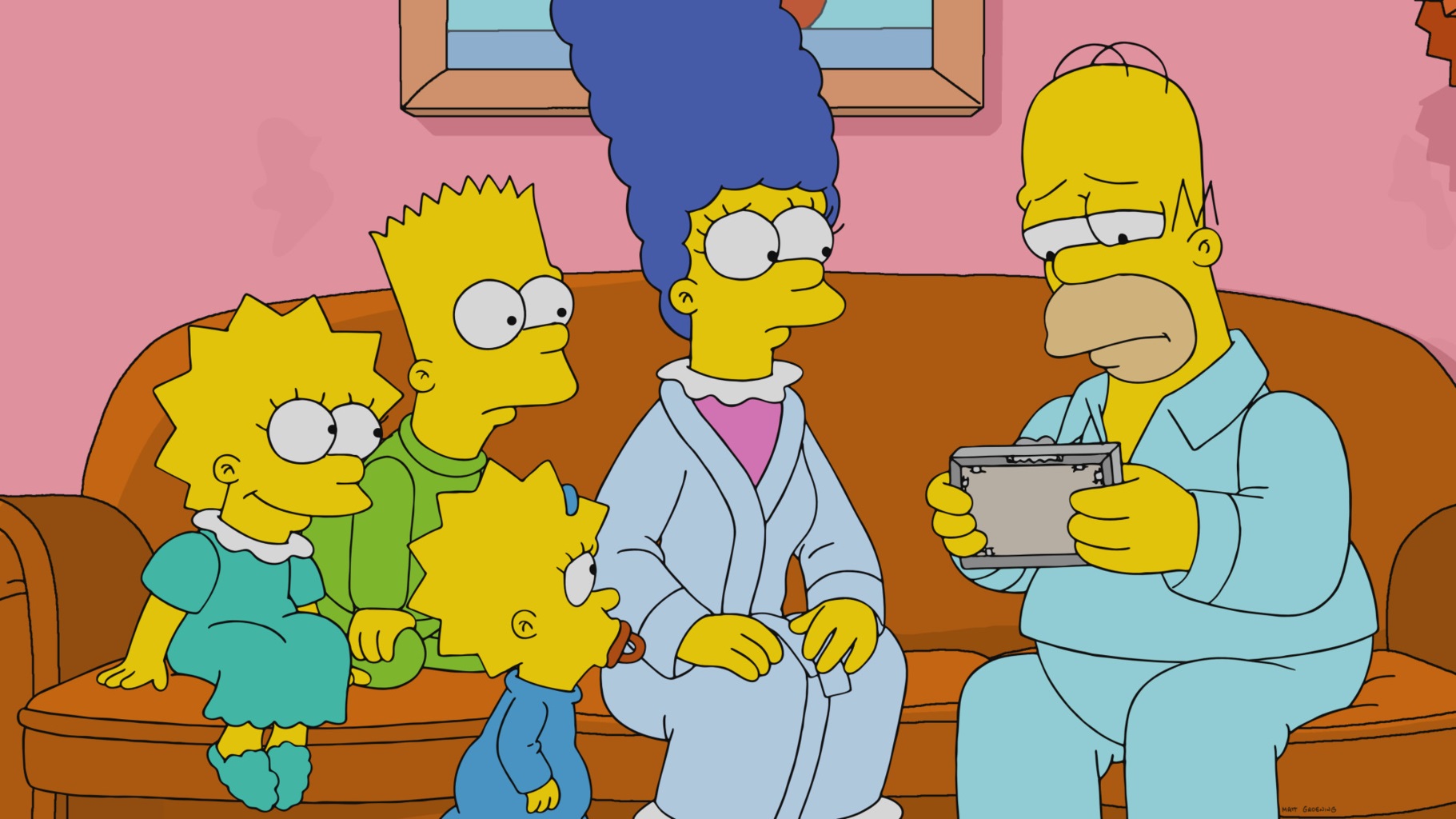 “Mothers and Other Strangers” is the series’ Mother’s Day installment, filling in for the Thanksgiving holiday, and it is a feast of emotional stuffing. Glenn Close returns as Mona Simpson, the radical hippie demonstrator who left Homer when he was 9 to go on the run from the FBI, which in this episode, tries to masquerade as Festive Balloons Inc. But nothing can cover up the broken heart, or the broken timelines, of the Simpson saga.

After a shaky start, The Simpsons has been on a roll this season. While “Mothers and Other Strangers” doesn’t quite capture the exhilaration of the spectacular two-parter, “A Serious Flanders,” nor break the ground of “Portrait of a Lackey on Fire,” it mines psychological depth from the Simpson family. Over the course of facing Homer’s separation anxiety, and Therapist #3’s (Rachel Bloom) per-minute fees, the family bonds, and even give Marge the kind of Mother’s Day she doesn’t know she needs. There’s an app for that.

The best comic aspect of the episode is the balance between empathetic understanding and cynical dismissal. Homer’s line about how the image of his mother is all he’s got left of her, and how it’s getting fuzzier, along with his tears, and the desperate need not to upset Marge, combine into what could be a powder keg. But every step into therapy is a blaze waiting to be triggered. Marge doesn’t know if the family can afford more mental health, which carries double meaning, and the therapeutic solution they pick on the App Store is called NUTZ.

As if they know this itself could bring calls in from mental health advocates who are trying to downplay this particular association, they offer CBD oil in the shape of every version of God. Though unexplored, this could prove to be so much better than what Homer can cop from Reverend Lovejoy. When Homer pours out his problems to the self-righteous minister, he gets “have you considered any other religions in return.” This is the same advice Lovejoy gave to Ned Flanders seasons ago, and truly encapsulates the inflexible, unimaginative man which brings the character his unique flavor of humor. Along with the guidance counselor, who’s always looking for angry, messed-up, young men, he shows there are no good alternatives.

The Simpsons truly captures the feel of convenience store psychotherapy, from the moment Homer has to prove he’s a human being to download the mind-hack. “Are you a robot?” the machine asks. “I wish,” Homer pines, and contemporary wellness is defined. The on-call therapists have been on a roll since the Patriots traded Tom Brady, and set motivational goals like getting a minute in the “Cash Tornado” for anyone who makes a client cry. Closure is out of the question. It’s a broad stroke, but works incisively.

While Homer is the center, basically stealing Mother’s Day from the mom in the house, Marge has her own problems, like finding space for Lisa’s annual school-made Mother’s Day mug. She’s already got three drawers full, and with Bart’s drawer of questionable constructions. This hints towards the psychological premise of the episode, but Marge’s obsessiveness has already been covered therapeutically.

Over the past decade, The Simpsons has cleaned up much of its animation. We lose the sloppy edges which give it the dangerous feel of recklessness. That we get in Abe tonight. Whether his highlighted alcoholism is a new revelation or just exposed by the new animators is open to interpretation, but he is the grit of the film stock. His biggest dream is making money selling grits to rural suckers.

Abe is awful. He tells Homer his mother is dead, rather than the truth, which is:  She wrote a note on the liquor cabinet, where he would see it, saying she was wanted by the FBI, and leaving forever. By the time he got to the words strong Absolut Vodka, he was back on the sauce, and way over his head. His line about not giving Mona a funeral because there was too much going on, with his wife dying, is a classic Simpsons logic-turnaround, and Homer’s just the son to buy it.

The entire episode is loaded with prime set-ups and unexpected punchlines, but a tour de force of contradictory emotions. Homer is so angry at his mother for leaving him that seeing her again will be the best day of his life. He hopes she loves him as much as the day she left him, fully realizing what a low bar that is. Homer’s doubt about whether a significant event happened is confirmed by his father’s eye-witness affirmation. If his ever-forgetful father saw it too, Homer must have imagined it. Also, Abe says the one thing he could never give his wife is what she wanted, which was to leave him. Realizing this is all it takes to cure his alcoholism, just like it does always on TV.

“Mothers and Other Strangers ” is packed with humorous asides, backhanded insults, and tasteful puppy chow. The episode opens on the subplot, Muttflex, the premium cable channel made for dogs. Santa’s Little Helper is watching a canine-friendly version of Sex and the City. This becomes both a running gag, and a commentary on contemporary television. As far as Homer and Bart are concerned, doggy-POV-TV rules. By the time the Game of Thrones takeoff episode about who will control the iron bone comes on, it becomes must-see TV, and gives Fox News a reason to exist. They also include Cat Stevens’ early hit “I Love My Dog,” completely in keeping with the rhythm of Simpsons traditionalism. They have a great knack for finding the right song, and by the end it feels like a good idea to have dinner on the floor.

Homer is 16 when he finds out the truth about his mother, the day he learned how to drive not very well. It is also the first day Wiggum starts his beat as a young, slim, patrolman. While this negates other flashbacks it does present a momentous occasion. The day Wiggum discovers donuts. It is not quite believable he’s never encountered them, but from the pop of his first button, and the knowledge that they come by the dozen, we know he’s going to be the perfect cop for Springfield.

Homer shares many attributes with Wiggum, as well other Springfield residents, after a while they all do start to look the same. But Homer stands out because the closest thing he’s had to a mother for the past 2,600 days has been a maple syrup lady. The Simpsons are obsessed with sweets, so Abe’s turnaround leads to a mending of his relationship with Homer, even learning his son is right-handed and prefers TV over books, just like him. The connections are shallow, inconsequential, and downright subversive to the point which it ultimately makes in spite of itself.

The installment includes a steady stream of sight gags, and the backgrounds are loaded with funny signs or visuals which pass quickly but give the impression of great care. It is ridiculous when Homer has to start over, counting stars, when Abe points out he missed one, which is why it stands out among the groaners. Also, the truck-stop waitress whose double wide has been double empty is topnotch double entendre, and Abe’s shortcut from flirtation to ditching her is also cut directly from The Simpsons’ personal blend of understated drollery.

Overall, the episode captures the right balance between grounded character buffoonery and goofy absurdity. It is silly when Mona recognizes Homer because of how he bangs his head, but endearing. We feel for Homer when he finds the mangled sound of his mother’s voice coming out of the drive-through PA to be beautiful. Equally silly and touching is how the Simpson family all get together at the conclusion while their venue declares pending bankruptcy after Homer takes brunch. The comment about enjoying San Francisco until it gentrifies is just sad, but the wide range of pacifying drugs peddled by the NUTZ App, especially for disobedient kids, like SleepItOff, KnockMeOut, QuieTimeSoon, NoFightNightNight, and my favorite flavor, AppleLullabyby, is exceptional farce, targeted well.

“Mothers and Other Strangers” plays a bit with the known story of Homer and his mother Mona, and the conclusion is a little forced because of it. The possible dream ending isn’t as satisfying as it wants to feel, but does provide a great punchline. Every threat of an overbearingly heart-tugging moment is adeptly swept into comic territory with the ease of a moon from a newborn child. Closure is no longer considered a valid psychological concept, so we can be sure to revisit this scenario again. Homer’s psyche is equally wonderful as a playground and a minefield.

Link Tank: Avengers: Infinity War vs. Avengers: Endgame – Vote for the Best MCU Movie
Elden Ring Producer Reveals How Long It Takes to Beat the Game
Bad Buddy and the Subversive Sentimentality of BL Storytelling
Doom Patrol Season 1 Episode 2 Review & After Show
The Gilded Age Isn’t a Downton Abbey Prequel (But May As Well Be)