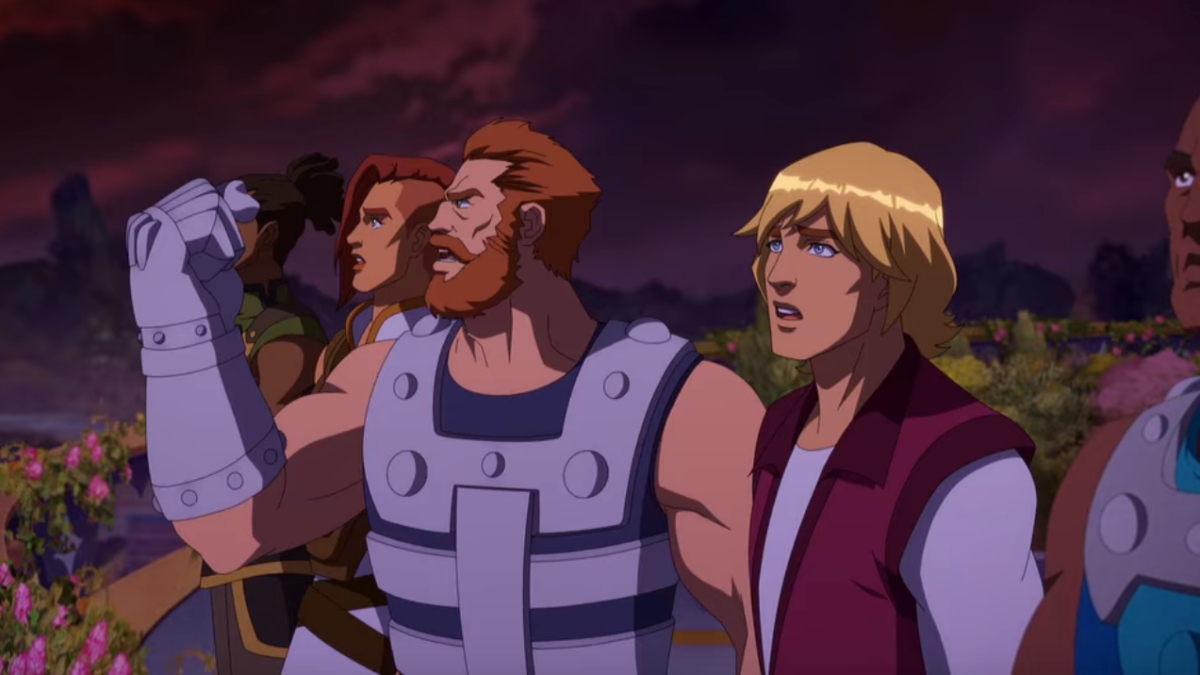 This Masters of the Universe: Revelation article contains spoilers for the first episode of Part 2.

All hope seems lost for the good guys in the first episode of Masters of the Universe: Revelation Part 2. Adam and Teela have returned home but Skeletor isn’t far behind. The sky turns a horrific purple and he appears out of it, empowered by He-Man’s stolen sword. The heroes that were left at the palace realize their time without their most evil foe is at an end. The heroic Eternian known as Fisto steps forth, raises his fist toward Skeletor and says, dead serious, “I’d sure like to fist him.”

It’s a moment that takes you completely off guard, even in a show that’s meant for adults. Everything leading to it as serious and dramatic as the rest of Masters of the Universe: Revelation. The line isn’t meant as a record scratch kinda joke, it’s played as if this is a completely normal and intimidating thing for Fisto to say. Nobody gives him a look like, “really, dude?”

Kevin Smith is extremely proud of this line, all the more so because it wasn’t in the script.

“I knew it wouldn’t make it past the script stage,” Smith says. “Someone would be like, take it out.”

However, when recording long-time podcast collaborator Ralph Garman as Fisto, Smith couldn’t help but ask him to say the line even if he assumed it wouldn’t make it into the final cut.

“And it made it all the way through!” Smith joyously says. “The flip of the double entendre was just so sweet. It’s something we borrowed from the internet. For years the internet has been taking Fisto and kind of having a good time with him.”

As much as the joke is a cheeky reference to Fisto jokes, Smith also thought the line would add a little levity to a scene that was focused on the world possibly ending. It also spoke to what Smith was trying to do with the series as a whole, making the world of Masters of the Universe feel real despite how silly it can seem on the surface.

“Being able to make the stakes real and make the conservations real, while still playing in a world where you’ve got a talking green cat. That allows you to be able to play and get away with fist jokes,” says Smith.

He-Man/Adam voice actor Chris Wood agrees, saying that Masters of the Universe: Revelation is like a “contemporary drama with an element of fun to it. It’s so true to the original while also dropping the floor out from it. (You get) storytelling that’s mythical and supernatural and otherworldly. Then you also get this guy who says outrageously silly things.”