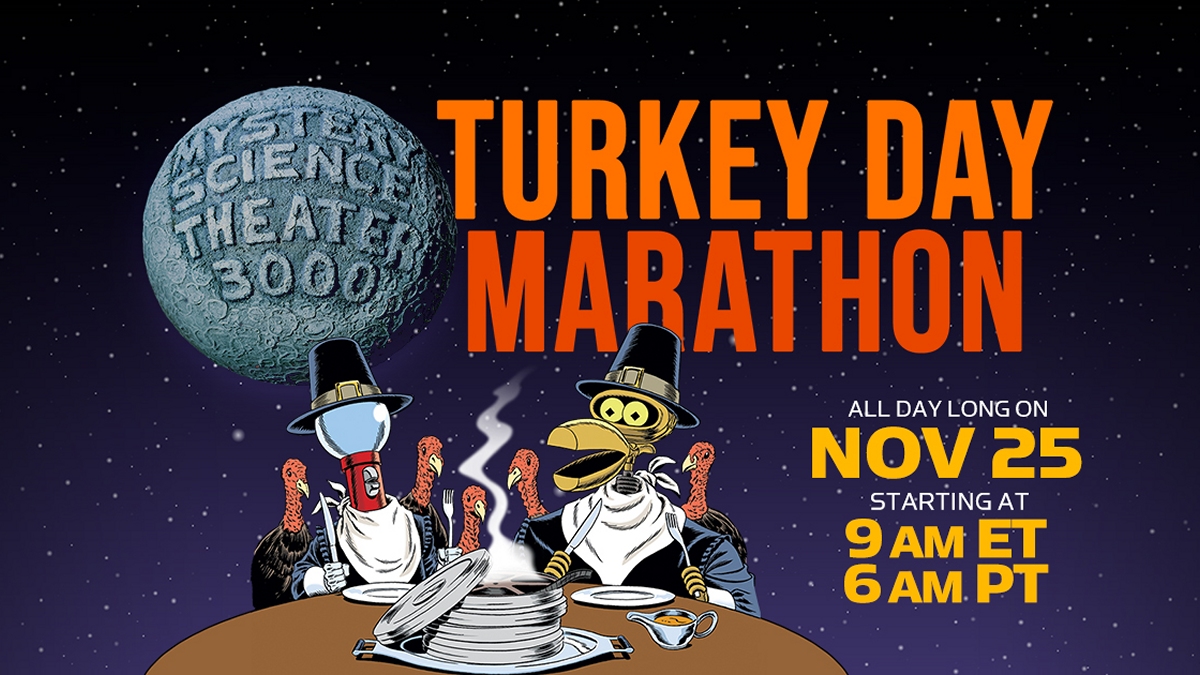 When it comes to Thanksgiving, we all have our non-eating traditions. Many like to watch the Macy’s Thanksgiving Day Parade or check out a game or two of football. For many a geek, Thanksgiving is a day that lets us sit back and watch a whole lot of Mystery Science Theater 3000. It’s part of the show’s DNA. The first episode debuted back on Thanksgiving in 1988. Then the idea of a Thanksgiving marathon became a regular part of Comedy Central’s calendar. Years later, MST3K episodes would be spread through Thanksgiving whether or not there was any news on new seasons being in the works.

Luckily, this is one of those years where there’s a new season in the works! As we await MST3K Season 13, we’ll get another MST3K Turkey Day on our plate to enjoy. On November 25, starting at 9am ET, we’re getting eight classic episodes. Four of them have been voted on by fans, but four more will be selected by MST3K staff members.

What Mystery Science Theater Episodes Will Be in the MST3K Turkey Day Marathon 2021?

In terms of the former four, here’s what we have to look forward to…

Experiment 410: Hercules Against the Moon Men

No fooling, this one’s not an easy one to sit through. While MST3K has tackled many Hercules movies, this is the most infamous. Dr. Forrester and TV’s Frank are very upfront about how tedious the final act is with the heroes wandering through a never-ending sandstorm. Do you know how hard it is to riff a lengthy sandstorm sequence? “Deep hurting,” indeed. Even the Mads feel almost guilty by the time it’s all over.

Experiment 505: The Magic Voyage of Sinbad

This Joel episode is one of the wonderful Russo-Finnish movies that are actually sort of fun on their own, but they’re just so damn weird that they deserve the thrashing the bots give them. As Sinbad journeys to fix the sorrows of his people or whatever, he gets involved in a bear fight, a creepy, laughing horse, and an underwater kingdom filled with puppets. Just a strange, strange adventure that’ll go well with the tryptophan going through your system.

Experiment 513: The Brain That Wouldn’t Die

It’s our very first installment with Mike in the theater as he watches an interesting, albeit disturbing black-and-white horror film about a mad scientist who can’t let go. When the doctor’s girlfriend is decapitated in a car accident, he keeps the head alive and goes around trying to seduce women in hopes of killing one and Frankensteining his lady a full body. There’s also a literal monster in there for some reason. It does have a fun running gag where certain close-ups make characters look like they exist in some kind of void dimension.

Earth is invaded by an army of aliens led by what appears to be a cross between Wario and a chicken. Luckily, Earth is protected by Prince of Space, a Japanese superhero with the power of being invincible against all projectiles. Considering the evil Phantom of Krankor’s main strategy is to shoot lasers at Prince of Space, you’d think that this story would be over before it begins. You’d think. Nope, it’s just a repetitive set of fights that at least escalates into Prince of Space fighting the dumpiest kaiju you’ve ever seen.

And remember, those are just the four we know about! There will be four other surprises chosen during the marathon!

MST3K Season 13 Details Will be Revealed!

Now, I love reruns as much as the next guy, but there’s more to Turkey Day 2021 than just old episodes. With the thirteenth season being worked on right now, they’re going to reveal the movies we’ll be seeing for all thirteen episodes! Sweet!

Season 13 will be part of Gizmoplex, a streaming service of sorts that will allow people to watch old episodes, new episodes, and presumably some special events. While the last two seasons have starred Jonah Ray as Jonah Heston, as well as Hampton Yount as Crow and Baron Vaughn as Tom Servo, this cast will only be covering some of the episodes. Other episodes will be starring the live tour cast, which includes Emily Marsh as Emily Connor, Nate Begle as Crow, and Conor McGiffen as Tom Servo.

So far we know that the Kickstarter-backed season will include Gamera vs. Jiger (1970), Robot Wars (1993), Demon Squad (2019), and presumably Beyond Atlantis (1973). Unlike the Netflix seasons, the episodes will be released as they’re finished instead of dropping all of them at once for the sake of binging.

How and Where to Watch MST3K Turkey Day 2021

Hopefully we find out more about MST3K’s big return this Thanksgiving. While it’s easier to watch it on Twitch or YouTube, there are over a dozen options to watch Turkey Day 2021 listed at Shout Factory’s website.