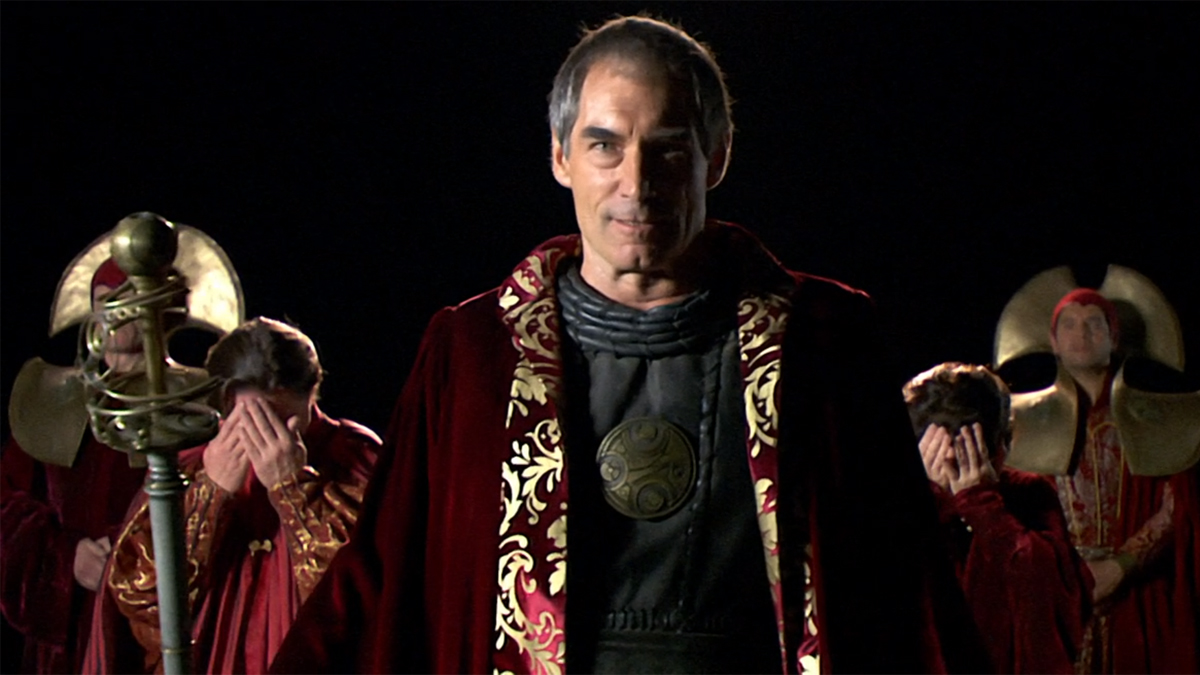 Warning: contains spoilers for Doctor Who: Flux Chapter 4 ‘Village of the Angels’

The Weeping Angels are back, and they are not playing. To be honest, even attempting another Weeping Angels episode is a pretty brave feat in itself. Moffat’s trilogy of stories pretty covered all the bases. ‘Blink’ established the rules for Angels. ‘The Time of the Angels/Flesh and Stone’ gave them the Aliens treatment (more of them, and now they’re fighting people with guns). ‘The Angels Take Manhattan’ showed us what happened when the Angels won, with a New York hotel turned into a Weeping Angels battery farm.

After that story, Moffat declared he was resting the Weeping Angels, and he stuck to that. Barring a couple of cameos, we didn’t see the Angels again in his tenure. ‘Village of the Angels’ has to work hard to justify itself. It does this partly by putting the Angels in a folk-horror-ish English village setting for which they are a terrifyingly natural fit. But it also starts asking questions about the Angels that Moffat worked very hard to skip over.

The Law of the Angels

Before we go into what the Angels are, let’s look at how they work, a subject which ‘Village’ looked at far more closely than Moffat, because frankly, Moffat was never above skipping quickly past something that might not bear up to close examination.

The basic rule is the one everyone knows: when you look at a Weeping Angel, it turns to stone, it cannot move, it also cannot be harmed. When you aren’t looking at it, it moves incredibly fast. If it gets you, it sends you backwards in time – usually back far enough in time that you will die of natural causes before you encounter yourself (although ‘Village’ breaks this rule with Peggy). ‘Village of the Angels’ also establishes that you will die if an Angel feeds on you twice, which is bad news for Rory Williams. Twice, actually. Sometimes, however, the Angel will just break your neck.

Next, as established in 2010’s ‘The Time of Angels,’ “that which holds the image of an Angel becomes itself an Angel.” If you view an Angel on CCTV or videotape recording, it’s still being perceived. Images become how Angels reproduce, or teleport. The rules on Angel individuation are a bit murky. Either way, it’s a fact that becomes terrifying to any Doctor Who fan with a postcard of the Statue of Liberty stuck to the door of their fridge.

A natural extension of that rule gets to the next rule: you stare at an Angel too long, you create an image of it in your mind. You create an Angel in your mind. Any photo, any drawing, and one assumes, any memory of an Angel also becomes one. The Weeping Angels become the ultimate, high stakes, sudden death version of The Game (apologies to all readers who just lost The Game).

But also, when an Angel has infected your mind, you get other side effects – stone dust falling out of your eyes, a cast iron belief that your hands have turned to stone. In ‘Village of the Angels’, you can also sprout Angel wings. And finally, we see the Weeping Angels can actually turn you into an Angel, when the fancy takes them.

That piece of information is accompanied by the new knowledge that some of the Angels, at least, are working for the Division, an organisation that until now we thought existed just because Chris Chibnall thought “Celestial Intervention Agency” (or CIA) sounded silly. Maybe they still are, but it is already clear it is made up of far more than Time Lords. So, this leads to our other big question.

Where Do Weeping Angels Come From?

In a lot of ways, this is a boring question. Not every Doctor Who villain needs to have a “Genesis of the”. The Doctor Who universe is big and strange and the whole point of travelling in the TARDIS is that sometimes you will encounter things that simply don’t have an explanation. But there are breadcrumbs.

We know the Weeping Angels work for the Division. We also know the Division was active during “the Dark Times”, a primordial era of the universe when Space was at war with Time (and Space’s victory may be what lead to Gallifreyans becoming Lords of, well, you can guess). This is when there were Racnoss and Great Vampires and all sorts of dark and terrible things.

It’s also, in deep-cut-mostly-beyond-the-TV-show lore, the period when Rassilon is supposed to have cleaned everything up, established the Time Lords as Time Lords, and got everyone into really big collars. Indeed, there is a clue in David Tennant and Russell T. Davies’ swan song, ‘The End of Time’. When Timothy Dalton’s Rassilon calls a vote to end the universe, all but two of the Time Lords vote in favour. One an anonymous Time Lord we never hear about, the other a mysterious Time Lord who seems to have a connection to the Doctor, whom Russell T. Davies is on record as saying is the Doctor’s mum (although recent canonical revelations raise questions about that theory).

Rassilon declares that these two dissenting votes will “stand as monument to their shame, like the Weeping Angels of old”. This hints that a) The Time Lords recall the Weeping Angels as something from ancient history, and b) Have a history with them which is somehow linked to the concept of shame.

And now we see the Doctor, hunted down and turned into a Weeping Angel herself. Why? Because it makes a cool cliffhanger. It’ll probably be no more significant than the Pandorica, something to take her out of the plot long enough for a Doctor Lite episode.

The Weeping Angels and the Time Lords

The Weeping Angels are also known as The Lonely Assassins. They are invincible, they are super-fast, they are deadly. But they are also (outside of specific circumstances) unable to communicate, easily imprisoned, and unable to really work together without a lot of using that trademark “Weeping” stance to avoid catching a glimpse of their mate and accidentally basilisking themselves.

Could the Weeping Angels be Prisoners with Jobs? Criminals and renegades the Time Lord “Division” sentenced to a life of servitude? It certainly puts some elements in a different light. When the Eleventh Doctor was guarding the crack in time that led to Gallifrey, you don’t need to guess why Daleks, Cybermen, Sontarans, or the Church of Silence wanted to defeat him. But it seems odd that the Angels, as straight-up predators, would want to be a player in that fight. However, if the return of Gallifrey means the return of their jailers, suddenly you can see why they might want to stop that. Is Flux going to reveal that the Time Lords are behind the Genesis of the Weeping Angels?

Honestly, I hope not. In fact, I would just as rather never find out for certain where the Weeping Angels come from. Doctor Who has a vast and complex internal history, and it is very tempting to join those dots. But some dots are better left to the fans to join up.

Doctor Who: Flux continues on Sunday the 28th of November on BBC One, BBC iPlayer and BBC America.

How The Batman Theme Recalls Michael Giacchino’s Video Game Soundtracks
The Gilded Age Isn’t a Downton Abbey Prequel (But May As Well Be)
The Best Serial Killer Shows to Watch After Dexter: New Blood
The Last of Us HBO Series Set Photos Hint at Left Behind Flashback Scene
The Magicians Season 3 Episode 7 Review & Reaction | AfterBuzz TV