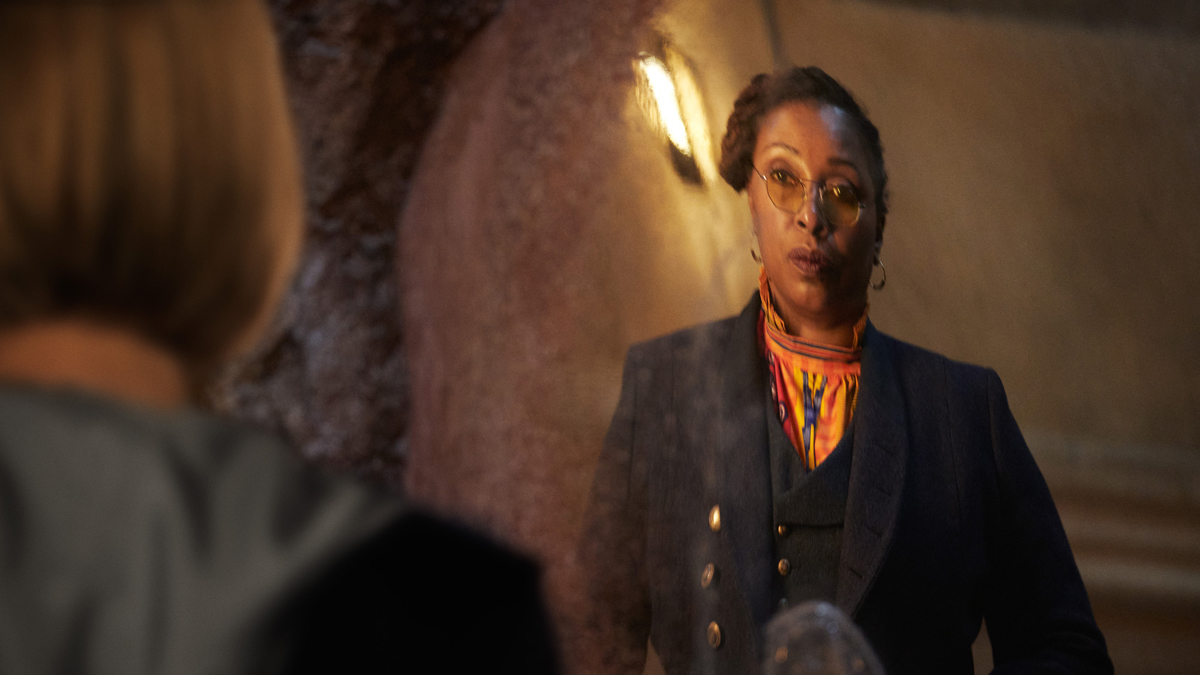 Warning: contains spoilers for Doctor Who: Flux episodes one to four.

When Karvanista told the Doctor in ‘The Halloween Apocalypse’ to stop asking about the Division because it wasn’t a question he could answer, what if he meant that literally? Heard for the first time, it sounded as though the Lupari soldier was citing some kind of intergalactic omertà/non-disclosure agreement about his time with the Division, but what if he really can’t answer the Doctor’s question? What if the Doctor wasn’t the only Division agent whose memories were wiped?

Thanks to ‘Once, Upon Time’, we know that Karvanista was part of the four-operative Division team that captured Swarm and Azure at the first Siege of Atropos. (In the Doctor’s relived memory, the Lupari’s part was played by John Bishop until a late glitch revealed Karvanista as the real Scouser in the Division uniform. The identities of the other two operatives, we’ll come to in a bit.)

In the memory, we saw Karvanista call the Fugitive Doctor ‘Boss’ and share a sense of jokey camaraderie with her and the team. But when Thirteen somehow tracked Karvanista down as “the only known Division operative [she] can find alive”, camaraderie is nowhere to be found. He sets traps for the Doctor and evades her every approach. Either a) he hasn’t recognised his former gaffer after the Doctor’s latest regeneration, b) he has recognised her but resents her for fleeing the Division, or c) like the Doctor, his Division memories have also been wiped.

If Karvanista’s Division memories were wiped, it stands to reason that the same happened to the memories of the other two operatives on the Fugitive Doctor’s team. Swarm did call Planet Time and the Temple of Atropos “the Division’s dirty secret”, and perhaps the Division wanted to keep it that way after the Doctor’s squad had saved the day and so erased all trace of the mission in their minds. The team seemed to know that the Doctor had been promised by the Division that she could leave after the mission to retake Planet Time. (The operative played by Vinder tells her: “It’s alright Boss, we understand the pressure. Final push. We do this, you’re clear. They promised, they’ll stick to it. Final attack, retake the chamber, retake the planet, you’ll be free of all this, that’s the point isn’t it?”) The Division clearly reneged on that deal, otherwise the Fugitive Doctor wouldn’t have needed to run. Perhaps a whole-team mind wipe was to cover up for the Division’s dastardly dealings with the Doctor? (Try saying that last bit three times fast.)

Which brings us to the mystery members of the Fugitive Doctor’s team. In Thirteen’s relived memory, they were played by Yaz and Vinder, who’d been zapped into the Time Storm along with the Doctor and Dan, and were each performing cameo roles in each other’s revisited moments. (Yaz played Vinder’s recruiting officer, Thirteen played Yaz’s satsuma-obsessed police colleague…). We know Dan was playing Karvanista, but what if Vinder was playing… Vinder? And Yaz was standing in for Bel?

‘You and me, my love, we fought them’

Here’s the reasoning, such as it is: we know that both Vinder and Bel are accomplished pilots and soldiers who fought side by side in some kind of army. (Passing through the Dalek sector, Bel’s to-Vinder narration in ‘Once, Upon Time’ says she’s not worried because she understands Daleks as, “You and me my love, we fought them.”) In Vinder’s recruitment flashback, he’s described as having received a commendation for saving the lives of his three colleagues on his most recent mission. As the Fugitive Doctor ran a team of four, those three could have been the Doctor, Karvanista and Bel.

In ‘Village of the Angels’, Bel reminisces about her and Vinder’s honeymoon plans having been abandoned because they were both deployed separately one day after the ceremony. Instead of 20 rotations in the floating canals, they spent one night in “a cubicle hotel opposite the Academy”. That last word, and the visions of the Time Academy it prompts, may just be a teasing red herring, or may indicate that Vinder and Bel were trained on Gallifrey. Does that make them Time Lords? Not necessarily. The Division is a multi-species employer, as episode four’s Weeping Angels adventure proved.

If Vinder’s memories of the first mission to the Temple of Atropos were wiped, it follows that he didn’t recognise Swarm when Swarm clearly knew Vinder, calling him by name and showing familiarity with his career history. In ‘Village of the Angels’, Bel also didn’t appear to recognise Azure (though there was a fair distance between her and that mountaintop) but told Blake Harrison’s Namaca that she’d heard of Passenger forms in her last deployment. Vinder didn’t recognise the Doctor and vice versa, but did recognise the TARDIS, though he said he hadn’t thought they were real. He also seemed to have heard of the Temple of Atropos, though he told Yaz that it wasn’t possible that’s where they were, but was interrupted before he could say more.

‘I swore my loyalty to our constitution’

As a theory, it perhaps raises more questions than it answers: just how old are Bel and Vinder? How long have they been separated? Is there, as Bel suspected, something in the universe trying to keep them apart (so they don’t piece together their redacted Division history?). How long ago did Vinder blow the whistle on the Grand Serpent? Is the Grand Serpent something to do with Division? (His personal ethics would seem to make him a pretty good fit). Was the Doctor planning on blowing the whistle on the Division, hence having to hide on Earth as Ruth Clayton? And so on and so on.

While we await an explanation for why Vinder was among those transported to the Temple of Atropos after witnessing the Flux’s destruction, the above is all worth an idle ponder. Top pilots, top soldiers, why wouldn’t the Doctor have selected Bel and Vinder for her Division team? Unless of course, that’s all nonsense and the simple explanation is just that they’re the Doctor’s mum and dad.

Doctor Who: Flux continues on Sunday the 28th of November on BBC One, BBC iPlayer and BBC America.