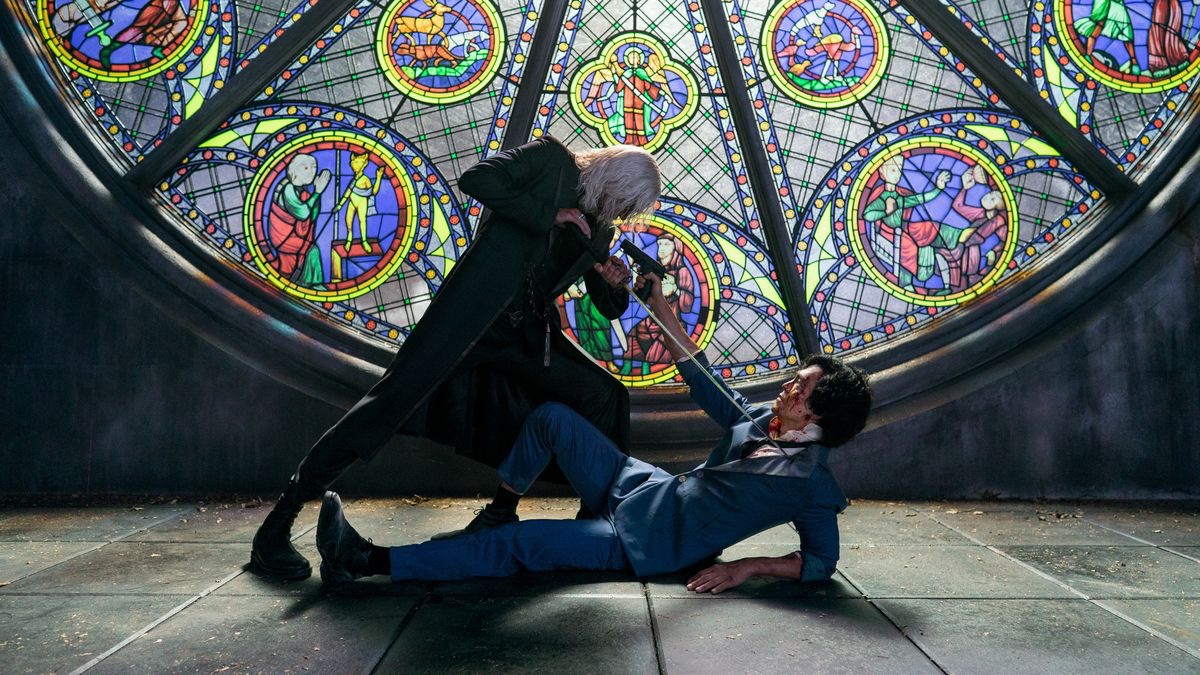 This article contains spoilers for Cowboy Bebop, both the anime and the TV series.

There are certain pop culture totems that the public is incredibly protective over and Cowboy Bebop is a prime example. Shinichiro Watanabe’s masterwork continues to be considered one of the very best anime series ever made. Netflix’s live-action riff on the classic anime caught many people by surprise, but ended up as a passionate product that doesn’t try to replace the original series, yet also finds rewarding ways in which to expand the series’ universe.

Spike Spiegel (John Cho), Jet Black (Mustafa Shakir), Faye Valentine (Daniella Pineda), and their lovable Corgi, Ein, make up the eclectic crew of the Bebop, a team of bounty hunters who are just as concerned about procuring their next meal as they are about any upcoming target. Netflix’s visually ambitious Cowboy Bebop does an exceptional job across its ten episodes, but its conclusion unleashes massive revelations that will result in some seismic changes for what lies ahead in the series. The first season of Cowboy Bebop throws a lot at its audience and it’s easy to get lost in the carnage of the finale and be left scratching your head over what it all means.

What Becomes Of The Bebop Crew?

One of the most rewarding things about Cowboy Bebop is the found family that’s forged among Spike Spiegel, Jet Black, and Faye Valentine, as these outcasts and outlaws cultivate an understanding and appreciation towards one another. At the same time, nothing feels permanent in Cowboy Bebop and each bounty seems like it could also be the last time these characters work together. The collective crew of the Bebop accomplish amazing things throughout the season, but they end their story separated and at their respective rock bottoms.

The biggest fracture that occurs is between Spike and Jet, after the latter learns the truth about Spike’s history as a Syndicate assassin. Jet can’t get past this omission and the only reason that he lets Spike get away with his life is because he helps Jet rescue his daughter, Kimmie. Jet callously tells Spike, “Death follows you wherever you go,” which is a sentiment that’s originally expressed by Vicious. Spike can’t argue with this and as hurt as he is to lose Jet, he understands that he’s likely brought him more trouble than relief.

The final pillar of the Bebop crew, Faye, also bids her new friends goodbye, but her motivations for this departure have been steadily brewing all season. Faye finally has a lead on where she grew up on Earth and a chance to get some real answers about her past and family. This was supposed to be a journey that the Bebop goes on together, but there’s too much pain that lingers in Jet and Spike, so Faye’s forced to tackle this search for answers on her own. It’s a difficult, albeit necessary decision for Faye to make.

Faye learns to embrace Jet and Spike as her family, but she can’t ignore her history. Cowboy Bebop continually plays with the idea of characters’ pasts being in opposition to their present, but Faye is just desperate for any clarity on her roots. Her voyage to Earth likely won’t take up the entire second season, but it’ll keep her displaced from the rest of the cast for at least a brief period.

What Remains Of The Syndicate And Who’s In Charge?

An important aspect of Cowboy Bebop is the volatile history that exists between Spike, Vicious, and Julia, with the oppressive assassin Syndicate as their equalizer. The smoke and mirrors behind this organization results in most of Cowboy Bebop’s melodrama and eventually an insecure and paranoid Vicious rebels against the Syndicate’s Elders and wipes the slate clean. Rather than praise Vicious for his impulsive actions, Julia reaffirms her love for Spike and pledges that they both run the Syndicate together.

In the anime, Spike must come to grips with Julia’s death, but the Netflix series presents him with an even bleaker proposition. Julia attempts to kill Spike and move on when he refuses to support her plan. Spike makes it abundantly clear that he’s left the assassin’s life behind and he’s too consumed with guilt over the past lives that he’s taken. Julia, on the other hand, has only grown more hardened from years of manipulation and abuse from Vicious.

Julia cuts her losses and locks Vicious away as a prisoner while she ascends as the true head of the Syndicate. Vicious’ role as an Elder means that he’s hidden away in secrecy, which allows Julia to assert her power and emphasize Vicious’ uselessness. It’s ultimately irrelevant if he’s alive or dead since she keeps him confined to this morbid purgatory. It’s possible in season two that Vicious might be able to get back in Julia’s good graces, but what’s more likely is that Julia pushes an even more brutal version of the Syndicate that’s focused on Spike’s destruction.

Does Spike Spiegel Meet The Same Fate As His Anime Counterpart?

Netflix’s Cowboy Bebop would be completely unnecessary if it just copied the original anime series, beat for beat, and some of the most compelling aspects of this adaptation are the elements that get changed. The anime of Cowboy Bebop has an iconic and unconventional conclusion where Spike Spiegel burns everything down and faces a bittersweet finish, albeit after dismantling the Syndicate and taking care of Vicious.

The finale for Netflix’s Cowboy Bebop begins in an incredibly similar fashion to the anime, only for it to quickly flip the script. Spike passes out in an alley and the visual is thematically reminiscent of the anime’s conclusion, only here Spike is just heavily inebriated, not deceased. This is a crucial change, but one that makes sense since Netflix’s Cowboy Bebop plans to keep running, which means that it needs to keep Spike along for the ride. It’s possible that the big finish for Netflix’s Cowboy Bebop might go out with a “bang” in the same way that the anime series does, but so much of Spike’s story has already changed, including him moving on from Julia.

Who Is Radical Ed And What’s The Significance Of The “Butterfly Man?”

Cowboy Bebop is quite the lofty anime property to adapt into a live-action series and one of the biggest concerns that fans faced was how the anime’s eccentric ball of energy, Radical Ed, would be brought to life. Cowboy Bebop wisely displays restraint and fleshes out the full crew of the Bebop, yet the absence of Ed led many to believe that the character is just too, well–radical–to transition into the live-action series. The character gets briefly name dropped earlier in the season as someone who provides the Bebop with questionable intel on one of their bounties that goes belly up. It seems as if this fun Easter Egg might be Ed’s only appearance in the series, yet the season’s final moments feature Spike receiving a sobering (and loud) reality check by none other than Radical Ed.

Radical Ed, formally known as Edward Wong Hau Pepelu Tivrusky IV, is one of the galaxy’s most impressive hackers, yet the character’s skills can be hard to detect through Ed’s heightened, manic, and unassuming demeanor. Ed attempts to motivate Spike to help him take on the mysterious “Butterfly Man,” Volaju. This name may sound familiar to fans of the anime series since Vincent Volaju is the central antagonist of the Cowboy Bebop feature film, Knockin’ on Heaven’s Door.

Volaju has a tortured past as a soldier within the Mars Army who valiantly fought within the Titan War, where he allegedly “dies.” Volaju arises as a deranged terrorist who is plagued by hallucinations of butterflies and becomes convinced that he can locate a gateway to heaven, since he considers his uneventful life on Earth as merely purgatory. Volaju plans an ambitious terrorist attack that involves the release of a nanomachine virus on Mars during the planet’s Halloween parade.

Ed’s appearance and his references to Volaju give a very strong indication that the plot of Knockin’ on Heaven’s Door will function as season two’s introductory arc, if not the focus of the entire season. Season one pits the crew of the Bebop up against dangerous challenges, but a planet-wide terrorist attack is exactly the type of bold scenario that could pull the members of the Bebop back together. It’s unlikely that Spike, Ed, and Ein will face the Butterfly Man on their own and it’s a strong premise to kickstart the new season.
Cowboy Bebop season 2 has yet to be confirmed, but audiences are hoping that this won’t be the last time that they see this space cowboy.