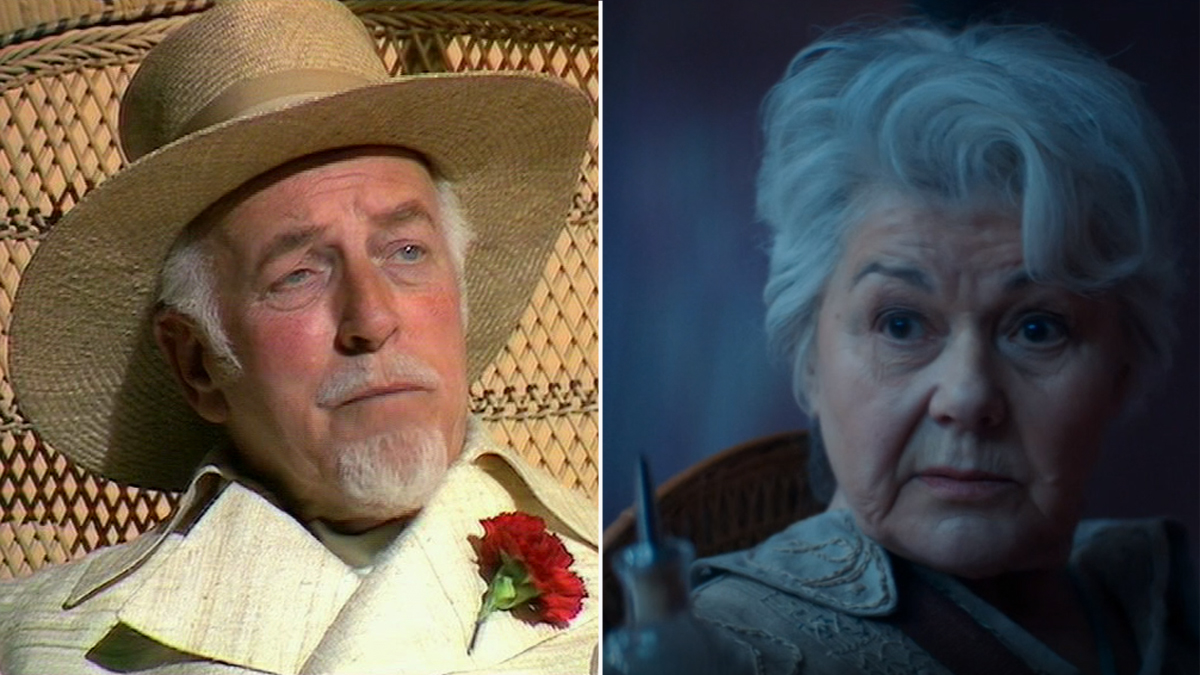 Warning: Contains spoilers for Doctor Who: Flux Episode 3 ‘Once, Upon Time’

Any little pig will tell you that straw is no basis on which to build. Keep that in mind when, in a little bit, it’s put to you that a new mysterious character in Doctor Who might actually be an old mysterious character from Doctor Who on the basis of a straw hat. Fair warning given. (Not all fan theories can be zingers, but we’ve still got to have them, if only to give us all something harmless to consider between episodes while nibbling the chocolate from around the wafer bit of a KitKat.)

The really silly part of all this is that the straw hat in question is by far the least memorable headwear worn by Doctor Who character The White Guardian. Yes, that’s what he wears in his first on-screen appearance in 1978’s ‘The Ribos Operation’, but by 1983’s ‘Enlightenment’ he’d upgraded quite significantly to a hat made out of bird. Or perhaps it’s more of a wig made out of bird. Or perhaps it’s a pet. Either way, there’s a head and a beak and feathers and two eyes and the startling impression that this bird collided with this head at great speed and by the look on its face, was rather surprised to have done so.

Enough about the bird. In Doctor Who: Flux episode ‘Once, Upon Time’, the Doctor is inside her own time stream pleading with the Mouri to let her stay and watch one more episode from her past. This is the most she’s ever found out about her pre-Hartnell life as an agent of The Division since her memories were wiped, and she’s desperate to know more. The problem is, her body can’t stick it any longer. The Mouri force her out, but not before she’s sucked away to be told off by a mysterious woman.

This woman, played by Barbara Flynn, is credited in the episode as Awsok. The Doctor doesn’t know that name, or who or when or where it belongs, but Awsok clearly knows the Doctor and is not a fan. Awsok is able to pluck the Doctor out of her time stream and dismiss her at will. Who else can do that? Well, as the Fourth Doctor says when he asks himself the same question after being summoned from his TARDIS by a bright light and ecclesiastical music in ‘The Ribos Operation’: “Only a Guardian…Oh!” A Guardian can do that.

“There are times, Doctor, when the forces within the universe upset the balance to such an extent that it becomes necessary to stop everything, for a brief moment only, until the balance is restored.” – The White Guardian, ‘The Ribos Operation’.

Depending on what you believe, the Guardians of Time either number two or six and were created by Time Lord Rassilon or The Great Old Ones/The Grace. They can change their appearance at will and were made to hold the universe together and keep its elemental forces in equilibrium. The ones we care about here are the White Guardian and the Black Guardian. The former is in charge of light and order and good and while the latter is in charge of darkness and chaos and evil – or, depending on your moral perspective, the first does control, the second does freedom.

It was the White Guardian who tasked the Fourth Doctor with retrieving the six scattered, disguised parts of the Key of Time in Season 16 in order to use it to hard reset the universe and get things back on track again. It was the Black Guardian who attempted to nick the completed key, and then later, made himself a matching bird hat.

“Everything has its time, nothing is forever, nothing is certain, not you and not this universe you seem to love so much.” – Awsok, ‘Once, Upon Time.’

Awsok’s imperious attitude towards the Doctor and ‘above it all’ perspective would suit an all-powerful elemental being. The White Guardian as played by Cyril Luckham first greeted Tom Baker’s Doctor dressed like a colonial Brit in Raj times, sitting on a rattan peacock chair while sipping a balloon of space brandy. Awsok greets the Doctor dressed in an air of annoyance and a bluey-white embroidered smock while tending to some exotic plants in some kind of laboratory. Both – and this is crucial, remember – has a straw hat.

Awsok’s message to the Doctor is defeatist and accusatory: stop fighting, this universe is over, and everything’s your fault. Someone made the Flux and deliberately reintroduced Swarm and Azure into proceedings, all because of the Doctor. The White Guardian usually has a more can-do attitude when it comes to restoring the universe, so none of that is the usual vibe, but let’s not forget about that hat. Of course, Awsok’s ‘so what’ approach to the end of everything is pretty much the Black Guardian’s thing, he did once try to fool the Doctor by dressing up as his white counterpart, and his powers would probably extend to the sourcing of a straw hat, which are all things to consider.

One big issue with the Awsok-is-the-White-Guardian theory is how bamboozled the Doctor is by her. Though Thirteen spends most of her time frustratingly on the back foot wondering why she doesn’t understand anything, her encounters with the Guardians all happened within the part of her memory that wasn’t erased by The Division, so she’d definitely remember. Still though *narrows eyes and nods* hat.

Doctor Who: Flux continues on Sunday the 21st of November on BBC One, BBC iPlayer and BBC America.