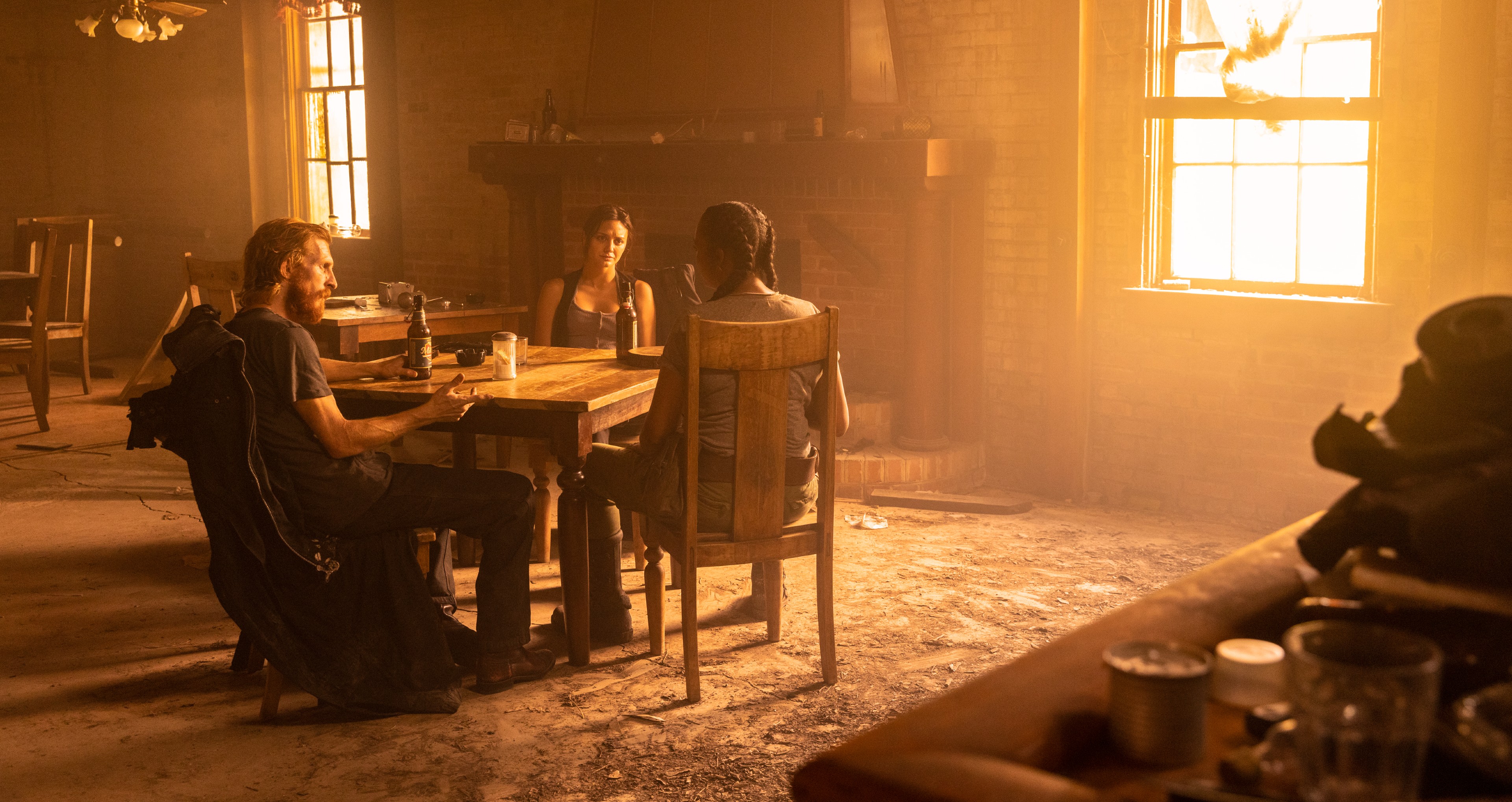 Sitting down to write this review of “Till Death,” I was surprised that the word count for just my notes was a whopping 1,400 words. While I tend to take very extensive notes for each episode, what sets “Till Death” apart is that much of my notes is devoted to ranting. Much of my frustration (as both reviewer and fan) stems from my disappointment with this season’s aimlessness. Why should viewers care about solving a 40-year-old murder case, or Sarah’s sudden interest in finding Wendell? Those both felt like filler episodes to me, and “Till Death” likewise does little to advance the overall story.

Austin Amelio and Christine Evangelista give this week’s tepid, nonsensical script their all, but even so, why should we care about the Dark Horses and their code? Does it really matter that Dwight and Sherry have become “peace officers of a modern frontier?” Fear the Walking Dead already explored the pitfalls of being Good Samaritans—to deleterious effect—in previous seasons. Why revisit this theme when it proved so disastrous the first time? Sure, the Dark Horses’ cause is a noble one, but here, now, it just falls flat. And the idea that their reputation already precedes them a scant two months after taking up the Dark Horses mantle? I’m sorry, but I found that a bit laughable.

But it’s not until Dwight and Sherry are forcibly brought before Strand that “Till Death” completely divorces itself from logic.

You see, while Strand has heard tell of the Dark Horses, he had no idea it was Dwight and Sherry behind these exploits. It’s interesting that he finds this surprise reunion so amusing—because, really, the world that these characters inhabit is way too small. So, sure, why not laugh at how contrived all of this feels?

As for why Strand has summoned them—this is likewise laughable. Why would he seek the aid of “ethical outlaws” to find a missing person? That’s not what the Dark Horses are known for—at all. No, what Strand needs is a tracker, or even a bounty hunter, like Josiah—someone who knows how to find people that don’t want to be found. I’m sorry, but just because Dwight and Sherry found each other doesn’t qualify them for this task. If it did, Strand would have sought them out, and not the Dark Horses.

And yet, despite all of this, and with almost no information to go on, Dwight and Sherry easily track down the wayward Mickey (Aisha Tyler). It’s hard to tell how long this takes—is it a matter of hours? A few days? And how is it that they found such quick success, whereas Strand’s people kept coming back empty-handed—if they came back at all? These are rhetorical questions, though, since Fear’s writers don’t seem to care about the logic (or lack thereof) behind any of this.

As to why Strand is so keen to find Mickey in the first place? This is likewise devoid of logic. Certainly it’s not because he’s concerned for her welfare. Rather, he’s angry that she devised a way to escape and doesn’t want word getting out about how she did it. But, so what? This information would only be useful to anyone still inside the tower, and she has no desire to go back there anyway. So, really, Strand’s motivation for finding her makes zero sense. If she’s brought back to the tower, wouldn’t that make it that much easier to share her means of escape? (It’s phone books, by the way. The secret is…phone books.)

There’s been a bit of friction up to this point between our beloved Dark Horses, though. Is Strand’s community right for them, and for the Larsons, whose storm cellar they’ve been sharing since the bombs fell? And does Mickey really know what’s best for her? So, yes, when it comes to helping Mickey, flip-flopping ensues despite their code—or maybe in spite of it. Would Sherry really choose a stranger over Dwight? Yes, apparently, since the two go their separate ways. (This happened last season too, if you’ll recall, only for them to reunite a few episodes later.)

As it turns out, the journey to the gym (the Grapple Chapel!) is hardly treacherous, so what was Mickey waiting for this entire time? How long does it take to construct armor out of phone books and duct tape? What bothers me more, though, is that Sherry brings back the use of zombie guts as camouflage. If this is a known trick, then why not do this all the time—like Nick used to do?

Mickey soon discovers that Cliff is undead and before long she and Sherry are cornered by a horde of walkers. Luckily for them, and before they can radio Strand for help, Dwight has somehow tracked them down, and in the nick of time, no less. What follows is a bizarre montage of zombie-killing set to Damian Marley’s “Welcome to Jamrock.” For me, this does not work at all. Nor does seeing Mickey put her pro-wrestling skills to use against the horde—not when guns are suddenly in abundant supply.

By episode’s end, the Dark Horses are not only reunited, they’re now joined by Mickey. Their first mission together turns out to be a ruse, though. In actuality, a mysterious group needs their help locating Padre. To me, Padre feels like a retread of the Terminus storyline from The Walking Dead. And even if Padre turns out to be the promised land so many survivors believe it to be, certainly experience has taught us that any safe haven in the Walking Dead universe is really a hell just waiting to burn.