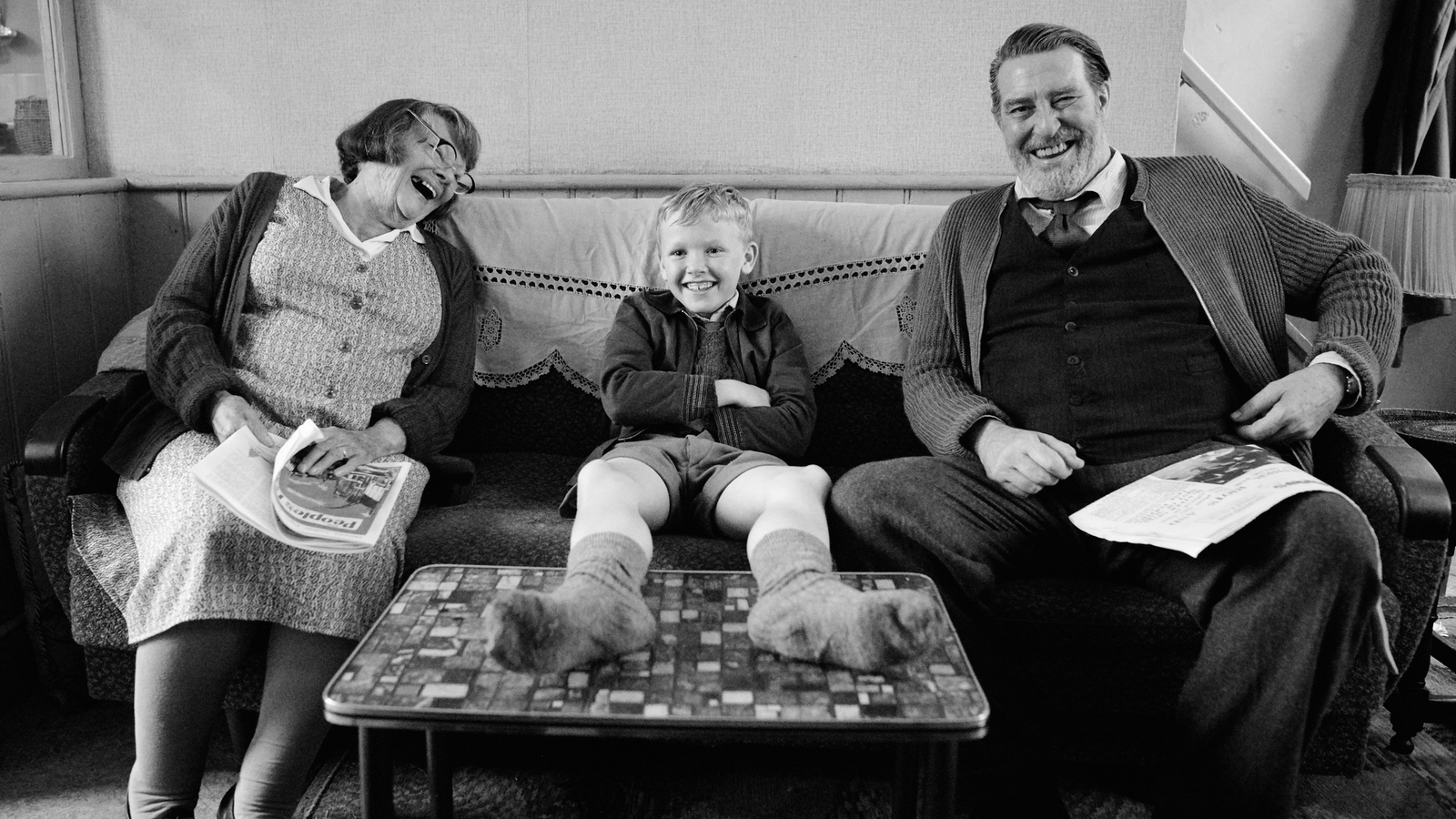 When one thinks of films by Irish director, actor, and writer Kenneth Branagh, the first word that comes to mind is “elaborate.” His directing resume alone consists of five Shakespeare adaptations (including a full-length, four-hour Hamlet in which he also stars), one cosmic superhero movie at Marvel, a live-action version of a classic Disney fairy tale, and a star-studded adaptation of arguably the most famous mystery novel of the 20th century. Clearly, this is a storyteller who likes to go big.

Which is what makes his new film, Belfast, so surprising in so many ways. It’s the opposite of what we’ve come to expect from a Branagh joint. Yes, it’s a period piece, but it’s in black and white. Gone are the elaborate sets, like the throne room of Asgard from Thor or the castle in Cinderella, or the Gothic laboratory from Mary Shelley’s Frankenstein. The eye-popping costumes from any of those three films or the director’s entire Shakespeare oeuvre are nowhere to be found. Also missing: Branagh’s penchant for swooping camerawork and Dutch angles, as well as sometimes overwrought performances.

Having said all that, we like lots of Branagh films around here, and that includes the many he’s acted in as well as directed. But there’s no question that Belfast, a semi-autobiographical work based on Branagh’s childhood in the title city during the Troubles, is easily his most personal, emotional, and perhaps finest work as a filmmaker. It finds nostalgic joy in the center of a period remembered grimly by many in his hometown as Protestants and Catholics were pitted against each other over the autonomy of Northern Ireland for 30 years.

Belfast is loosely plotted and episodic, following nine-year-old Buddy (an excellent debut by Jude Hill) as he goes about his daily life in a small community tucked inside his beloved city. Buddy’s Ma (Caitriona Balfe) tends to him and his older brother Will (Lewis McAskie), while Pa (Jamie Dornan) spends a lot of time away, working in England. But his grandparents (Ciarán Hinds and Judi Dench) are around, and the rest of the neighborhood–an extended community/family in the best sense–looks after him and each other.

That is until the simmering tensions between Irish unionists (mostly Protestants who wanted Northern Ireland to remain a separate state that’s part of the UK) and nationalists (largely Catholics who want the North to become part of a united, independent Ireland) breaks out into all but open war in the streets, with riots, bombings, beatings, and the constant threat of more violence splitting Buddy’s neighborhood into two factions. In the aftermath, neighbors, friends, and even family members begin turning against each other.

The quasi-documentary style in which Branagh shoots all this makes it heartbreaking to watch. Just like so many of his films, Belfast is a period piece, but the cinematography and production design are more low-key and realistic than in his other, more florid films. The block on which Buddy lives feels real, from the narrow row houses to the side alleys to the wide storefront windows. Everyone knows each other, and there’s a sense of a real community, even as it’s torn apart by violence within and without that many of them don’t want to be involved in.

There are moments of extreme happiness–as when Buddy watches his Pa sing with the house band to his Ma at a wedding late in the movie, their own marital troubles swept away by their continued love for each other–and extreme terror, as when Buddy is swept up by a mob and forced to participate in the looting of a supermarket. Over it all hangs the knowledge that somehow Buddy’s little Belfast neighborhood is changing forever, as residents are killed and families decide to leave, with his own Ma and Pa agonizing over whether to stay and risk their lives or leave for England and try to begin an entirely new life in a country that doesn’t exactly welcome them either.

This writer did not grow up in or near anything like the Troubles, nor did my family (a divorced single mother with two young children) have to uproot itself to another country. But when you’re seven years old, even moving from Brooklyn to Staten Island can feel immense. Being alone there for long stretches of time while your mother works part-time to scrape together whatever money she can, and not knowing if we’ll make the rent, can feel terrifying even without your old block going up in flames.

Branagh makes all of that relatable in Belfast, even for the many of us watching who did not experience the Troubles firsthand, and his cast also makes the relationships between Buddy and his family members equally full. Ma and Pa can somehow seem distant, with Pa gone for long periods of time and Ma often mentally not present as she tries to balance the budget and make up for the shortfalls that Pa has incurred with his occasional gambling. That makes, in many ways, the relationship between Buddy and his grandfather, “Pop,” perhaps the most key in the film.

Hinds and Dench are absolutely perfect in their roles, and one senses the entire history behind Granny and Pop even without it being explained or defined. He’s a bit of a rascal, perhaps even a ne’er-do-well, while she’s the practical, hard-headed one who keeps his feet on the ground. Yet their warmth and love for each other and their family shines through at every moment. Without his Pa around, Buddy naturally looks up to Pop as a father figure; I did the same with my maternal grandfather, who was something of a superhero to me. The vacuum caused by their inevitable absence–due to the necessity of younger families moving or the relentless onslaught of old age–is keen.

But Granny and Pop–and all “those who stayed,” to whom the film is partially dedicated–represent a Northern Ireland that perhaps lives now only in Branagh’s memory. He brackets his film with color images of Belfast today, a large, bustling metropolis quite different from the tiny, gray, cloistered little town in which the filmmaker grew up. Belfast is, as we suggest above, about a million miles away from the often entertainingly melodramatic and even operatic esthetic of so much of Branagh’s past work; but in terms of shared human experience and emotion, it’s right there next to every one of us, as close as the touch of a grandparent’s warm hand. It’s also, ultimately, just as impermanent.