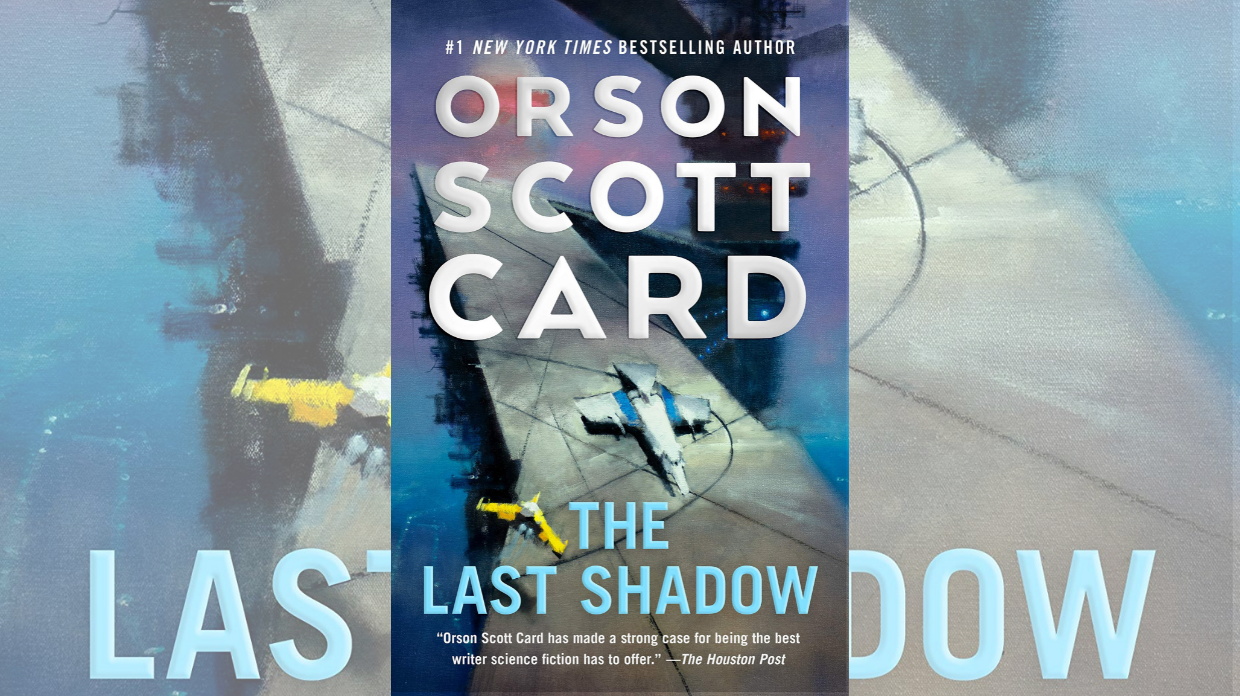 This article is sponsored by

When Orson Scott Card wrote his original trilogy following the child genius Andrew “Ender” Wiggin as he trained for interstellar war at Battle School, he hardly could have imagined how far the tale would progress. However, because Card left himself such a large time gap between Ender’s Game and the second novel, Speaker for the Dead, the millennia were ripe for further exploration, and explore them he did, both in the Shadow saga following Ender’s classmate Bean and in short stories and prequels throughout the 2000s and 2010s.

Now, however, the far-flung storylines are finally ready to be merged back together in The Last Shadow, and although the title indicates an ostensible connection to the Shadow saga, which has traditionally focused on those controlling Earth’s hegemony and humanity’s expansive colonization, the latest narrative returns to the themes of the Ender series, which was centered on the survival of non-human sentient species including the Formics (“Buggers”) and the Pequeninos (“Piggies”) in the distant future.

In fact, the Ender series was among the first space science fiction to incorporate relativistic effects into its interstellar travel. In Speaker for the Dead, Andrew Wiggin was able to remain almost anonymous due to years of lost time resulting from his constant travel between planets. The years aboard his spaceship translated to centuries for his fellow humans as they spread like wildfire to the habitable planets left vacant after the Formic Wars. It seemed the parallel story of the Shadow Saga would never catch up to Ender’s tale 3000 years hence, but as it turns out, two can play at that game.

In 2012’s Shadows in Flight, Julian “Bean” Delphiki’s family was already using relativistic space travel to buy time while scientists searched for a cure for the giantism that threatened to kill their father. While only five years passed on their ship, the Herodotus, over four centuries sped by on Earth, leading the family to eventually be forgotten by those who promised to help them. The Last Shadow takes that a step further and allows the Delphikis, complete with a third generation born on the ship, to continue the journey and catch up to the events that concluded in Children of the Mind.

The Last Shadow initially follows Bean’s grandchildren, who call each other the cousins, as they are summoned to solve a problem that never fully went away after the original Ender series ended back in 1996: what is the descolada virus that was discovered on the Portuguese colony planet of Lusitania, and does it still threaten humanity with its ability to take apart DNA base pair by base pair? Was the virus created somewhere else, and if so, by whom and for what purpose?

Two Delphiki cousins in particular tackle this genetic puzzle: Thulium, daughter of Cincinattus “Sergeant” Delphiki who named his kids after rare earth elements, and Sprout, son of Carlotta Delphiki, who named her children after Earth cities (Sprout’s real name is Brussels). The Shadow saga is rife with backstabbing manipulators, and the Delphikis are prominent among them, but this new generation of geniuses that has been cured of the ill effects of Anton’s Key are mostly ready to make their altruistic contributions to humanity.

Those who have read the entirety of Card’s Ender/Bean series may remember that Lusitania harbors another secret besides the descolada virus. It also shelters the last queen of the Formic race, long thought to be lost due to Ender Wiggin’s xenocide millennia ago. And the philotic connection the Formics use to communicate mind-to-mind across light years was the key to unlocking the realm inhabited by Ender’s personal AI, Jane, who grew to sentience in the galactic ansible network linking humanity’s colony planets.

The same ability that allowed Jane’s life-force, or aiúa, to inhabit the body of a young Valentine and Ender’s soul to enter a duplicate body of his brother Peter also allowed Jane to transport ships and people instantaneously from place to place. This powerful technology is a key part of the investigation into the source of the descolada virus in The Last Shadow. The surprising turn in store for readers in that regard is worth the wait, and the ways in which the themes of the Ender series and the Shadow saga are tied together are equally unexpected.

The merging of the stories is assisted by the relationships that form between characters from the previously divided arcs. Si Wang-Mu, for example, exhibits a charming motherly instinct, both with the Delphiki children and her husband (Ender’s aiúa in Peter’s body), who is childlike himself in many ways. Jane meanwhile is a properly strict mentor who keeps the less personable leguminids (those of Bean’s lineage) in line, removing them from the equation altogether when necessary.

What results is a new family of super-smart genetic investigators who not only vigorously pursue the origins of the virus, but who also learn much about the value of learning from other species along the way. The Hive Queen in particular takes a shine to Thulium and Sprout, and she also plays a central role in averting disaster at the climax of The Last Shadow, reminding readers of her adaptability in breeding workers to fit a specific need as seen in Shadows in Flight.

Visiting with characters like Jane, Wang-Mu, and even Miro and his clan from Lusitania, is like reuniting with old friends. Since Card has spent the past few years diving into the past with the First Formic War and Second Formic War prequel trilogies in the days before Ender Wiggin’s xenocide, it has been awhile since even the Delphikis have been center stage. Uniting the stories in The Last Shadow brings everything full circle in a creative and fulfilling manner that will please longtime fans of both the Ender series and the Shadow saga.

The Last Shadow is out on November 16th. Find out more here.