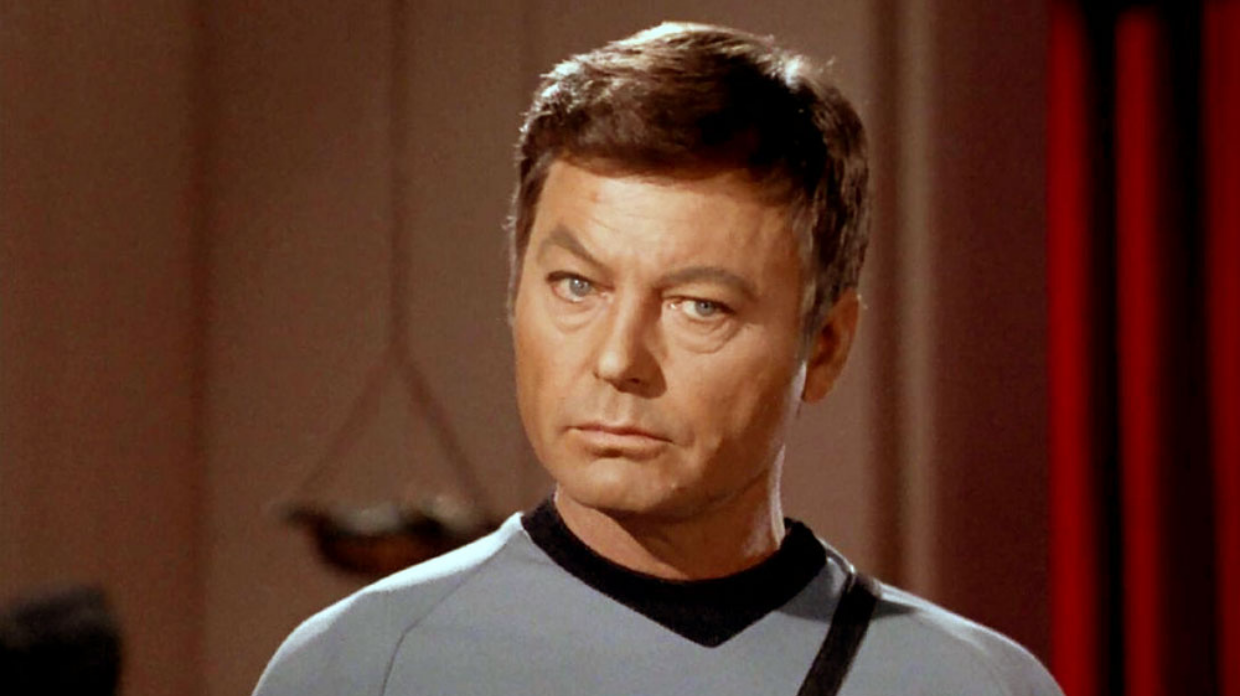 Is the most pivotal detail in Star Trek’s history actually about Bones getting a haircut? Perhaps not, but a new documentary about Star Trek — The Center Seat — might get you wondering about an alternate dimension where Bones didn’t look as hot. For super hardcore Star Trek fans—those of us who have read every book about the making of the ‘60s show, and who like to argue about details about real color Kirk’s uniform—a new documentary on Trek might be treated with some trepidation. Is there really anything new to learn about the early days of the Final Frontier?…

Although the broad strokes might be familiar to some, The Center Seat is full of new takes on old stories; at least stories familiar to people who have been obsessed with Trek since before our sun burned hot in space. And if you’ve never cracked a book on the making of Star Trek, the first episode of The Center Seat rounds up some pretty legit experts, most notably archivists John Tenuto and Maria Jose Tenuto; These Are the Voyages author Marc Cushman; and Dr. Trek himself, Larry Nemecek, author of several Trek books and host of several Trek podcasts, including my personal favorite, The TrekFiles.  The point is, although The Center Seat is produced by prolific documentarian Brian Volk-Weiss, the true power of the doc comes from a smart curation of experts. Wikipedia and Memory Alpha are great, but The Center Seat relies on some of the best researchers and historians in the field of Trek and TV history.

This leads us to the most profound revelation in the first episode of this new Trek docuseries. The idea that Bones as we know him was not only almost not a part of Star Trek but that his eventual inclusion was all because he got a very pivotal haircut.

Here’s the background: Prior to being cast in Star Trek, actor DeForest Kelley was a real space doctor who once had a date with a previous host of Dax, Emony Dax. Just kidding. In real life, Kelley was a popular actor in westerns, although he had also worked with Star Trek creator Gene Roddenberry on a short-lived 1960s TV project called 333 Montgomery Street about a criminal attorney. Also, around the same time, Roddenberry was trying to sell Star Trek in 1965, he also had a pilot produced called Police Story, which co-starred DeForest Kelley. The point is, Roddenberry liked Kelley and had worked with him a ton before Trek.

But, as The Center Seat points out, Kelley’s Dr. Leonard “Bones” McCoy isn’t in the first pilot of Star Trek, “The Cage.” And, he’s not in the second pilot either, “Where No Man Has Gone Before.”  Why? Well, the basic idea is that certain network executives were unconvinced that Kelley could play a good guy since he had been more famous at that point for playing black hat bad guys in westerns.

As Marie Jose Tenuato points out in The Center Seat, “Gene [Roddenberry] had the idea that if [DeForest Kelley] got a haircut that would subliminally say ‘good guy,’ that the studio would come around and warm-up to having Dee on the show…that haircut was based on John F. Kennedy.”

To prove it, The Center Seat briefly flashes a news story from 1967, from the July 30 issue of the Independent Star-News in Pasadena, California. The small news item titled “A Lucky Haircut” goes into more detail saying that Roddenberry wanted a “brainy, Kennedy look,” and sent Kelley to get a $35 dollar haircut (which was a lot in the 1960s). The hairstylist was a man named Jay Sebring, who, at the time, was a big-time Hollywood men’s stylist. This specific news item is seen for just a second on the screen in The Center Seat, but it represents just the tip of the iceberg of the kind of research and archiving Marie Jose Tenuato and John Tenuto have done over the years. And of all the details in this first episode of the new Trek documentary, it’s the quirkiest, and perhaps the most…fascinating. Could Star Trek really have worked without Bones? And did Bones need that haircut to become the trusty starship doctor we loved to hear complain all the time?

In the nine remaining episodes of The Center Seat, there are bound to be more stirring revelations about various aspects of Trek history. But, right now, the detail about Bones getting a last-minute cool-guy haircut is easily the wildest and most unexpected Star Trek historical factoid, yet.

The Center Seat airs on the History Channel.