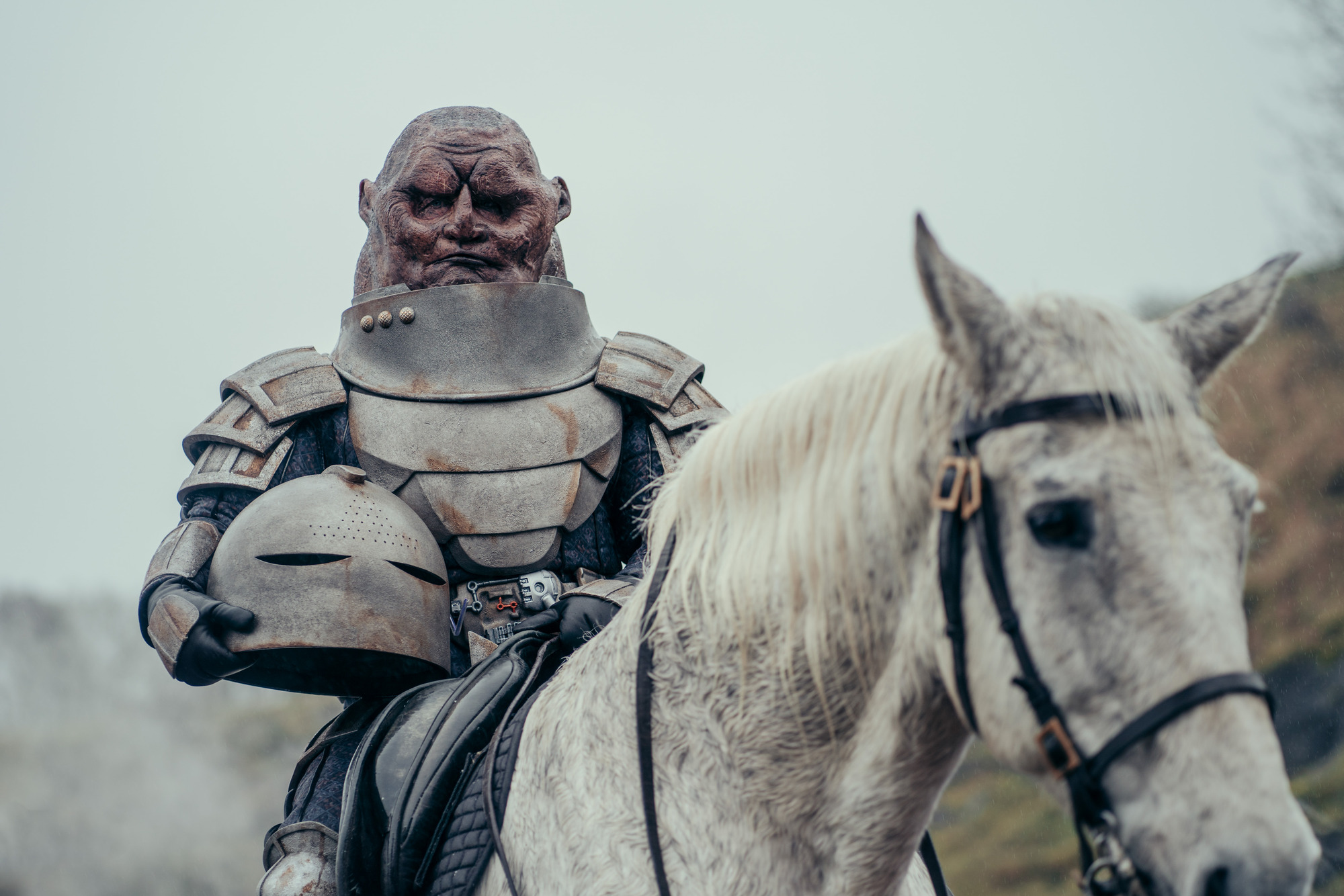 A shoe, a mallet and a squash ball. All weapons used in the world of Doctor Who to disable the martial might of a Sontaran soldier. It’s the little hole on the back of their neck known as the probic vent, see. Makes them vulnerable. Give an exposed probic vent one good whack and those stumpy, grumpy fellas fold like deckchairs. The finest soldiers in the galaxy – as Ten describes them in ‘The Sontaran Stratagem’ – defeated by items that could be readily sourced from any branch of Go Outdoors.

That’s assuming an opponent is able to sneak up to the back of a helmet-free Sontaran unnoticed, of course. It’s tricky but do-able if somebody else keeps them talking. Sontarans say they’re all action, but they love to talk. Their chief topics of conversation are the glory of the Sontaran Empire, the joy of battle, and the puniness of all other species whose defeat will inevitably come at their own three-fingered hands. Also, probably, how difficult it is to find shirt collars that fit.

Not that the loss of a single soldier would be any great pain to the Sontaran Empire. As lab-grown batch clones, you could kill one and minutes later, a hundred others would rise up in its place. That’s a massive part of what makes the Sontaran army’s reputation: it has scale. Their cloning techniques are so advanced that one million brand new clone soldiers can be produced in their hatcheries in roughly the time it takes to soft-boil an egg. It’s little wonder they rush headlong into battle at any opportunity; they have the numbers.

The Sontaran army can’t just afford a high body count, it actively aims for one. Their belligerence is legendary. To the Sontarans, war is the greatest outcome and death in battle the highest achievement. There’s no sense of self-preservation or staying out of unwinnable conflicts – for them, life’s only purpose is conflict. That’s why they’ve been battling the Rutans for over 50,000 years. Why stop when there’s a perfectly good war to be had? Sontar-Ha, Sontar-Ha!

That attitude explains why, when ‘The Halloween Apocalypse’ revealed The Flux – an atomising entity roaming the universe and destroying everything in its path, the Sontarans were thrilled. Every other species from human to Time Lord to Lupari met the coming of the cataclysm with panic and fear, but to the Sontarans, it was Christmas. (Imagine a Sontaran Christmas. Belligerence, bombast, territorial disputes… so, just normal Christmas really.) What a wondrous opportunity to make the streets run with the blood of their enemies and claim glory for the Sontaran Empire while everybody is distracted?

No, proud Sontarans don’t fear death; they welcome it with open, grenade-filled arms. It makes them a force to be reckoned with, as does their extreme technological advancement. No primitive warriors these. Achilles’ probic vent aside, they’re suited and booted for war, as are their nuclear blast-resistant ships. Their tech can zap, neutralise bullets, hypnotise… you name it, their skinny little wands and weaponry do it all.

Does that make the Sontarans the deadliest race in the Whoniverse? Not really, no. They may have volume, firepower and a passion for facing their enemy (literally facing them. They find it a special point of pride to fight ‘open-skinned’ without wearing helmets) but their code of honour would lose out every time to the relentless psychopathy of say, the Daleks. They talk a good talk, the Sontarans, but their desire for bravery and honour in combat is as much a weak spot as that little hole in the back of their sizeable necks.

Which brings us to the real reason that the Sontarans, though more than proficient in battle, aren’t truly deadly compared to Who’s other races: they’re not intended to be villains. They’re comical. Just look at their very first appearance in ‘The Time Warrior’. The helmet-shaped head gag, the silly little flag planted for the glory of the Empire… Sontarans are comedy colonialists, something Steven Moffat and Dan Starkey (a perennial presence under the Sontaran suit, currently playing Kragar) exploited to great effect with the Paternoster Gang’s nurse/butler Strax.

The finest soldiers in the galaxy? Sure, why not. The deadliest army? Nah. None of which truly matters of course, because it’s honestly less important to a Sontaran that they’re winning at war than that they’re at war. All the time! With everyone! For the glory of the Sontaran Empire! What were Commander Skorr’s last words as he was shot by the UNIT commander in ‘The Sontaran Stratagem’? “Wonderful!” Victory is beside the point. The battle’s the thing.

Doctor Who: Flux ‘War of the Sontarans’ airs on Sunday the 7th of November on BBC One, BBC iPlayer and BBC America.