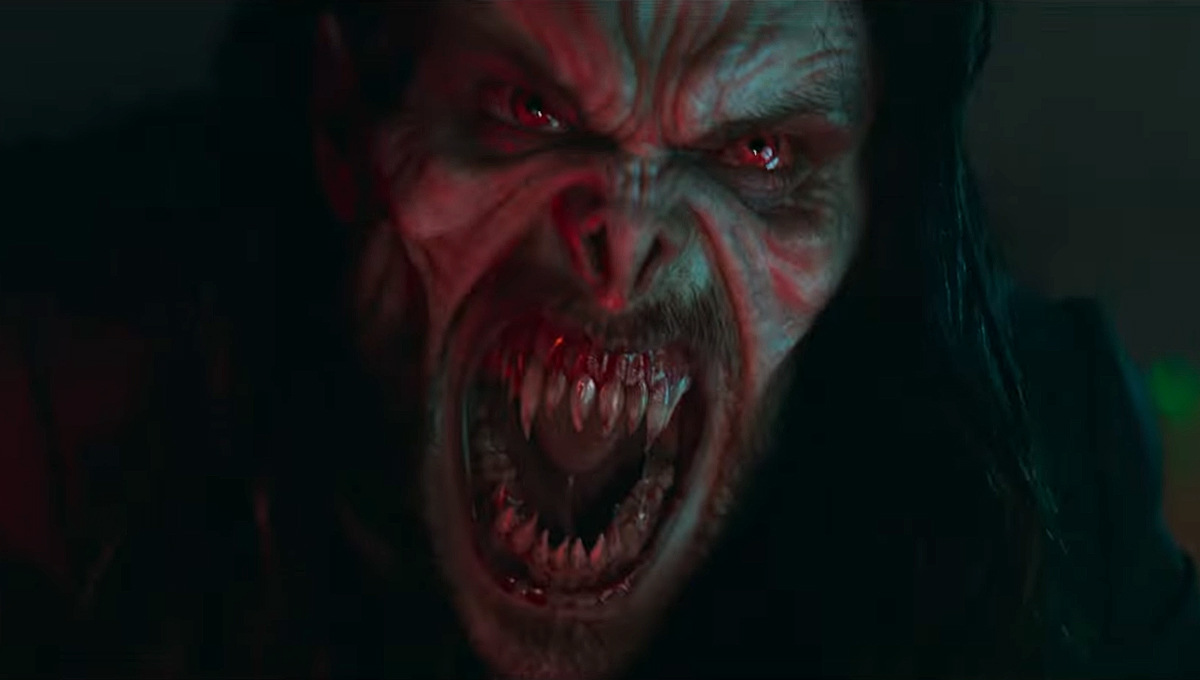 As multiverse movie mania surges from the trailer for December’s Spider-Man: No Way Home, the post-credits scene of Venom: Let There Be Carnage and mid-2022’s plot-obscured Doctor Strange and the Multiverse of Madness, it might be easy to forget the existence of Marvel movie Morbius. After all, the film, in which Jared Leto stars as Marvel’s antihero “Living Vampire,” teased its first trailer way back in January 2020—a time now considered a different era for many reasons. However, a new trailer not only reminds the world that Morbius is coming, but even further contributes to the multiverse mystery.

We’ll go through these references, starting with the latest. But first check out the new Morbius trailer just below.

The strongest new elements revealed in the trailer now link Morbius with Sony’s existing duo of Venom movies in multiple ways—some more subtly than others. Most notably, Venom: Let There Be Carnage’s pesky print newspaper version of signature Spider-Man lore newspaper The Daily Bugle has once again peaked its header here. Of course, we first saw this version of the publication in that entry, in which it was read by Detective Mulligan (Stephen Graham), seemingly indicating a strong Spider-man connection. However, it was a deceptively-layered reference, since the crucial mid-credits scene of 2019’s Spider-Man: Far from Home already revealed J.K. Simmons’s rebooted version of Spider-Man-maligning publisher J. Jonah Jameson, whose own version of The Daily Bugle is a kooky conspiracy website, rather than a traditional print paper.

Thus, the newspaper version of the Bugle was unique to the Venom movie timeline—at least, it was before the new Morbius trailer. In this instance, the Bugle, bearing the headline, “Dr. Michael Morbius Apprehended for ‘Vampire Murder,’” is a device used to convey an idea that was already hinted in the previous trailer, specifically that the disease-cured, but newly-vampiric Morbius will find himself in an involuntary custodial situation with the authorities over his (literally) bloodthirsty exploits. However, the paper Bugle clearly confirms that Morbius takes place in the same timeline as Venom; a notion made even clearer when Agent Rodriguez (Al Madrigal) says, presumably at the scene of a Morbius-related incident, “We haven’t had anything this good since that thing in San Francisco,” which is an obvious setting nod to the events of Venom.

However, the film’s most vexing of Venom links was saved for last. As Morbius is using his enhanced strength to interrogate a man who’s apparently forging bills, he is posed with an iconic question familiar to the comic book movie genre of “Who are you?” Yet, rather than providing the traditional answer of “I’m Batman,” Morbius (as played by former onscreen Joker Leto) instead answers “I’m Venom.” Indeed, with the film’s shared-universe status with Venom now established, the idea of him answering in that way might just be a tongue-in-cheek moment that’s flying too close to the proverbial meta sun.

This element is nowhere near as meaty as the Venom references, but it’s still rather clear. As the trailer transitions between its showcased scenes, we catch a glimpse of a fictional New York City skyline that potently includes one particular skyscraper, Oscorp Tower, specifically brandishing a logo that’s straight out of Sony’s Andrew Garfield-starring duo of The Amazing Spider-Man films. Thusly, the film could be indicating the continuity’s presence of the Osborn family, the patriarch of which, Norman Osborn, happens to be Spidey’s archnemesis, the Green Goblin.

However, before we get too far ahead of ourselves, all we really know for certain is that this Oscorp is a version of the building and eponymous conglomerate. Therefore, its presence doesn’t necessarily confirm that Morbius—and, by proxy, Venom—takes place in The Amazing Spider-Man timeline, although that might be left open to interpretation. What we do know is that Sony has long chased a spinoff megamovie centered on Spider-Man rogues gallery The Sinister Six, for which that version of Oscorp—as teased at the end of 2014’s The Amazing Spider-Man 2—was set to be the tech-supplying home base. While those teased plans never came to fruition, Sony still has its eye on that particular megamovie ball, which makes the Oscorp Easter egg even more intriguing.

The Morbius connections we already knew.

Of course, the touted 2020 teaser trailer for Morbius provided what was, at the time, one of the biggest eye-opening timeline-establishing moments yet, with a surprise appearance of Michael Keaton, who is reprising his antagonist role from 2017’s Spider-Man: Homecoming as Adrian Toomes/The Vulture. While this remains a strong element that links Morbius to the MCU-adherent Homecoming Trilogy, the nature of that connectivity has been somewhat muddled by what the new trailer is touting. Yet, we do get a bit of new footage of Keaton’s Toomes, who, akin to the previous clip, remains a convict in the aftermath of his Homecoming misdeeds, saying to a passing Morbius, “Hey, Dr. Mike, you and I should stay in touch.” The line, brief as it was, further hints Sony’s long-kept, ever-evolving Sinister Six designs.

Additionally, the trailer repeats another profound Easter egg moment from the 2020 teaser, in which Leto’s Morbius walks in a back alley—covering up his orange prison garb with a blanket—when he happens to pass by a poster of Spider-Man that’s covered with the graffito of “murderer,” which seemingly references the crucial mid-credits events of 2019’s Spider-Man: Far from Home, in which Peter Parker’s existence as Spider-Man is doxed, leaving him framed for the murder of Mysterio, who has posthumously concocted the life-hacking hoax through “TheDailyBugle.net” publisher J. Jonah Jameson. However, the Spider-Man costume in the poster image appears to be that of Tobey Maguire’s from director Sam Raimi’s 2002-2007 Spider-Man Trilogy, which profoundly confuses what was a seemingly simple visual Easter egg.

However, there could be a simple explanation for these seemingly contradictory timeline elements: the events of the upcoming Spider-Man: No Way Home. Of course, as the recent trailer makes abundantly clear, the film will see Tom Holland’s Peter Parker turn to Benedict Cumberbatch’s Doctor Strange for some supernatural help in his current legal predicament. This leads to some oddly-uncharacteristic carelessness on Strange’s part after a spell designed to make the world forget that Peter Parker is Spider-Man goes sideways, leading to the unraveling of the Multiverse. Indeed, the auspicious post-credits scene of Venom: Let There Be Carnage demonstrated how Strange’s spell will create a kind of new, amalgamated universe with elements from previous Spider-Man iterations. Thus, what we could be seeing here is a result of Strange’s botched spell, which, besides the confirmed presence of previous film villains, is believed to showcase the return of previous Spider-Men Tobey Maguire and Andrew Garfield.

The merged multiverse idea would be complemented by the fact that Morbius’s January release will immediately follow Spider-Man: No Way Home’s December drop date. However, it should be noted that Morbius endured one of the roughest series of pandemic-era date-shifts, and was originally set to arrive well before that film. Nevertheless, it does seem clear that Morbius is not going to become an isolated offering, and Leto’s Living Vampire role seems destined for further—directly Spider-Man-related—activities in films to come.