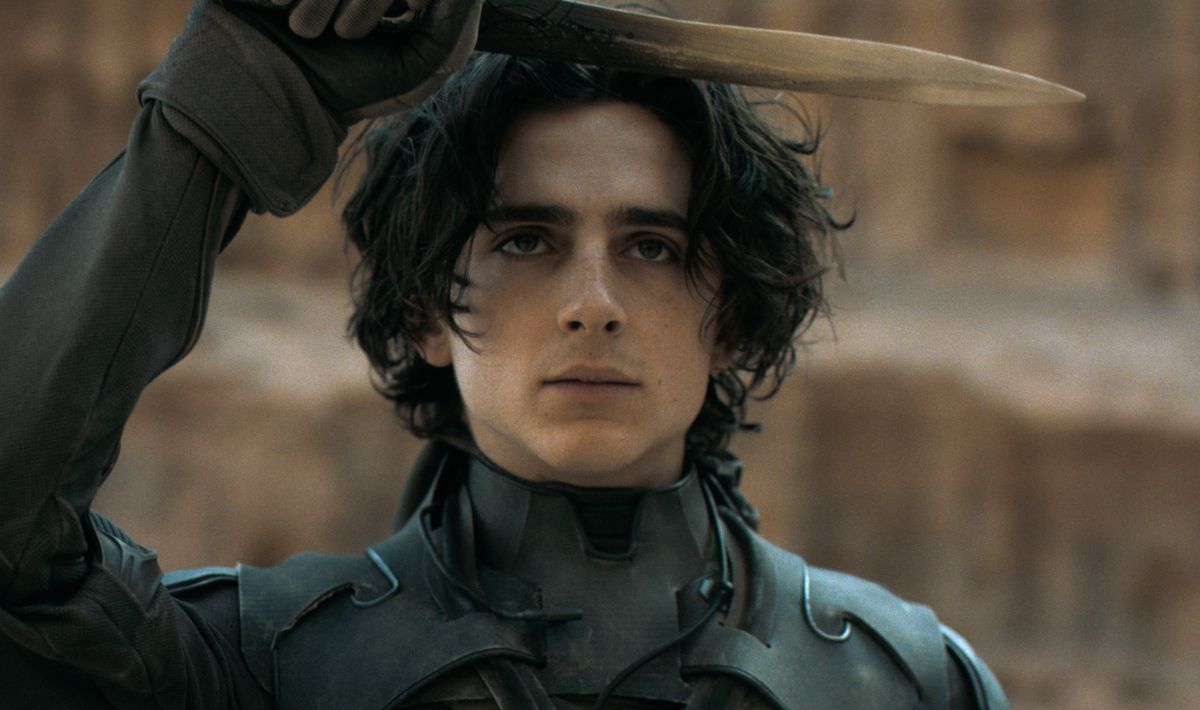 The spice must flow, and when it does it will look like movie theater popcorn. That appears to be the reasoning at Legendary Pictures and Warner Bros., with the former breaking the news on Twitter that Denis Villeneuve’s Dune: Part Two is officially greenlit and already has an October 2023 release date!

The news comes after Villeneuve’s first Dune picture (or “Dune: Part One” as the title card sneakily revealed in the finished film) became WB’s biggest opening weekend since the COVID-19 pandemic began, grossing $41 million in its first three days. That number, while obviously more muted than other recent blockbuster openings this month, was achieved despite the film also premiering day-and-date on HBO Max’s streaming service in North America. When coupled with the film already having grossed more than $220 million worldwide, Dune is a qualified success in the pandemic era, one which is apparently also serving HBO Max’s subscription model well.

So Villeneuve getting to finish his big screen version of Frank Herbert’s 1965 novel (which he broke in half for adaptation purposes) is not necessarily a surprise after this weekend. But Villeneuve also getting to do that with an exclusive theatrical window is, somewhat, since WarnerMedia has led the way in experimenting with day-and-date “hybrid releases.” Indeed, the studio made international headlines when it announced in partnership with Patty Jenkins and Gal Gadot that Wonder Woman 1984 would debut in theaters and on HBO Max during the height of the pandemic last December.

They then made even bigger ones when the studio revealed without consulting their talent and film partners that WB’s whole 2021 film slate, including Dune, would go the same way as WW84. Villeneuve famously attacked that decision in the press last year when he wrote an op-ed criticizing the choice in Variety. While WB didn’t back down, Villeneuve also never stopped criticizing the move, even as he promoted Dune this year. And yet, both parties seem thrilled today to confirm that Dune: Part Two is on its way and will be here in two years.

“I just received news from Legendary that we are officially moving forward with Dune: Part Two,” Villeneuve wrote. “It was a dream of mine to adapt Frank Herbert’s Dune and I have the fans, the cast and crew, Legendary and Warner Bros. to thank for supporting this dream. This is only the beginning.”

Of course the question becomes why did Warners agree to give Dune: Part Two the exclusive theatrical window that Villeneuve craved for Part One but was denied? Well, beyond the surface level assumption that they’re anticipating the COVID pandemic will be much better managed (or somehow gone) in two years, there is the probability they needed to make this concession to keep Villeneuve onboard. The filmmaker just delivered their biggest hit on the HBO Max/theatrical model, and now he suddenly looks like a major contender at this year’s Oscars. If he were to walk away from Part Two after this it would be a bad look, particularly following Christopher Nolan’s infamous snubbing of WB on Oppenheimer after the WB/HBO Max announcement.

What is likely more influential, however, is that studios are seeing the limits of streaming models, at least at this point in time. When WB announced that their 2021 film slate was going to be a day-and-date experiment, the world was in a different place without a widely available vaccine. But there had also been long simmering speculation and expectations that studios were destined to dabble more aggressively in hybrid models and even possibly cut out cinema exhibitors all together in favor of a direct-to-consumer approach, as favored by Netflix.

WB was the first to put major 2021 blockbusters on streaming, but Disney soon followed suit with Cruella, Jungle Cruise, and Black Widow—all behind a luxuriant $30 paywall on top of their monthly subscription fees. But despite heavy hitters like that, or WB’s own The Suicide Squad and Godzilla vs. Kong, only Marvel Studios’ Black Widow was able to gross over $35 million in its opening weekend. Until Dune, WB hadn’t topped the $31.6 million earned by Godzilla vs. Kong’s opening way back in March, which due to its timing in the early days of the vaccine rollout was viewed as a relative success then.

Conversely, Black Widow’s $80 million opening—which Disney trumpeted was complemented by a $60 million gross in the same time period on Disney+’s Premier Access—was followed up by a stunning 67.8 percent stumble in its second weekend at the box office. This was unheard of for a Marvel release and was likely due not only to families staying home and watching it on Disney+, but also the instant availability the film had on piracy sites as a result of the day-and-date strategy. Scarlett Johansson certainly thought so.

Rather than announcing the viability of day-and-date strategies for blockbusters, WB and Disney’s experiments in hybrid releases showed the harsh ceiling on them. This became more apparent when movies like Shang-Chi and Venom: Let There Be Carnage overperformed in their opening weekends as exclusive theatrical releases.

WarnerMedia was insistent on the day-and-date hybrid model for much of this year, and continued to squash any rumors that they’d walk back the choice with Dune, which were likely borne from Villeneuve’s very public resentment of the decision to put the film on streaming the same day it opened in theaters. And yet, the studio is now the one bowing to a different type of pressure; the kind which reveals the theatrical release model is still the best one for opening at least major four-quadrant blockbusters targeting a global audience. Hence the decision about Dune: Part Two.

All of which hopefully paves the way for Villeneuve to finish his envisioned Dune trilogy. That trifecta would include an adaptation of Herbert’s first sequel novel, Dune Messiah, which was published in 1969.

Dune star Timothée Chalamet agreed, saying he thought Dune Messiah “was amazing, and, in some ways, more traditional than the first book. I’d love to do it when and if we—hopefully—get to it.”

Dune is in theaters now.

Link Tank: Avengers: Infinity War vs. Avengers: Endgame – Vote for the Best MCU Movie
The Gilded Age Episodes 1 & 2 Review: Never the New
The Gilded Age Isn’t a Downton Abbey Prequel (But May As Well Be)
Attack on Titan Season 4 Episode 19 Review: Two Brothers
The Power Rangers Episodes That Will Make You a Fan