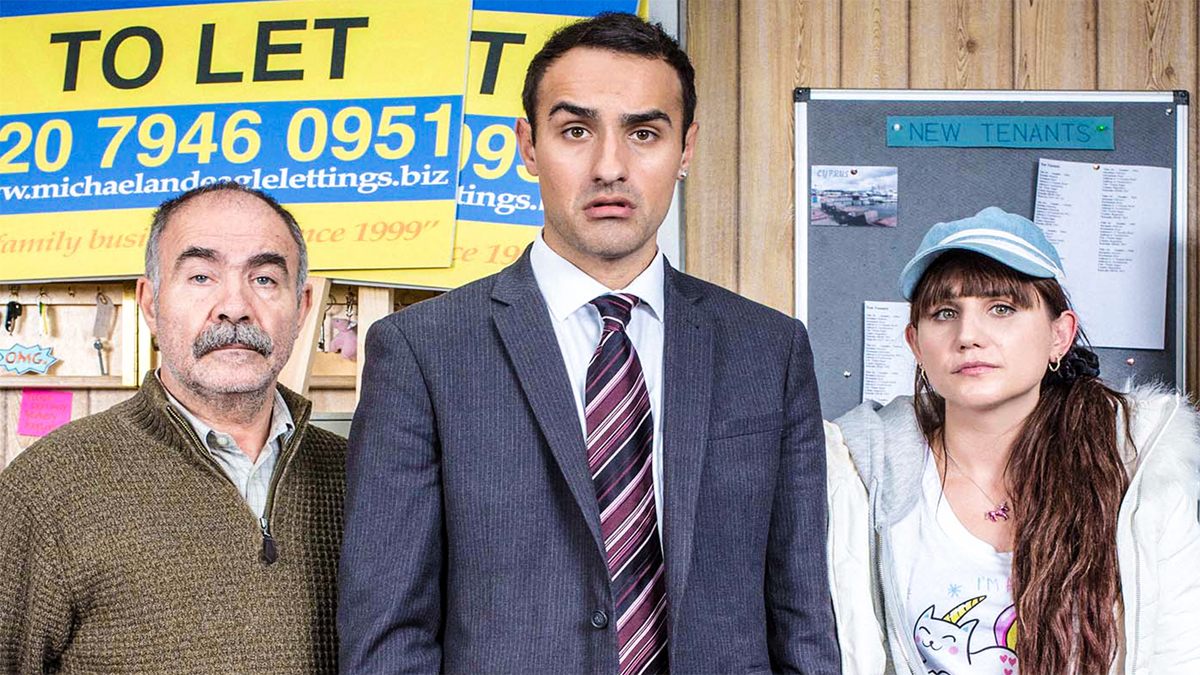 As you’ll know if you haven’t set your Netflix account to stop autoplaying previews, a lot of comedy writing isn’t really comedy writing at all, but writing in the shape of comedy. There are rhythmic set-ups and punch lines and pauses for laughter, but what’s being said is… words. There’s every appearance of a joke, but nothing inside, just a vacuum where a joke might go. It’s the TV equivalent of void-fill foam starch packing peanuts; technically edible but with zero nutritional value.

And then there’s Stath Lets Flats, a comedy so rich in nutrients you could live off it for well over a year. Which fans have had to, because the brilliant second series which won all the awards Bafta could give it, aired all the way back in summer 2019. Series three arrives today, after a delay due to the pandemic and the packed schedules of its increasingly in-demand cast.

That cast includes creator Jamie Demetriou, who plays inept Greek-Cypriot lettings agent Stath; Natasia Demetriou, who plays his dopey would-be singer sister Sophie; Katy Wix as career-minded Carole, who’s what would happen if you put all of the female contestants on The Apprentice into a blender and froze the results into a human-shaped ice lolly; Kiell Smith-Bynoe as the perpetually exasperated Dean; Ellie White as bad girl Eastern European lady postman Katia; and Al Roberts as Al, a man so self-effacing that if you ran him over, he’d apologise for denting your car. There are many, many more, including new series three guest stars Julia Davis and Charlie Cooper, who each bring their own specific oddness to play.

Specificity is what makes Stath Lets Flats a delight. It’s a workplace comedy with a singular vision and tone. There’s nothing bland or cookie-cutter about its characters or performances, none of whom we’ve quite encountered before. In Stath, there may be a little of David Brent’s awkward attempts to be a smooth operator, a little of Frank Spencer’s childlike ineptitude, a little of Basil Fawlty’s explosive rage or even Manuel’s utter cluelessness… but he’s his own thing, an inimitable creation.

Inimitable is right, because Stath impressions are devilishly hard to do. It’s not just the delivery but the confounding dialogue which speaks to what must be an obsessive level of attention to detail from writer Demetriou. Stath doesn’t just get English wrong, he speaks in a wild, vertiginous style that suggests his brain is always two steps behind his mouth, which itself is three steps behind anybody else in a conversation. Stath speaks like a man juggling, but who doesn’t know what juggling is. He’s desperate to say the kinds of things that cool Americans say in cool American films and cool American R&B songs, but is bewildered by words and by imagination. He has far too many of the former, and none of the latter which makes him in awe of anybody who does.

Stath’s hero-worship of the most mundane characters (Al, Sophie) is one of Stath Lets Flats’ many inversions of the received sitcom voice. So much comedy writing involves characters making waspish swipes and exchanging ‘witty’ put-downs that get oohs from the audience but are ignored by other characters in-world. In Stath Lets Flats, nobody speaks in urbane puns or witticisms, but the merest attempt at a joke is met by an uproarious reception. What’s really funny isn’t how sparkling the dialogue is, but how earnest the characters are. When Al tells Sophie that her “contribution to the arts in the UK could be so huge,” it’s hilarious because he means it, and well, we’ve all heard Sophie’s songs. Stath’s honest belief that unassuming Al is the top man in London whose every word is conversational gold is an endearing character trait and another stroke of genius from the show (there are 34 strokes of genius in total, from Carole’s milk-based diet to Al’s fluency in Japanese. See diagram below for details).

Endearing character traits for Stath were in short supply in series one, something rectified in the second run which offered more of the character’s clueless vulnerability than clueless aggression. Series two also developed the love story between Sophie and Al, two characters that anyone would be desperate to see together (the sex, the babies, the supermarket shop, I want to see it all). The second run also ended with a dramatic event that shows Stath Lets Flats breaking even further out of the traditional sitcom mould, presaging excellent things for series three.

With carefully pitched performances, extremely detailed writing, and an unerring devotion to what’s actually funny as opposed to what sounds like it’s funny, Stath Lets Flats is everything that empty, packing peanut sitcoms aren’t: novel, surprising, unique and quite obviously a labour of love. A absolutely comedy.

Stath Lets Flats series 3 starts on Channel 4 on Tuesday the 26th of October at 10.15pm. All episodes will be available to stream on All4 after broadcast.