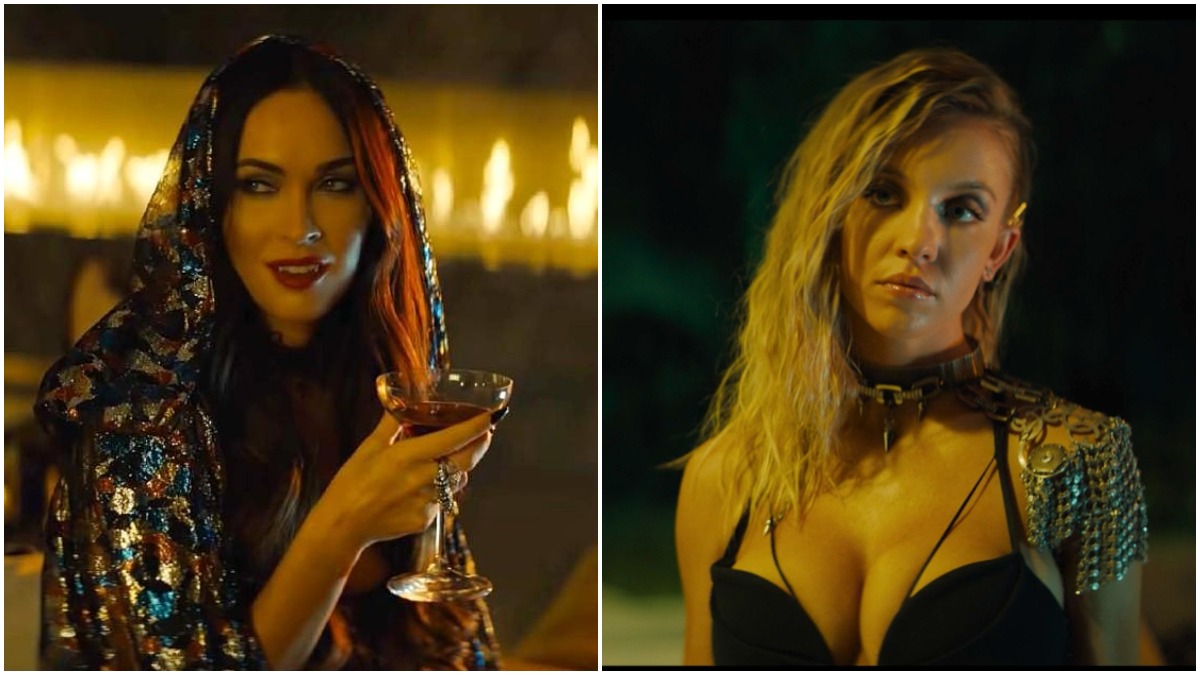 Netflix’s Night Teeth stars Lucy Fry and Debby Ryan as Zoe and Blaire, two vampire enforcers in a battle over the vampire underground in Los Angeles. They work for Victor, played by Game of Thrones’ Alfie Allen, who set the stage for a changing of the guard in one nocturnal mission. A formidable trio, yes, but Megan Fox and Sydney Sweeney pull the real coup in the film. Their vampire queens Grace and Eva only get one scene and make off with the movie. So perhaps Fox and Sweeney should bare their fangs in a feature they can sink their teeth into.

If you are making a vampire movie, and you have Megan Fox in it, she should be the centerpiece, right? She exerts an otherworldly aura, which has worked against her as directors don’t think of her beyond a certain skill set. She is far more than Jennifer’s Body, and the typecasting has made her stronger.

Fox basically carried Bruce Willis from chair to chair in the film Midnight in the Switchgrass, and can certainly carry a vampire film. Fry is a strong lead, too. Her Zoe is so cantankerous and jaded in Night Teeth that she is irresistibly lovable, and Fry’s interpretation adds depth on the run. Fox, however, is a force of nature. She’s given psychic readings on live TV. She may be a vampire for all we know.

Night Teeth is aimed at a younger audience, and follows the strictures of mainstream vampire formula. It fills every expectation of the genre in exactly the timing that general audiences respond to. This means evil characters have to die. It doesn’t matter if you like them; monsters must be dispatched by the end of the movie. They may come back a few times, but unless there’s a franchise planned, evildoers go down. Especially in the post-superhero landscape where truth, justice, and “a Better Tomorrow” allows anyone to mount a crusade in a mask, antlers, or a cape.

But they are not going to rock that cape like Megan Fox does, and some lucky filmmaker should drape her as a super-antihero, and let her get away with all the vile deeds creatures like vampires are punished for indulging. Vampires do not need to be killed at the end of every movie, and they certainly are not looking for redemption. Save that for Blaire and Benny (Jorge Lendeborg, Jr.), who follow the immortal romantic vampire trail headlong into the sunset.

Fox and Sweeney’s Grace and Eva are Victor’s bosses. When Victor breaks the truce by killing a human in a safe zone, they get to decide whether he dies or lives in banishment. Victor’s proposal is a sound one. Take away the protection, and the entire city is an open neck.

Sipping on a blood martini, with crimson lips, long, black nails, and a bejeweled and hooded cape, Fox’s Grace admits she is equally frustrated. “Do you think that when my pool boy leaves a leaf in the pool, that I don’t want to string him upside down and suck him dry?” she admits, illuminated by a fireplace burning deep red. I’d like to see a movie which would let her, and allow her to live on to do it again.

The vampire protectors of the human world are only protecting humans out of convenience. Anti-vampire vigilantes like Benny’s brother Jay (Raul Castillo) won’t come knocking, and the local cops ensure the blood exchanges go smoothly, and consensually.  As the overseers, Grace and Eva are deliciously, offhandedly cruel. Every sentence carries a bite. They are insolent, jaded immortals who like the status quo because they control it.

I admit, I always root for the villain, monster, mobster, or poisonous lobster in genre films. I have since I was a kid. They speak to me. But in this film, the most antagonistic vampires are the best characters. Alexander Ludwig’s Rocko is a breath of stale fetid air. Victor offers a vampire hunter a bite of his own niece. Megan Fox and Sydney Sweeney play greedy, narcissistic, bored and cynical majesties, entitled by blood. They are vampire queens and should be given their reign. Fox certainly earned her place as horror royalty.

The best way to do this would be a prequel. Then we would also get to see the underworld of vampire crime families in detail. What kinds of mob bosses are Grace and Eva? How did they get power, how do they hold on to it, and what other powers do they have? The vampires in Night Teeth only show superspeed and strength. We get very little evidence of some of the more supernatural gifts vampires are traditionally endowed with. Fox’s Grace may very well have maintained territorial control through vampire mind control. She can certainly pull it off in a believable way.

Sydney Sweeney also deserves a co-starring role in a vampire film just on the merits of the title of her 2018 film Everything Sucks!, but she is also obsessively watchable in The Voyeurs, and blissful in Euphoria. She was also quite good in HBO’s breakout hit, The White Lotus.

She and Fox enjoy a natural and caustic chemistry. They both have that “been there, done that” attitude down, and appreciate the minor annoyances of the other. Grace transforms the uppity Victor into a wormy Theon Greyjoy by merely dismissing him as “tacky.”

A prequel could also fill in the backstory of Zoe and Blaire. Fry and Ryan work very well off each other, and convey the long friendship they’ve enjoyed. Seeing how Zoe and Blaire first connected could be an equally compelling subject. They both excel as group players, and the core acting talent of Night Teeth make an excellent troupe. Rocko’s backstory would make a great subplot. But it needs Grace and Eva front and center. That’s where the magic is.

The Matrix Resurrections Reveals New Take on Hugo Weaving’s Agent Smith
Peacemaker | Official Trailer | HBO Max
Across the Spider-Verse: Who is Spider-Man 2099 and How Does He Fit In?
Hulu New Releases: December 2021
No Time to Die Is the Best You Only Live Twice Adaptation