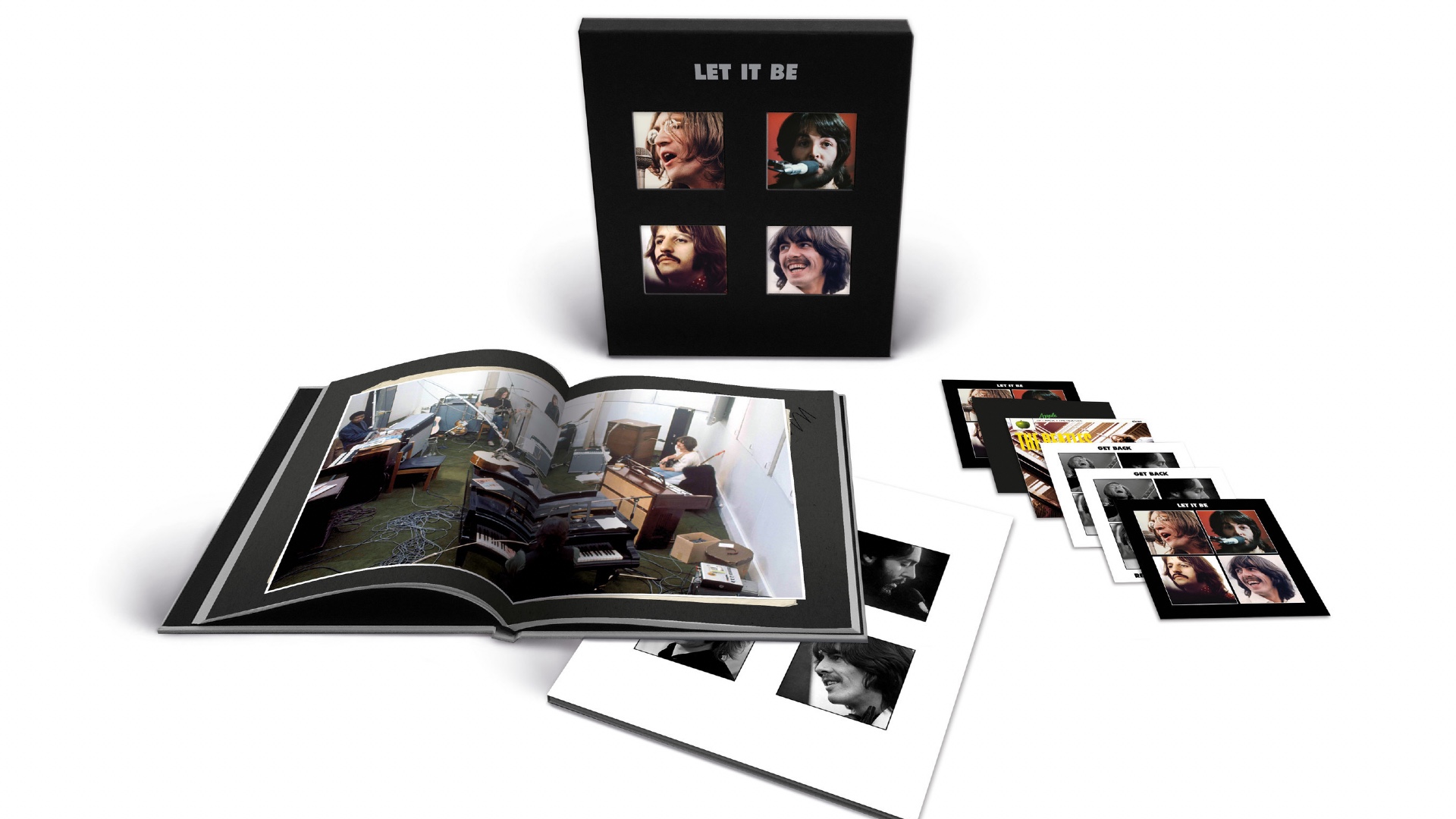 The new trailer for Disney+ original docuseries The Beatles: Get Back promises “the most intimate and honest glimpse into the creative process and relationship between John Lennon, Paul McCartney, George Harrison, and Ringo Starr ever filmed.” From the first looks at all the accoutrements which come along with it, one thing is apparent: Peter Jackson knows The Beatles’ cinematic roots. The musicians’ onscreen personas were primed to be their generation’s Marx Brothers. They drop one-liners, social commentary, and physical comedy. Ringo even drops his pants in the lab of a mad scientist, which Groucho says is the first rule of comedy, if all else fails.

The three-part documentary series is supposed to chronicle what has come to be known as the sad end of the longest cocktail party, and if the trailer and companion book are any indication, The Hobbit director makes it all look like the band’s films. A Hard Day’s Night, Help!, Magical Mystery Tour, and Yellow Submarine were all comedies. Let It Be was the only drama, and even it had its light moments.

Jackson proves the Beatles didn’t need Richard Lester to make them funny. Michael Lindsay-Hogg, who directed Let It Be, was not a comedy director. His works were straightforward documentations of the songs or performances he filmed. Lindsay-Hogg started on the British pop series Ready Steady Go!, which got him hired to direct musical promo films like the Beatles’ “Paperback Writer,” “Rain,” “Hey Jude,” and “Revolution,” and the Rolling Stones’ “2000 Light Years from Home,” “Jumpin’ Jack Flash,” and “Child of the Moon.” By the time he was brought on board for the Beatles’ still-vague visual project, he’d also directed the full-length performance movie The Rolling Stones Rock and Roll Circus. Lindsay-Hogg may have been brilliant enough to capture the rooftop concert in January 1969, but humor was not his forte.

You can see The Beatles: Get Back trailer here:

One of the supplemental releases to herald the documentary event is the first official Beatles book since The Beatles Anthology in 2000. Apple Corps’ 240-page hardcover standalone companion book The Beatles: Get Back transcribes the conversations which will go into the documentary. Between the book and the most recent trailer released from Disney+, it is obvious that Jackson found the funny. We will also feel the friction in the band which Lindsay-Hoog captured when he thought he was recording the band rehearse music for a TV special. But Jackson’s structure recalls a mop top madcap movie history. If he could make cannibalism funny, as Jackson did in Bad Taste, he can spin what Lennon called “the shittiest load of badly recorded shit with a lousy feeling to it ever” into an amusing shade of gold.

You can see the promo for the book here:

Jackson structures the almost 60 hours of raw footage into a race-against-the-clock story. This was basically the same premise as the first two Beatles films. They had to get Ringo into a TV studio in time for a live performance in A Hard Day’s Night, and they had to meet record company demands while running from a Kali cult with a finger fetish in Help!. Both films had great comic leads, and promoted group unity. “We’re a community, majority vote, up the workers and all that stuff,” McCartney declares in A Hard Day’s Night. “Let’s go back and get ‘em, eh,” Lennon rallies the group in Help!. “I think I burnt me finger,” Harrison realizes in Yellow Submarine.

“The best bit of us always has been, and always will be, when our backs against the wall,” McCartney enthuses in the trailer for The Beatles: Get Back before asking how many songs the band has ready. “None,” Lennon deadpans.

When McCartney proposes his song “I’ve Got a Feeling,” Lennon responds, “Well, I’ve got a hard-on,” before adding it to the mix, singing “Everybody had a hard-on.” To which McCartney adds “Except for me and my monkey.” For a bass player, Paul really knows how to cut the treacle. At one point John says their collaboration isn’t merely vocally harmonic, “It’s like you and me are lovers.” Before McCartney reminds him “I’ll be wearing my skirt on the show anyway.” When Harrison asks for a rhyme to fit a couplet in his song “Something,” Lennon throws out “Attracts me like a cauliflower.”

Like the best of melodies, a good story benefits from dissonance. The transcripts show how the film adds dramatic counterpoint. A frustrated Harrison quits the band, providing the tension of a slowhand cliffhanger, as Lennon says “If he doesn’t come back by Tuesday, we get Clapton.” Harrison comes back when the Beatles move sessions from the grim Twickenham Studios to Apple Studios. He brings along Billy Preston, and about a third of the songs which would wind up on All Things Must Pass.

The trailer also finally answers the question of what broke up the Beatles, and it’s what we’ve suspected all along. “They broke up ‘cos Yoko sat on an amp,” McCartney says. No word on whether he spills the beans on the “Paul is Dead” controversy.

Finally, the last companion to the film is 6-CD boxed set. The Let It Be reissue features a new stereo mix of the original “reproduced for disc” version by Phil Spector, which was done by producer Giles Martin and engineer Sam Okell. The album includes previously unreleased session recordings and demos. The remix is very clear, and evident from the opening song. You can really hear McCartney vibrate the string on the acoustic opening riff of “Two of Us.”

You can see the promo for The Beatles’ Let It Be Special Edition here:

The Super Deluxe collections also feature 27 previously unreleased session recordings, and a four-track Let It Be EP. It also includes the never-before-released 14-track Get Back stereo LP mix compiled by engineer Glyn Johns in May 1969. One of two early versions of the album which was rejected by the band before Lennon gave the tapes to Spector, it is a heavily bootlegged record. It includes McCartney’s “Teddy Boy,” which would show up on his McCartney album. The Johns release isn’t the same mix which came out as Let It Be… Naked in 2003.

The “Apple Sessions” disc includes alternate takes of songs, in-studio conversations like “I Don’t Know Why I’m Moaning,” covers like “Save the Last Dance for Me” and the Everly Brothers’ “Wake Up Little Susie,” and impromptu blasts of the past like “Please Please Me.” There are a few surprises, like “Can You Dig It,” which can almost be seen as a Beatle take on the Batman theme. But the high point is the “Get Back — Rehearsals and Apple Jams” disc, which presents early versions of songs which came out on Abbey Road, and on solo albums. Harrison’s “All Things Must Pass” gets full harmony treatments. We hear an embryonic version of Lennon’s “Gimme Some Truth,” which would come out on Imagine.

Viewers of Jackson’s The Beatles: Get Back will probably fall into two camps: is it a whitewashing of Beatle history or does it tip a balance. Both are correct, but they have to take into consideration the third option. It really is the film the band promised United Artists 51 years ago.