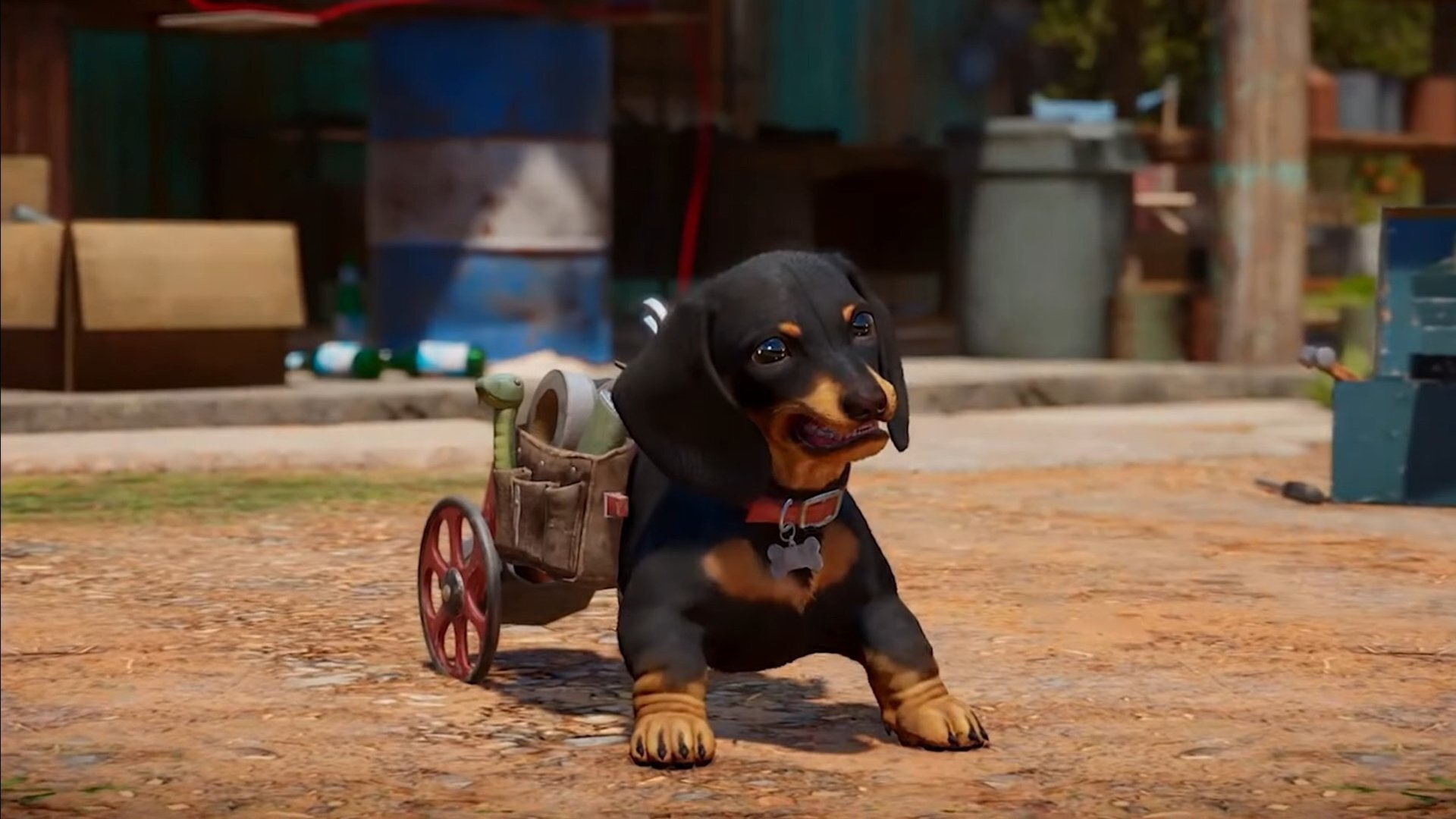 Far Cry 6 continues a recent series tradition by allowing you to recruit a variety of animal companions that are more than ready to fight by your side (this time, the animals are referred to as “Amigos”).

While it’s easy enough to play Far Cry 6 and find most of the available Amigos without going too far out of your way, a few of the game’s Amigos are shockingly difficult to find and unlock. Of course, we imagine that’s why you’re here.

With that in mind, let’s jump right into our look at where to find every Amigo in Far Cry 6 and what they have to offer (besides, of course, companionship).

Guapo is a real tank of an Amigo whose regenerative and defensive abilities make him one of the most effective combat companions in the game.

That’s why it’s so nice that you don’t really have to go out of your way to unlock Guapo. This crocodile will become your first available Amigo as soon as you complete the Juan Of A Kind mission. Despite likely being the first Amigo you’ll find (and the one you can’t miss), Guapo is honestly one of the best.

Cornered Beast: Guapo becomes more resistant to damage when his health is below 50% (have Guapo regenerate 3,000 Health in combat).

It’s hardly a surprise that everyone wants Chorizo to be their Far Cry 6 companion (just look at him), but you may be surprised to learn that Chorizo’s stealth-based abilities make him one of the most valuable overall companions in the game.

To unlock Chorizo, you’ll need to play through the main game until you reach the Meet The Monteros mission in the Madrugada region. That mission will introduce you to Chorizo, but you won’t unlock him as an Amigo quite yet.

To do that, you’ll need to unlock the Who’s A Good Boy? mission in that same region. That mission requires you to feed Chorizo some alligator meat, which you can thankfully find along the river in the southern area of Costa Del Mar. After that, you’ll need to complete another short Chorizo-specific mission that can be finished in the same area you meet Chorizo in.

Finishing that mission finally unlocks Chorizo as a companion.

Bloodhound: Chorizo will tag nearby resources with his sense of smell (have Chorizo distract 10 enemies).

Yes, You Can: Chorizo will regenerate some health when you pet him (have Chorizo tag 36 loot containers).

Keen Senses: Chorizo will occasionally dig some resources from the ground (use Chorizo’s healing ability 50 times).

While it may seem odd to bring a rooster with you in combat over a crocodile, Chicharrón is one of the more aggressive and capable combat Amigos in Far Cry 6. His flying abilities alone make him an asset.

To unlock Chicharrón, you’ll need to head to Patriotas Peak in El Este. There, you’ll find a quest called Man’s Best Enemy that should introduce you to Chicharrón.

Thankfully, you’ll then just need to complete the relatively brief three-quest chain that follows in order to unlock Chicharrón as a permanent ally. A couple of those missions will require you to battle large numbers of human and animal enemies, though, so be sure to come prepared, especially if you’re used to relying on stealth for other missions.

Roid Rage: Chicharrón attacks faster and deals double damage when his health is below 70% (have Chicharrón kill 12 enemies).

Angrier Bird: Chicharrón’s Angry Bird attack can knock enemies to the ground (kill 24 enemies while Chicharrón is in Roid Rage).

To find Boom Boom, you’ll need to go to the Valle de Oro region of the map. There, you will need to start the Boom Or Bust mission (you’ll find the prompt for the mission on a note pinned to a pole at the center of Camp Maximas).

The mission itself requires you to find the container that Boom Boom is locked in, which should prove to be pretty simple given that you can hear him barking from inside the right one. Once you’ve rescued Boom Boom, he’ll be your Amigo forever.

Pointer: Use Boom Boom to mark the location of enemy troops and animals (have Boom Boom collect resources from 10 dead bodies).

Oluso is a fascinating Amigo whose abilities combine the best of stealth and combat. He’s incredibly useful in pretty much every scenario and is certainly among the most powerful of the available Amigos.

He’s also quite difficult to unlock. To find Oluso, go to the Oluwa Cave on Isla Santuario and read the note found on the floor. From there, you’ll need to find the three treasures that have just been added to your map. The treasures themselves can be difficult to unlock, but since their general locations are pinned to your map, you should be able to use a little trial and error to procure them.

Return to the cave with the relics in your inventory, and you’ll be forced to do battle with some ghost-like animals. Following the battle, you should find Oluso laying on the ground. Revive the creature, and you’ve got a powerful new ally.

Mimo Abosi’s Luck: Oluso has a higher chance to succeed at stealthy takedowns during battle (have Oluso kill 12 enemies in a Restricted Area).

Rage Of Ida: Successful takedowns using Oluso will cause nearby enemies to flee (have Oluso kill 24 enemies using a takedown).

Mist Of Oku: Oluso is surrounded by smoke when below 50% health, and is immune to damage, hard to spot, and regenerates health faster (have Oluso inflict Fear on 50 enemies).

The good news is that K-9000 is an incredibly powerful companion whose metal exterior makes it immune to certain kinds of damage and resistant to just about every other kind of damage.

The bad news is that you can only unlock K-9000 if you purchased the Blood Dragon Set DLC for Far Cry 6. If you did, you’ll find K-9000 after reaching Libertad Island. If you didn’t purchase the DLC…well, it looks like you’re out of luck at this time.

Champagne’s stealth-like nature and ability to acquire additional Pesos from fallen enemies makes it an incredibly valuable ally, but unless you purchased the Vice Pack DLC for Far Cry 6, you won’t be able to unlock this feline friend.

Greed Is Good: Champagne succeeds more often at enemy takedowns the more Pesos you have (have Champagne kill 12 enemies)

Status Symbol: Champagne automatically loots enemies after killing them with a silent takedown (have Champagne kill 24 enemies using a takedown)

Sonic Snarl: When Champagne takes damage, chance to unleash a mighty roar to knock down nearby enemies and escape to safety (have Champagne loot 1,000 Pesos from dead enemies).

Who is the Best Amigo in Far Cry 6?

While the technical answer to this question is that each Amigo offers its own skills and benefits, there are some who certainly seem to be a bit more powerful than others.

While Oluso is the best combat Amigo by some distance, it’s also the most difficult Amigo to unlock. If you don’t feel like going through the unlock process, Chicharrón should work fine for similar purposes.

I’d say that Chorizo is probably the best stealth/resource gathering Amigo, but Champagne is certainly useful in that particular category assuming that you purchased the DLC required to unlock them.

Elden Ring Producer Reveals How Long It Takes to Beat the Game
Link Tank: Knives Out 2 is Coming Late 2022
The Magicians Season 3 Episode 7 Review & Reaction | AfterBuzz TV
10 Activision Blizzard Franchises Xbox Needs to Revive
Can The Mandalorian Save The Book of Boba Fett?