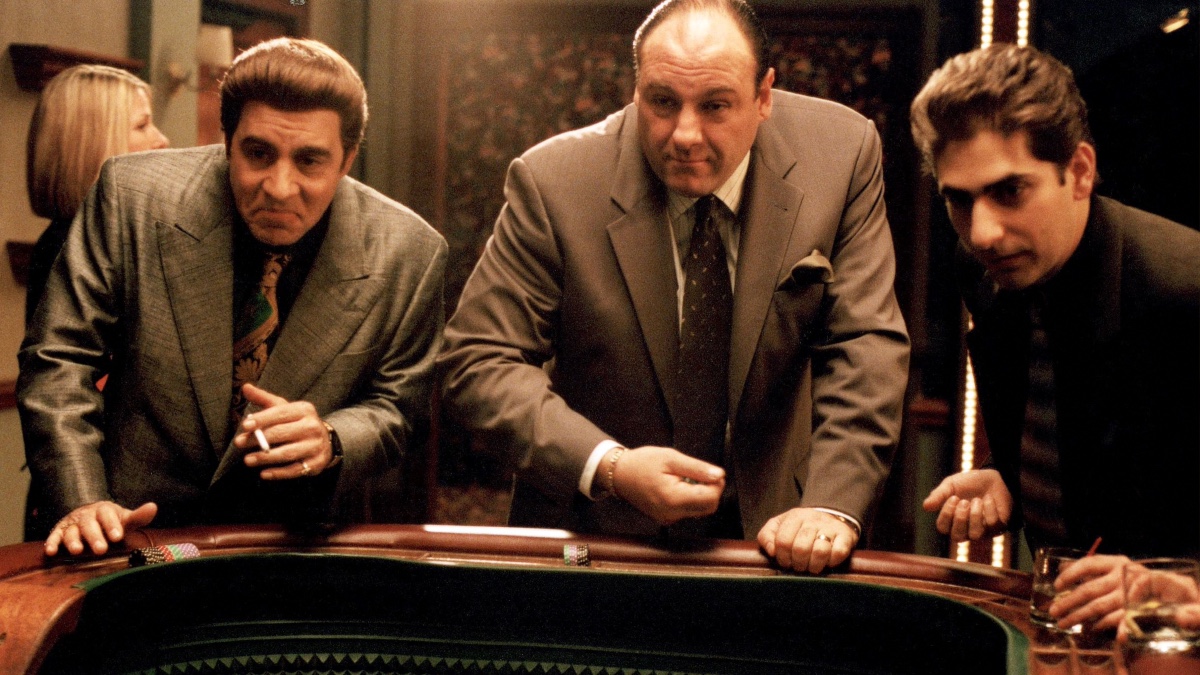 David Chase hates it when sloppy pop journalists tag The Many Saints of Newark as a “Tony Soprano (James Gandolfini) origin story.” This is a gangster movie about Dickie Moltisanti (Alessandro Nivola), the father of Christopher (Michael Imperioli) on The Sopranos. But we will get to see the first steps the future boss of the DiMeo family takes towards crime. We know young Tony (Michael Gandolfini) made his bones on the murder of Willy Overall on Labor Day of 1982, from the episode “Remember When,” but it’s doubtful the film will go that far in the timeline. That being said, it doesn’t mean Tony didn’t have to pop someone as a tax on past misdeeds.

There is no mention of the character Feech La Manna in the Many Saints of Newark IMDb page, but there are enough wise guys listed as characters to fill in the blanks. There is honor among thieves, at least when gambling, and the first thing the young punk Tony did which got him noticed was rob a room of criminals. Not just any game, either. It was run by one of the most respected standup guys in the Tri-State area, and parts of Sicily: Freech LaManna. He was so much of a legend he had to be played by a legend.

Robert Loggia is cinematic gangster royalty, and it goes way beyond telling Al Pacino not to get high on his own supply in Brian DePalma’s Scarface. He followed that one with the lesser-known mob masterpiece Prizzi’s Honor (1985), made by the iconic director John Huston. Loggia’s first film role was as street level mob associate Frankie Peppo in Somebody Up there Likes Me. That 1956 film, which starred Paul Newman as Rocky Graziano, was based on a book the middleweight boxing legend himself wrote, and was fairly accurate on street crime. Loggia personally was so tough, when Bill Maher said he thought Independence Day was stupid, on his old show Politically Incorrect, the actor convinced him to change his opinion. All it took were the words “what do you mean?”

Michele “Feech” La Manna was equally mythic. Tony says it himself. The old-school gangster was made in Italy, came to America in the 1950s, and settled in on the New Jersey side of the Hudson River. The DiMeo crime family was under the leadership of Ercoli “Eckley” DiMeo at the time. Feech ran gambling and bookmaking joints, and was in the same class, but in a slightly better league, as Giovanni “Johnny Boy” Soprano and Corrado “Junior” Soprano (Dominic Chianese). He also had a bakery and catering company on the side which did so well that Paulie “Walnuts” Gualtieri (Tony Sirico) calls him “The King of Breadsticks.” Feech quickly became a caporegime and had a fearsome reputation. But his real street cred came from his friendly Saturday night card game. It was a high-stakes, VIP event, and he ran it with style and humor, and was very hands on.

Jackie Sr. and Tony would have robbed Feech game’s sometime between 1978 and 1979. According to the myth, sticking up the venerated game proved Tony and Jackie had balls, and solidified their status as rising stars. By all rights, Feech could have had them killed. Jackie’s older brother, Richie Aprile (David Proval), was a good earner, and a high-ranking soldier in the family. He intervened on his brother and Tony’s behalf. Tony’s father and uncle were capos in the DiMeo family. Johnny Boy probably had to go into his own pocket to make things right with Feech.

The major takeaway of the card game stickup was that nobody died, and Feech was repaid at least some of his money. But the point had been made. These were street legends in the making. It doesn’t go the same way when Ralph Cifaretto (Joe Pantoliano) tells the story to the future generation of mob wannabes. Ralph thinks he never moved up the ranks because he wasn’t part of robbing La Manna’s card game. When Ralph tells Jackie Jr. (Jason Cerbone) and Dino about it, he makes it sound like such an easy entrance to mob life they try to make history repeat itself.

They target a card game run by Eugene Pontecorvo, a member of Ralph’s crew. They smoke crank before the stickup to get up the nerve, and go through with it even though Christopher and Furio Giunta (Federico Castelluccio) are at the table, and the card dealer, Sunshine, gives them a chance to get out before they get in trouble. Jackie kills Sunshine and shoots Furio in the leg. Christopher and Albert Barese kill Jackie Jr.’s small crew. Furio’s leg wound is treated by urologist Dr. Ira Fried.

It’s a hanging offense for Jackie Jr. Even though he is the son of a former boss. On behalf of Jackie Jr.’s mother, Ralphie asks for a pass for Jackie Jr. But he does have Vito Spatafore (Joseph R. Gannascoli) do the job on the kid. It might have come closer to that for Tony and Jackie than the word on the street. In season 2, episode 3, “Toodle-fucking-Oo,” Richie Aprile tells Tony: “I’m the guy who saved you from the hit parade.” He fills in the details. “Feech was a made man. If it wasn’t for me, you would’ve got a vicious beating, to say the least.”

The legend says Tony and Jackie were on a fast track to being made because of the robbery. It is possible the Willie Overall hit was part of the tax Freech put on the clemency. Aprile’s details might explain why Feech wasn’t so hot to take orders from Don Tony Soprano.

Feech was convicted of RICO in 1984, and sentenced to 20 years. When he gets out in 2004, La Manna returns to North Jersey to find the guy who robbed his gang is now the boss of the family he owes allegiance to. He wants to “get back in the game,” and that includes getting his card game back. Tony agrees, just so long as Feech doesn’t step on anybody’s toes. Feech swears he is a great dancer, and to be fair, nobody’s got moves like his. First, he trims the limbs from under the landscaper who pays Paulie for protection. Then he jacks every car parked for Dr. Fried’s daughter’s wedding, even after being told the doctor was not to be touched.

Tony had already gone through this when Richie got out of jail and pulled a power play. Feech La Manna is loosely based on Bonanno crime family capo Carmine Galante, who tried to overthrow Phillip Rastelli after getting out of prison. Tony nips it in the bud, sending Christopher and Benny Fazio over to Feech’s place with a garage full of hot plasma screen TVs. They are there when his parole officer comes by and Feech goes back to prison.

The Many Saints of Newark will be released in theaters on October 1, and will be available on HBO Max for 31 days from the theatrical release.