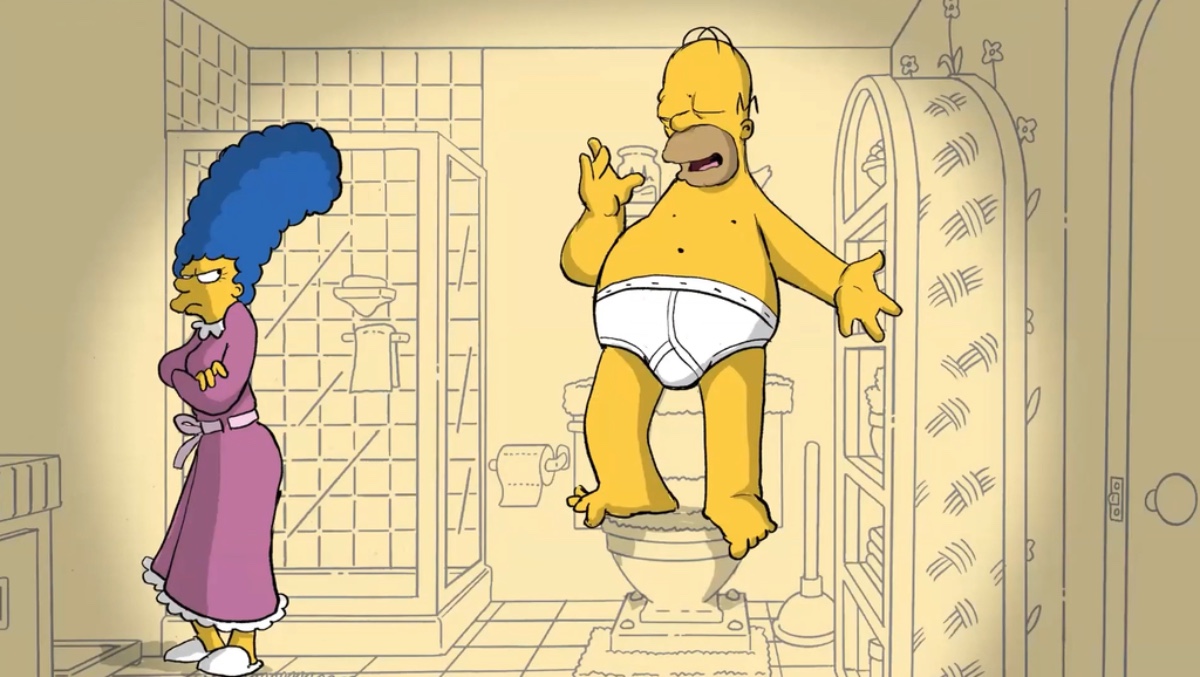 Why don’t we do the show right here, Mickey Rooney or Judy Garland might ask in a Hollywood Golden Age movie about barnstorming local theater. Sadly, The Simpsons’ “The Star of the Backstage” can’t go Rent-free. The techies, theater-geeks, and all the animators pull out almost all the stops for the season 33 premiere, but offer a mixed bag, even when it takes a Wicked turn.

The premise is great. It begins at the funeral for Springfield High School’s theater director Franklin Chase, and Marge wants to bring the whole gang back together for one last revival of their senior year production, only to find she was never really part of the group. The show is called “Y2K: The Millennium Bug,” and the opening ode to pre-millennial paranoia teases wonderful promise with lines like “How will I survive when all of the computers think I’ve died?”  This and the closing song, “5, 4, 3, 2, 1, 0 0 0,” with those ominous extra zeroes which couldn’t be accounted for on old motherboards, are truly worthy of The Simpsons tradition of comic musical offerings par excellence.

Marge has only happy memories of being the stage manager of her high school musical, even though she never considered herself a singer. The other gimmick of the episode is also functionally fabulous: in Marge’s mind, she has the voice of a Disney princess. Kristen Bell provides the magical inner singing voice only Marge and the viewers can hear. Bell’s enthusiasm is enough to get her into The Good Place or The Bad Place within any single run. She’s spot-on in her delivery, but the songs themselves are not quite over the top enough to deliver unexpected involuntary laughs.

The stage show is set on New Year’s Eve 1999 as the world waits to see if they will still be alive, or able to prove they’re alive, as the clock ticks to midnight. We don’t get enough of the songs from the play. The exposition songs are a little cringey, except for a few lines, like one about a Broadway star being a cut above the rest, sung by the high school cast’s lead. There are highlights. The cast gleefully confesses making the sad and untimely death of one of their inner circle all about themselves, which itself made The New York Times. Barney has a sad, almost show-stopping solo admitting he “could have been a crooner, a star of stage and screen, but he’d just as sooner drink away his dreams.” Why try? Homer’s song about breaking bad news gently to a wife who doesn’t want to hear it is also a standout. “Your reaction deserves a retraction,” is one of the most heartfelt lines sung in the entire evening.

The songs only have a dull gnaw, where Simpsons musical numbers in the past have occasionally bitten off more than they could chew. The musical interludes in either “A Streetcar Named Marge” or “Stop the Planet of the Apes I want to get off” prove this is well within their reach. And don’t get me started on what they did to Steve Guttenberg, I could never look at him the same way again.

This is what happens to the former high school ingénue turned Broadway star. Sasha Reed is voiced by Sara Chase (Unbreakable Kimmy Schmidt), who may be best known for playing all three mistresses in First Wives Club: The Musical, but who probably worked at the Herald Square Sephora like Sasha. At least she knows not to mention Glenn Close to Patti LuPone. The best visual gag of the evening comes at Moe’s bar. While Sasha is remembering her night in a hot tub with Barney, watch Moe, he is so enthralled he shatters the glass he is cleaning but keeps on wiping.

But Marge’s story is sad, and it makes me feel the same way Homer did after watching the way that Stanley Kowalski guy treated her in the Springfield theater production of A Streetcar Named Desire. The problem is it doesn’t ring emotionally true, in any canon. Marge is a wet blanket at slumber parties and a killjoy at the Krusty the Clown show, but her clique has always been several tiers above Homer’s. To have him and Barney in the more socially acceptable circle, albeit within the theater crowd, feels false and forced. Marge gave up her status to be with Homer, and if the two of them are losers, it shakes the dynamic.

We don’t want to see Marge left out of the best of the best of times. Although, it’s true, she’s not the type who’d go to a kegger, even at her own house, when there is a tech run-through scheduled or any night. But even Homer was at the party, even though he wasn’t in the show, and he still would not have been on that level of high school status.

There isn’t much for Bart and Lisa to do, except give the final critique at the end, which is oddly apropos. It feels lazy, they say. This isn’t exactly the case. While most of The Simpsons’ most classic musical moments are parodies of other songs, all of the songs in this episode are original songs written by Jack Dolgen and Elisabeth Kiernan. They are nothing if not ambitious, melodically and lyrically, but comically, they fall just short. They had such an opportunity and have the talent, means, and Marge as stage manager. We get drama, when Marge exposes Sasha for what she is. That hits the right tone, and is musically exciting. But it doesn’t have the subversive danger which The Simpsons excels at. It’s perfectly fine, and would be a memorable episode of any other sitcom, but it’s not “Monorail.”

All this being said, this is a great experiment which works enough to happen again. The musical numbers have been outshining much of the scripted gags in the past few seasons of The Simpsons, and this is an encouraging outgrowth of it. But, we need more than this. It feels like a retread of something they haven’t done before, when it should feel like a whole new experience. Maybe I expect too much, or am hoping that, at 33 seasons and counting, The Simpsons will recapture the magic Marge is looking for in this episode. 1999 was the last time we partied like it was 1999.

“The Star of the Backstage” has all the makings of a major leap forward but, like the Y2K Bug itself, it doesn’t capture the hype.