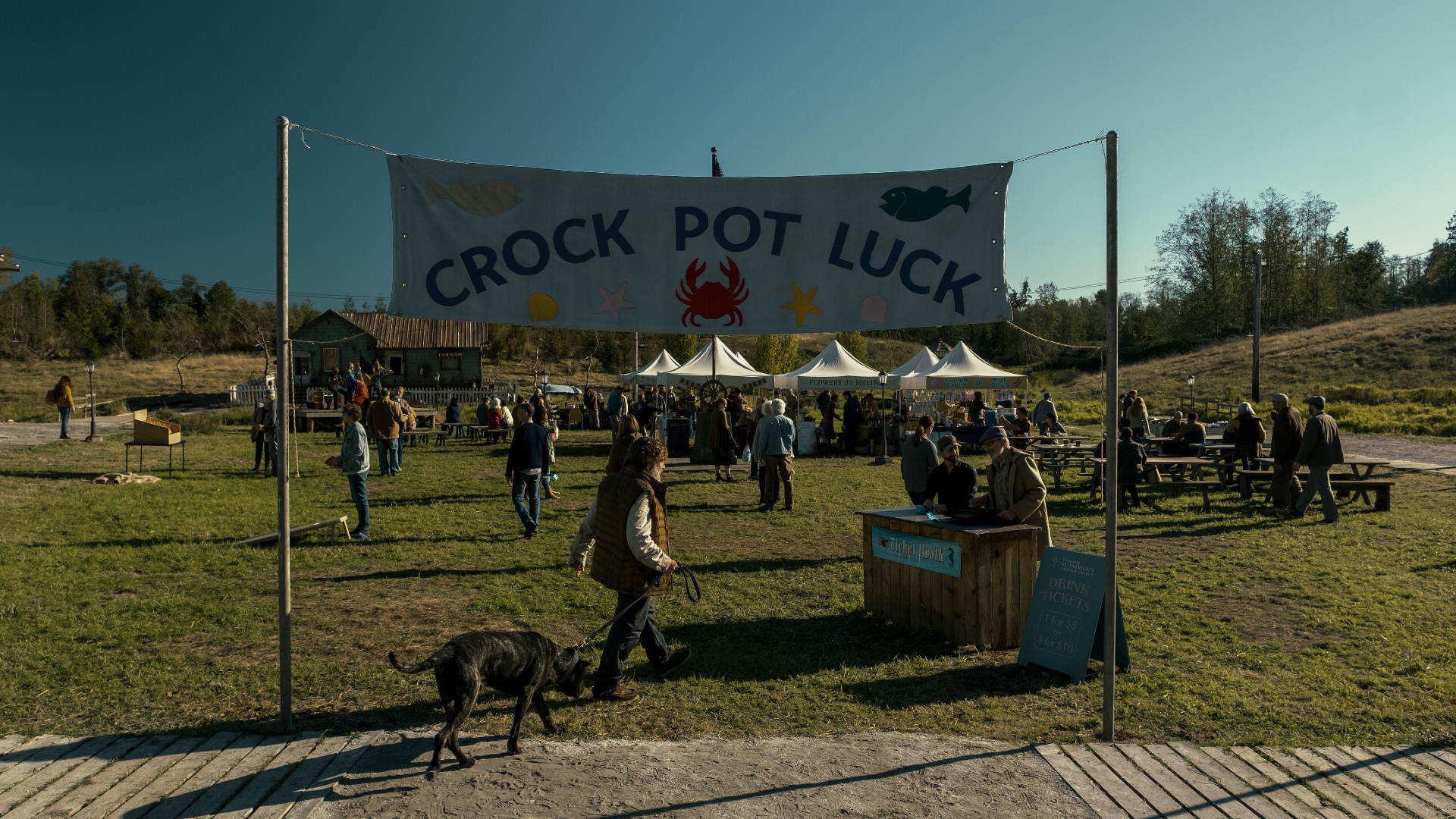 As far as vacation spots go, Crockett Island on Netflix’s Midnight Mass doesn’t seem to be a bad choice. The weather is chilly, but a nice cable-knit sweater will take care of that. There are also plenty of feral kitties to attempt to pet. Best of all, the community of 127 people knows how to throw a mean potluck…or “Crock Pot Luck” as they like to call it.

If it weren’t for the, you know … creature, Crockett Island would be a fun trip. So when can we all go visit it?

Crockett Island is sadly entirely fictional. Not only that but its filming location isn’t even an island. All shots in Midnight Mass that reveal a landmass surrounded by water are computer generated. Midnight Mass’s real filming location was in the Vancouver, British Columbia suburb of Richmond. Most of the outdoor locales that made up Crockett Island were in a small waterfront public space called Garry Point Park (right down the street from the yummy sounding Pajo’s Fish & Chips).

Due to favorable tax breaks, many TV shows and films set up shop in the Vancouver metropolitan area, including Midnight Mass creator Mike Flanagan’s previous Netflix effort The Haunting of Bly Manor and one of his next (likely an adaptation of Something is Killing the Children).

Though many projects film in Vancouver, Midnight Mass was among the first to do so amid the pandemic. Production started in Garry Point Park in December 2019 before shutting down in March 2020 when the COVID-19 pandemic really got rolling. The show resumed filming in August 2020 before concluding in December.

“At the very beginning, it was terribly frustrating,” Erin Greene actress Kate Siegel told Den of Geek and other outlets. “You (couldn’t) actually talk to anybody and our director is behind his KN95 and his goggles and his face shield. When he starts speaking, all of it fogs up. So on some level you’re being directed by Bane.”

Siegel goes on to note that the isolation from other actors eventually became a blessing in a show primarily about personal isolation. And when it comes to isolation, what better place to be than a tiny island and its 127 citizens?

We know for certain that Crockett Island is fictional but if it did exist, where would it be? That is a harder question to answer than one might think. Though the citizens of Crockett Island mention “the mainland” dozens of times throughout the series’ seven episodes, they actually never specify which city, state, country, or region that “mainland” is. In fact, the only real life location that appears in the show is in the first scene in which Riley gets in a fatal car crash outside Manhattan. Erin Greene also makes mention of running off to “New York state” and Austin, Texas upon leaving home.

There really isn’t much hard evidence to go off to determine Crockett Island’s location within North America. So instead, all we have to rely on is basically vibes. And in terms of vibes, Crockett Island does feel vaguely New England. Many small islands populate the Northeastern coast of the United States, and a lot of them have climates that could safely be described as “sweater weather.” There’s also the fact that Mike Flanagan was born in Salem, Massachusetts and served as an altar boy in a small church in Governor’s Island, New York when he was 10.

Maybe that’s all just conjecture on our part though. Perhaps this story resembles that of ‘Salem’s Lot closely enough that it just feels right that it would take place in Stephen King’s home region. What is clear, however, is that Midnight Mass truly goes out of its way to never reveal Crockett Island’s real coordinates as ultimately that’s not important to the show. This remote island that’s home to only dozens of people is designed to resemble many small communities.

Hopefully all those other small communities around the country don’t have the same “Angel” problems.

Link Tank: Avengers: Infinity War vs. Avengers: Endgame – Vote for the Best MCU Movie
Everything You Need To Know About The Activision Blizzard Scandal
Bad Buddy and the Subversive Sentimentality of BL Storytelling
Star Wars: The Book of Boba Fett Episode 5 Review: Return of the Mandalorian
Snowpiercer Season 3 Episode 1 Review: The Tortoise and the Hare