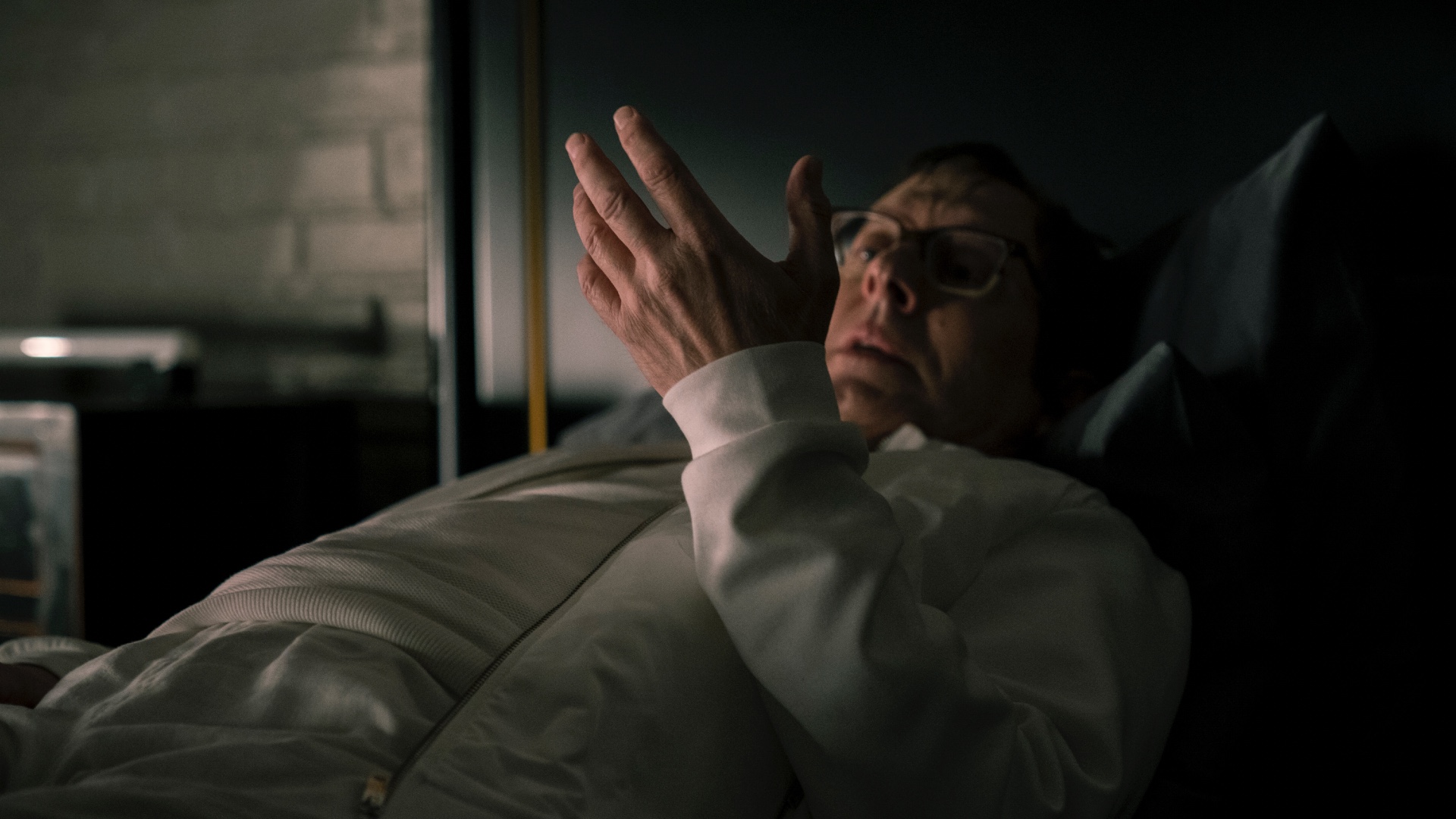 Leland (Michael Emerson) does all the voices, from the venerated holy relics of The Exorcist to Laraine Newman’s Shirley Temple in Saturday Night Live’s takeoff on it. He tosses priests across rooms with one hand tied to a bedpost. He sweats, swears and pukes vile, living, inky blackness from the bowels of hell. He looks lost and defeated, beaten, and busted. But when it’s all over, Leland gives a knowing wink to a suspicious David Acosta (Mike Colter), and bitches about the new kids on the block and those awful fashions. Satanism is not a flavor of the week, at least not this week.

The Catholic Church splurges on its rival’s T-shirts only to find they are knockoffs for the latest installment of Evil. This is by design. They were told to find bad stitching in the very fabric of the manufacturer. “I Is for IRS” is a taxing episode on many levels. Not only is the paranormal team tasked with auditing a newly incorporated satanic church, the episode is filled with major and minor level body horrors. Ooze, pus, gaping abdominal wounds, and other ghastly fluids have a guest starring role on the proceedings, and they certainly get the horror juices flowing.

The opening sequence is a marvelous bit of silent film. With only a musical accompaniment, we see the seemingly drugged out path Sheryl (Christine Lahti) is gliding. She, Leland (Michael Emerson) and Edward (Tim Matheson) have some kind of secret arrangement and, in the afterglow of the shifting settings, it looks like quite a complex caper. We don’t know what Sheryl is getting out of this. But she is giving her very blood for the cause. The unhealthy looking light brown fluid which is replacing it is a mystery substance, as frightening as any monster-of-the-week the series has provided, and its effects are no less mystifying. On the surface, it looks like she needs these infusions as much as a hole in the head, but that comes later.

After what appears to be the most horrific, personal assault which can be perpetrated on a person, Sheryl comes out of it energized, happy and ready to binge Flight of the Conchords. In an interview with Den of Geek, Lahti said the elixir acts like a body spa, filled with vitamin B and other rejuvenating substances. But you can also say the same thing about blood and vampires. By the end of the opening sequence alone, it appears Sheryl may be giving far more than blood. But just when you think there’s a whole new Sheryl in Sheryl, out pops Leland.

Leland Townshend is an enigma, wrapped in a white sacramental taco, and dipped in blood. He’s not the devil, he may or may not be possessed, and he may be as much of a danger to himself as to others. Even David questions his doubts about the self-professed demon worshipper who has been mocking church authority while looking for a crucifix. Leland actually is accumulating quite an assortment of rosaries. He’s been gifted with beads of personal conviction by almost every member of the clergy he meets. With the exception of Sister Andrea, who doesn’t appear during the episode, he is never scrutinized, no matter how much he begs for it.

The investigation at the heart of the series is intriguing more for the hypocrisies it exposes than the suspension of belief at the center of any faith. Ben’s (Aasif Mandvi) forensic tech expertise is really the end of the New Ministry of Satan. The differences between Left Hand Path and Right Hand Path magic mean nothing to an ambidextrous atheist with fleet fingers and faster WiFi. Ben notes each exemption the Catholic Church enjoys which they would deny the Father Below, while David appreciates the many advantages to altar boy replacement. The CEO of the New Ministry of Satan misinterprets the soon-to-be-ordained priest’s commentary as an objectifying dismissal, while David infers the concept of sexual abuse lawsuits with a second glance.

Kristen is far more vocal in her comparisons between the two churches, but proves herself to be much less discriminating. “Priests do well, that’s what I heard,” she says early in the episode when discussing David’s prospects for sexual union after his ordination. Kristen is on a wild ride which leads to a rude awakening in an unexpected twist towards absolution. But is it absolute? Does it have to be? Just when you think Kristen’s husband Andy (Patrick Brammall) will be free of the tendrils of evil and psychological warfare, they pull him back in in a kumbaya moment. This is fine while Kristen is off her meds, but it will leave the skull-burning Djinn with too much time on his hands. It appears that whatever connection Kristen has had historically with Leland is now as solid as an umbilical cord.

Kristen’s response to Leland’s exorcism opens many possibilities and begs questions. There is an ambiguity to some of the actions, but others are too easily interpreted. She is mouthing Leland’s baptism, she hallucinates giving birth to a demonic fetus, blames her therapist in a paranoid outburst, and then appears to find some kind of solace. It even looks like it could be a spiritual epiphany. Over the course of the series, we know she receives some kind of preferential, if not special, treatment from RSM Fertility. The facility is run by religious fanatics, but harvesting very, very bad eggs indeed.

The New Ministry of Satan also turns out to be bad eggs. No, they are not evil in the sense of theological usurpation or any specific threat to civilized or ecclesiastical society. They bend but don’t actually break the rules of religious organizations: Must focus on worship, not be about making money, be legal, and not involved in politics. The leader’s name, Graham Lucien, sounds like the pseudonym of the co-founder of The Satanic Temple, Lucien Greaves, who actually does see the political possibilities of diabolical worship.

But they break the sacred rules of geometric satanic grammar. “Do what thou wilt shall be the whole of the Law” and “Love is the law, love under will” are mathematically phrased, and contemporary vernacular cuts that even if the backwards phrasing of satanic prayer is easier with modern tech. The juxtaposition of the two in the temple scene doesn’t seem unintentional. It appears to be foreshadowing through commentary.

Written by Dewayne Darian Jones and directed by Nelson McCormick, “I Is for IRS,” is a chilling, creepy and conspiratorially satisfying offering. It leaves much more open ends than closure, which includes the wounds inflicted. Whether Leland is faking or not, Evil is keeping it real by questioning reality.

Marvel Studios’ Moon Knight | Trailer Reaction | Disney+
Link Tank: Avengers: Infinity War vs. Avengers: Endgame – Vote for the Best MCU Movie
Rainbow Six Extraction: Every Operator Ranked Worst to Best
The Walking Dead Season 11 Trailer Puts the World Back Together the Way it Was
Everything You Need To Know About The Activision Blizzard Scandal