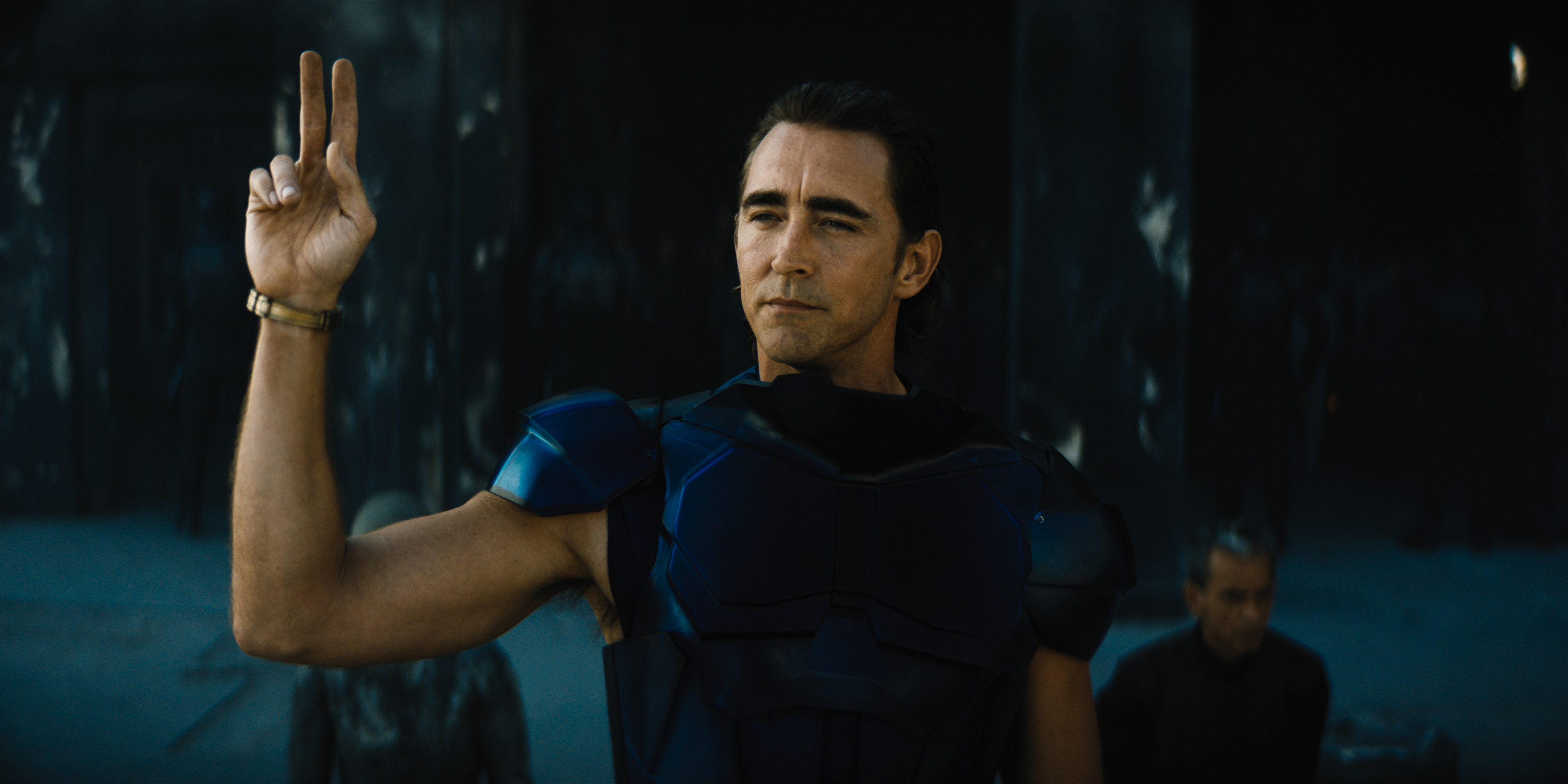 This article is presented by Apple TV+. Click here for a free trial to stream Foundation!

When considering the adaptation of a classic science fiction universe as massive as Isaac Asimov’s Foundation series, the sheer scale of such an enterprise seems quite daunting. How can Apple TV+ take a story that spans centuries in a galactic empire with thousands of inhabited planets and make it accessible both to hardcore fans and to audiences unaccustomed to “space opera” sci-fi? When viewers watch the first three episodes of Foundation, set to release on September 24, they’ll see Asimov’s world come to life in an expansive yet character-driven vision that will please both groups.

The key lies in building upon the skeleton of the original Foundation trilogy, which in turn was formed from a series of short stories written in the 1940s. By its very nature, the Foundation narrative was composed primarily of exposition, dialogue, and events happening off-stage. Readers learn of Dr. Hari Seldon (played by Jared Harris in the show) and his scientific predictions of the long-lived Galactic Empire’s fall, but then they quickly jump ahead 50 years to witness the decline through reports and visitors to the titular foundation, which seeks to preserve human knowledge during the inevitable dark ages to come.

There’s plenty there to work with and expand upon. In the book, the predictive mathematics of psychohistory were explained to Gaal Dornick, a green recruit to the Seldon Project from a backwater planet. The television series digs deeper into this characterization for actor Lou Llobell’s version, making her a math prodigy from a deeply religious, scientifically repressed world. There’s much more to her participation than simply bearing witness to the Empire’s reaction to Seldon’s seditious theories.

In fact, where Asimov’s short stories skipped ahead in time, the Foundation of Apple TV+ is able to explore more of how the burgeoning colony that sprung from Seldon’s theories developed and survived, allowing Dornick to continue a character arc that didn’t exist in the original novel. Additionally, the Emperor himself, played by the formidable Lee Pace, takes a much more immediate personal interest in the foretold end of his reign than anything found in the books.

Asimov himself realized the narrative possibilities when he revisited Foundation for a new trilogy in the 1980s. In the author’s note for Foundation’s Edge, he says that, upon re-reading his earlier work, “I kept waiting for something to happen, and nothing ever did. All three volumes, all the nearly quarter of a million words, consisted of thoughts and of conversations. No action. No physical suspense… each book in the trilogy had at least two stories and lacked unity.”

Just as the author discovered he could revise the format of his storytelling for the next book in the series, the television adaptation does the same for a visual medium. An off-stage emperor, for example, isn’t as interesting as a triumvirate of clones led by Brother Day, who rules alongside younger and older versions of himself, known as Brothers Dawn (Cassian Bilton) and Dusk (Terrence Mann). Each has their own foibles based on their age and station, giving the fall of an empire personal stakes that viewers will sympathize with, even in villainy.

Neither Asimov nor the Foundation television series stopped there. One enigmatic character  that the author didn’t even introduce until the second trilogy makes an appearance in the first round of episodes on Apple TV+: that of Laura Birn’s character, Eto Demerzel, an imperial advisor who carries an interesting secret. Asimov repurposed Demerzel from one of his other famous novels in order to create a shared universe, and now the TV series likewise has brought her forward to the start of the story to add a different perspective on the empire’s decline.

As for waiting for the fall to happen, Foundation doesn’t immediately fast forward through time to see signs of societal uproar as in the novels. Instead, the show reveals the seeds of discord in an interplanetary rivalry between two cultures on the edge of the Emperor’s sphere of influence. This subplot acts as an illustration of Seldon’s predictions, magnifying Brother Day’s justifiable fears that the forecast doom will become a self-fulfilling prophecy.

Despite all the changes Foundation made to some characters and circumstances in its source material, fans of the novels will be in awe of the depiction of Trantor, the planetary seat of imperial power. The sky of metal, the vast underground network, and the star bridge are rendered with such accuracy, viewers will think they sprung directly from their imagination and remembrance of Asimov’s descriptions.

In fact, all of the planets that Foundation visits in the opening few episodes have their own special atmosphere, from the vast waters of Dornick’s home on Synnax to the harsh wastelands of the foundation’s settlement on Terminus. All of the landscapes are beautifully shot, and viewers will quickly feel immersed in these environments, even if they only get to visit them for a short time. Even though the story jumps back and forth in time, it’s always very clear where things are happening.

That’s because Foundation necessarily tells its stories in parallel, teasing the future of the Seldon Project with glimpses of Leah Harvey’s character, Salvor Hardin, the warden of the colony world where the foundation carries out its mission decades after Dornick and Seldon meet. The nature of information secured within a Vault that repels any attempt to approach it is shrouded in secrecy at the start of the season, and readers of the Asimov novels will anticipate its opening as eagerly as those who don’t know its contents.

Of course, the Empire must fall before a new order can rise, and some fans may wonder whether they will see important figures like The Mule, a key conqueror in Asimov’s first trilogy. Can there be a Foundation adaptation without The Mule? And the answer is that this is not a limited series on Apple TV+. There is plenty of time to cover the many twists and turns of the galaxy’s history in this and future seasons of the show.

In the meantime, viewers who have read the books can enjoy the irony of Gaal Dornick’s rejection of her home planet’s strict faith in order to join a foundation whose science is destined to become a sort of religion of its own during the less advanced civilization that will follow the collapse of imperial rule. Throughout Asimov’s work there was always the question of how much Hari Seldon really knew and planned for, and the television series can capitalize on that mystery equally well.

There’s so much packed into the first season of Foundation, and the groundwork laid by the source material provides endless inspiration for stories within the larger story of the fall of an empire. Even the preparations for survival and the subsequent colonization of Terminus, details of which the novels never chose to explore, provide a wealth of drama during the first few episodes of the show. So while the Apple TV+ series departs quite a bit from the Asimov tale, the foundation, so to speak, of Foundation remains.

Foundation releases Sept. 24 on Apple TV+. You can stream it for free courtesy of Apple! This article was produced in paid partnership with AppleTV+. All opinions expressed are those of the author.