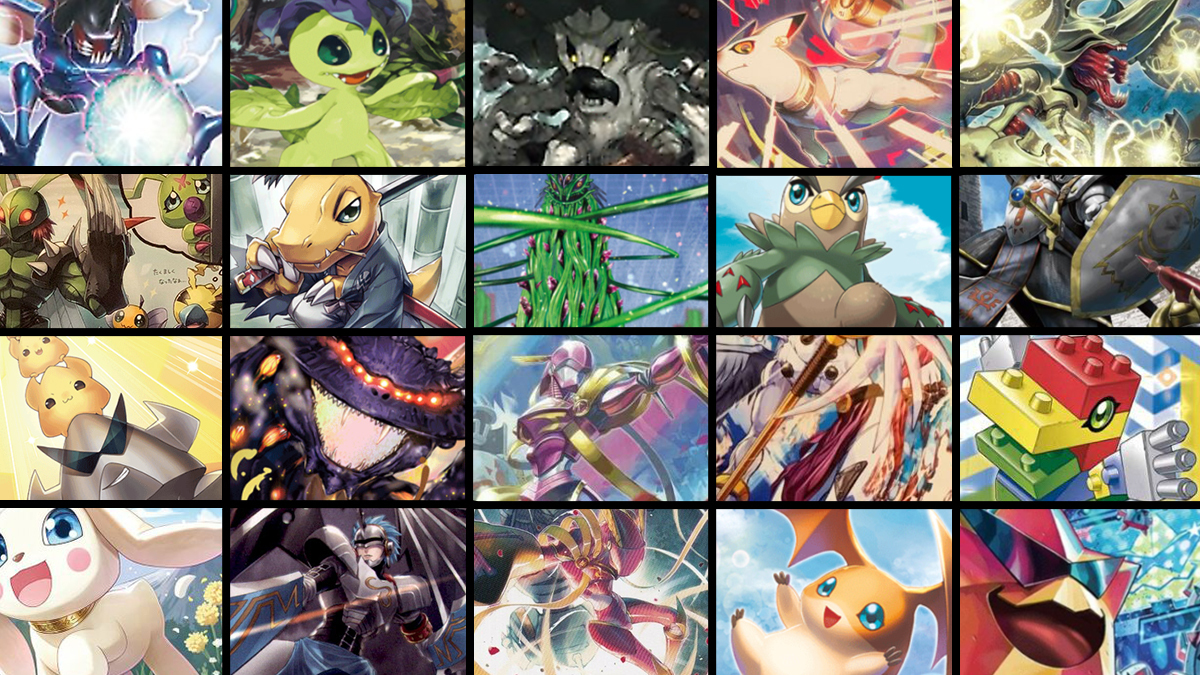 This article is part of our Collector’s Digest editorial series powered by:

The new Digimon TCG finally made its English debut earlier this year, and it’s already making a name for itself. More players flock to the game with the release of each new set, and a real tournament scene is starting to heat up.

If you want to enter a tournament and make real waves, you can’t just play with any old deck. Here’s a look at some decks making waves in the Digimon TCG scene and how to put them together:

If you’ve done any amount of research into the Digimon TCG meta, you’ll know about “Rookie Rush” decks. Instead of building up teams with powerful Digimon, Rookie Rush decks focus on ending the game as quickly as possible with a slew of Rookie cards.

Successful Rookie Rush decks are almost hybrid, bringing Rookies from more than one color type. Luckily, these decks are also relatively cheap, as you won’t need to buy any Secret Rare boss monsters.

When it comes to exactly what Rookies you want to build for your deck, there are tons of options, but a deck recommended by YouTuber TrueChampionSteven specifically caught our eye. Focusing on yellow and green Digimon, the deck is focused around getting as many Digimon on the field as possible to defeat your enemy incredibly quickly. The only card that is particularly expensive in this particular build is Pulsemon, which goes for around $40 on average. Its effect is particularly powerful, however, so it’s a good idea to have one in your build.

Luckily, Pulsemon is by far the most expensive card in the deck. Others, such as Starmons, can be found for as low as $0.14 and massively reduce your enemy’s chance of defending against your Rookies. Spiral Masquerade, which goes for an average of $0.26, can also help keep enemy Digimon from defending, significantly lowering their DP. Cards such as Blinding Ray, which goes for an average of $0.24, allow you to build up your memory and swiftly get rookies on the board.

If you don’t happen to take care of your opponent as swiftly as you may want to, no worries. Cards such as Salamon, which goes for an average of $1.50, allow you to recover some lost security, keeping you in the game for longer. Pairing cards with powerful effects with Rookies with high DP such as Aruraumon and Falcomon allow you to hit hard and fast, quickly destroying enemies that aren’t prepared.

For those looking for something with a little more setup that can counter aggressive builds such as Rookie Rush, yellow LordKnightmon decks are the way to go.

This deck, which also runs primarily yellow, is built to allow you to build up powerful Digimon while also keeping your enemies at bay with constant DP reduction. Using Pickmon as your main digitama, which goes for around $2 on average, you can begin each game with a relatively strong DP reduction skill in place as you eventually Digivolve into stronger Digimon. Just like the last deck, Starmons and Pulsemon fit well as the deck’s Rookies, allowing for further DP reduction and draw opportunities. Adding these with rookies such as ST3 Patamon and BushiAgumon, which both go for around $1, allow you to wipe your opponent’s board and memory early in the game.

Moving on to Champion Digimon, yellow staples Turuiemon and Piddomon, which both go for around $1, are primarily used as blockers in this deck. Their low evolving cost makes it easy to get them on the field to block aggressive decks, saving your skin time and time again in bouts with Rookie Rush decks.

Wargrowlmon and Knightmon, both hovering around $1, make solid attackers, with both card’s heavily decreasing enemy DP. Once you can get the deck’s namesake in play, LordKnightmon, you become incredibly powerful. Going for around $15 on average, LordKnightmon allows you to play lower cost cards for free while attacking and boosts its DP by 1000 for each Digimon you have in play, making it very tough. Pairing this with SlashAngemon, which goes for about $1.50, allows you to boost LordKnightmon while also heavily lowering enemy DP.

Yellow decks aren’t the only ones making names for themselves in tournaments. The Green Nidhogg deck has been heavily feature din the meta since the introduction og the Great Legends set and is a relatively cheap competitive option.

Starting with Digitama, Argomon, which goes for around $1, is your best bet. It’s effect allows players to gain whenever a Digimon evolved on top of it becomes active, giving you a ton of free memory to work with each turn. This deck uses a ton of Digimon with cheap evolution costs such as Vegiemon, Kabuterimon, and Cherrymon, which go for $0.50, $6.50 and $0.70 respectively. These cards have respectable DP making them viable attackers. Kabuterimon and Cherrymon are both also incredibly cheap blockers, making them great for defense. Slightly more expensive cards such as Lvl. 5 Argomon and Blossomon, coming in at $0.20 and $0.70 respectively, are also viable options, as their download effect can make them much easier to get on the field for cheap.

The real star of this deck is its pair of boss Digimon: Nidhoggmon and HerculesKabuterimon, which go for $10 and $2 respectively. With each Digimon in the deck already having a low memory cost, your board will fill up quickly. Seeing each of these Digimon with a memory cost of five might be intimidating at first, but fret not. Adding four Hidden Potential Discovered! option cards, which go for $0.70, allow you to suspend one of your green Digimon to reduce Nidhoggmon and HerculesKabuterimon’s cost by five. You read that right; each of the boss monsters can now be summoned for free, granted you have the right cards in play and Hidden Potential Discovered! in hand.

If you can get Nidhoggmon and HerculesKabuterimon on the field at the same time, they are a scary duo. HerculesKabuterimon’s ability allows him to suspend your opponents boss monster while Nidhoggmon’s allows him to send all of the opponent’s Digimon with 5000 or less DP back to the deck. This is a great way to wipe your enemy’s field, and, with both cards touting impressive DPs, they are also both fantastic attackers.