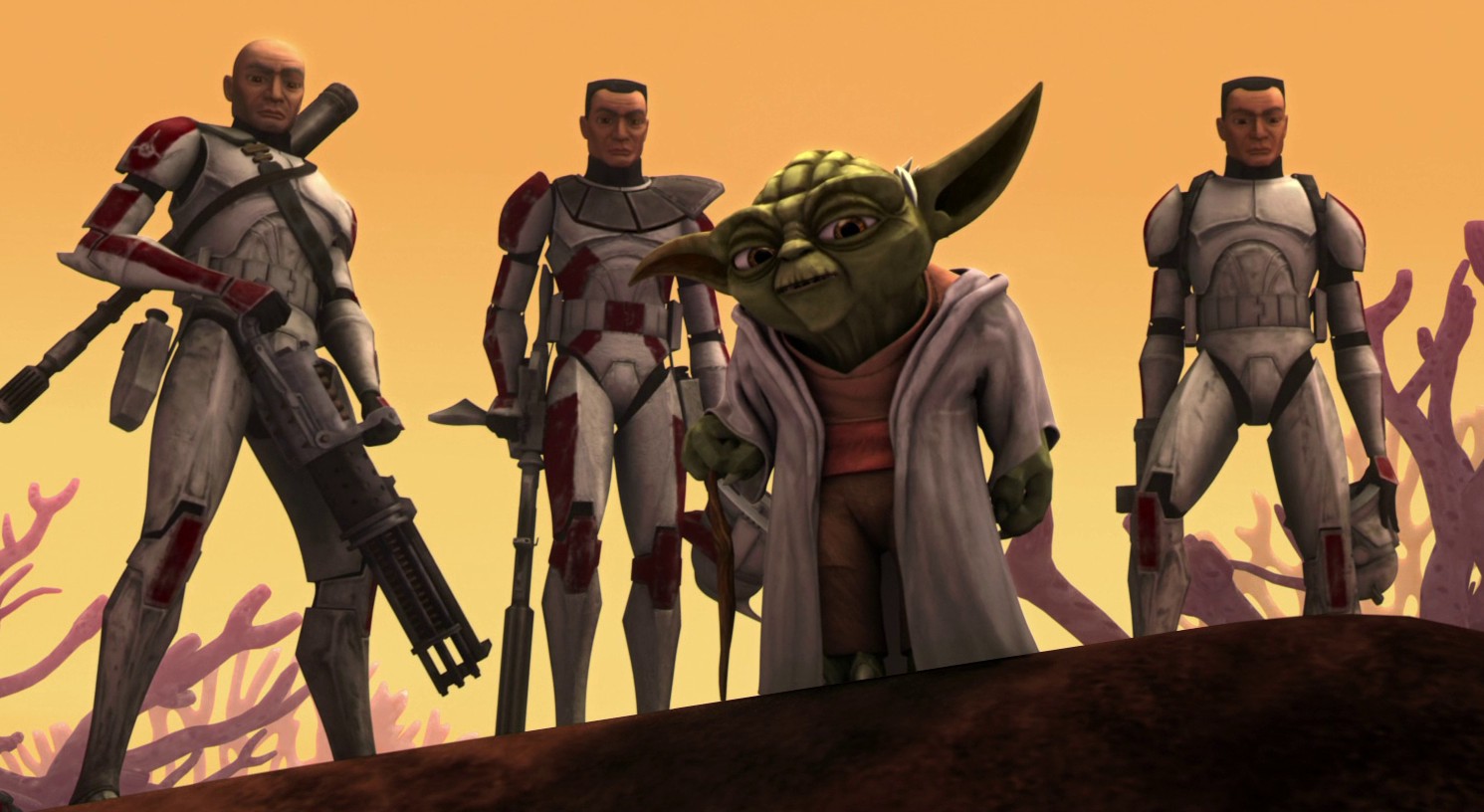 “Ambush,” the first episode of Star Wars: The Clone Wars, opens with a simple question: who is stronger, an army of droids, or a single Jedi Master?

Well, when that Jedi Master is Yoda, fans can be pretty sure of the answer, and “Ambush” delights in that certainty.

The episode is an action-packed, droid-busting romp, with a short interlude for Yoda’s serene Jedi wisdom. It’s an episode unlikely to be accused of being deep. And yet, “Ambush” carefully seeds the paradoxes that will ultimately cause the downfall of the Jedi. How can the peacekeepers of the galaxy be its generals? How can the Jedi stand for the sanctity of individual life while endorsing the use of a bred-for-battle clone army?

The episode opens on a non-aligned planet, remote but strategically significant. Both Republic and Separatist forces wish to build a military base there. Yoda arrives to make the Republic’s case, but his ship is shot down, stranding him with three clone troopers. Meanwhile, Asajj Ventress, the perpetually-scowling apprentice of Count Dooku, tells the planet’s leader, King Katuunko, that he is foolish to throw in his lot with the Jedi. After all, the Separatists’ droid armies outnumber Republic forces one hundred to one. When Katuunko responds that he has heard a single Jedi is worth a hundred droids, Ventress proposes a contest: her droid battalion against Yoda and his troopers. The winner of the fight wins the planet.

There’s never any real dramatic tension. Looking down at a full battalion of battle droids, Yoda quips, “Outnumbered, are they.” By the end of the episode, the battle droids are scrap metal and Yoda has won the allegiance of King Katuunko, who declares that a single Jedi is actually worth a thousand droids. From the opening exposition, delivered in a form reminiscent of war-time propaganda reels, to Yoda’s defeat of Ventress, tugging her dual sabers from her hands like a chew toy from a disobedient puppy, the whole episode comes off as an advertisement for the Republic.

But what exactly is being advertised? “Ambush” presents us with an idealized view of the series’ titular conflict, pitting a noble Jedi Master against an army of comedic droids. It gives us the fairy tale of a war without moral quandaries―a fairy tale that the rest of the series will slowly puncture as it winds inevitably towards Order 66 and the fall of Anakin Skywalker.

Yoda’s reluctant co-stars, initially baffled by their overly zen boss, are three clone troopers―Jek, Thire, and Rys. Midway through the episode, the group huddles for rest in a cave, and Yoda requests them to remove their helmets. Staring into their identical faces, Yoda professes that each life-form is unique in the Force. He proceeds to give each clone a personalized Jedi pep-talk.

The interlude foreshadows the central place that clone troopers occupy in The Clone Wars. The series refuses to allow them to be the faceless shock troops they so easily could have been. In the episode “Rookies,” the show gives us an entirely clone-driven drama, with Generals Kenobi and Skywalker relegated to pacing around a conference room and occasionally checking their comms. The series recognizes it has few tools to give the clones unique identities―their identical faces and voices, in a show with a limited animation budget, naturally predispose the viewer’s eye to blur. The five minutes “Ambush” dedicates to affirming the clones’ personhood with the weight of Yoda’s endorsement plant the flag for the rest of the series.

But a bitter irony laces Yoda’s remarks. He tells the third clone trooper that he will win by surviving the war. This advice sits uneasily with the reality that the clone troopers are bred to die. Designed with accelerated aging, they are not meant to have a life after the war. This tension comes to the fore in a later episode, “The Deserter,” in which Commander Rex confronts a clone who has chosen to desert the Republic Army and raise a family. That clone points out to Rex that they were never given a choice to fight in the war―their obedience has always been taken for granted. Rex insists that he wants to serve the Republic, but he also declines to report the deserter as a traitor, recognizing his fellow clone’s right to self-determination. In “Ambush,” Yoda certainly treats his soldiers as individuals worthy of respect, but he does not interrogate the larger injustice of their situation. When push comes to shove, the clone army is simply too convenient for the Jedi to turn down.

“Ambush” demonstrates that Jedi are very good at beating up droids. But it is not droids that seal the Jedi’s fate. In the end, the Jedi fall to their own: to the clones whose service they failed to question and to the Jedi they turned into soldiers. Palpatine is able to sell the story of a Jedi coup to the public because throughout the course of the Clone Wars, the Jedi have become synonymous with military power. When the people of Coruscant gather to protest the war, they gather not outside the Senate, but outside the Jedi Temple.

In “The Wrong Jedi,” we learn that Bariss Offee, a mild-mannered padawan, has become so disillusioned with the Jedi Order that she has helped arrange the bombing of the Jedi Temple, all in the name of peace. Confessing to her crime, she declares, “I’ve come to realize what many people in the Republic have come to realize. That the Jedi are the ones responsible for this war. That we’ve so lost our way that we have become villains in this conflict.”

The nature of the Jedi’s fall―from peacekeepers to generals―is apparent in the framing of “Ambush.” “Cowards,” proclaims General Yoda, “are those who use the dark side.” But to King Katuunko, who offers him his allegiance with an unsheathed knife, there is no dark side or light side. There is just a simple equation: one Jedi > one thousand droids. There is only the subtle but insidious assumption that Jedi are best defined by the destruction they can mete out.

“Ambush” poses a simple question: who is stronger, an army of droids or a single Jedi Master? By the conclusion of The Clone Wars, we realize that in answering this question, the Jedi have already lost.