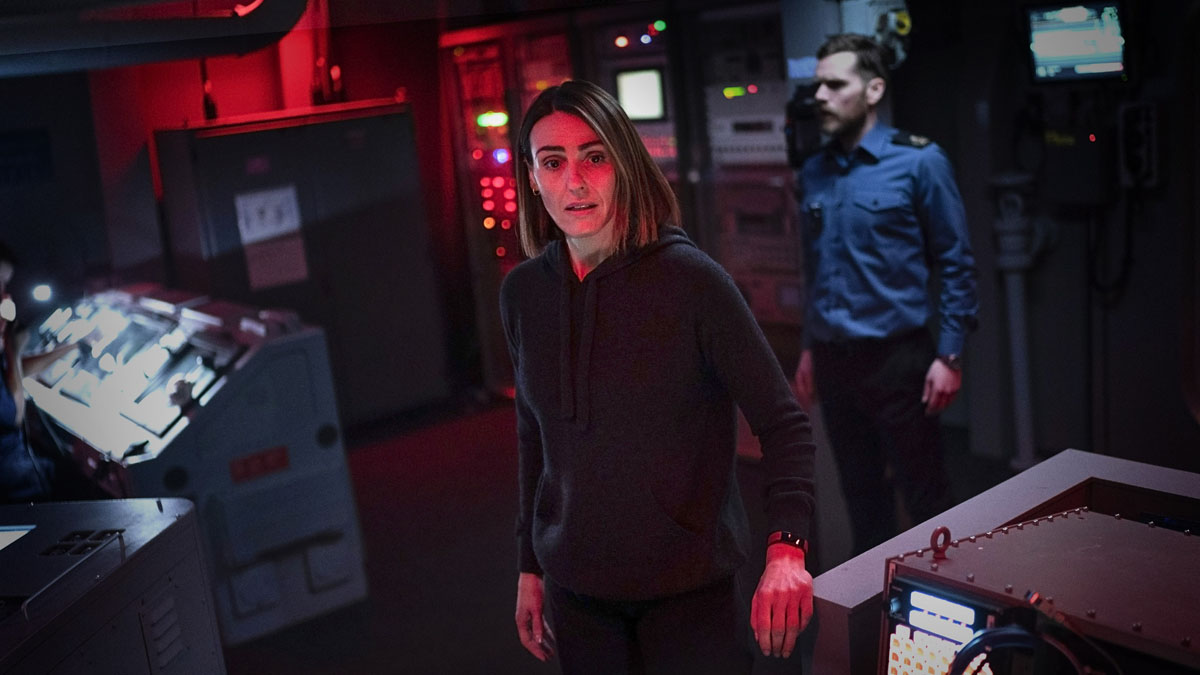 A booming naval salute to Vigil, which marks the return of the Sunday night BBC One drama after a long absence for reasons of football, Olympics, and allegedly, summer sunshine. From the writer of BBC detective series Strike, this thriller is just the thing to take us into autumn. It has it all: peril, intrigue, murder, Suranne Jones being winched from a helicopter onto a submarine like a prize toy in an arcade claw machine, and a conspiracy that (likely) goes all the way to the heart of the top of the uppermost ridge of the establishment. Strap in.

“How are you with confined spaces?” DCI Amy Silva (Jones) is asked by a smirking lieutenant when she’s picked to investigate a death on board a naval submarine. Not great, judging by a flashback to Silva’s family trapped underwater in a car accident. It’s little wonder the detective brooks no truck with an activist lying in the road to HM Dunloch as part of an anti-nuclear protest.

The death Silva’s investigating didn’t just happen on any naval submarine, you see, but on HMS Vigil, one of the four vanguard class armed nuclear submarines that make up Britain’s continuous-at-sea deterrent Trident. That’s the kind of dialogue you get in Vigil – it has the hypnotic hum of officialdom, lulling viewers into a bliss state of dazed compliance. Alerts and orders are repeated multiple times (“Casualty, casualty, casualty.” “Prepare to return to periscope depth,” “Preparing to return to periscope depth.” “Dive the submarine,” “Dive the submarine.”) It’s a seductive rhythm with an involuntary spine-straightening effect. I could be a submariner, you start to think. Then you see how small the bunks are, how everything’s either at the top or bottom of a ladder, how you’d have to stretch Cling-Film over the top of your mug so as not to spill any PG Tips on the nuclear missiles, and think again.

Another entry in the ‘no’ column: murder! No sooner do we meet Line of Duty’s Martin Compston as Chief Petty Officer Craig Burke than he’s zipped into a body bag and shoved up a torpedo tube. Burke died of a heroin overdose, says the Navy, but Silva says otherwise. She and Burke’s anti-nuclear activist girlfriend think he was was killed as part of a conspiracy. That much looks clear when Silva’s on-land partner (Game of Thrones’ Rose Leslie) unearths a video of Burke blowing the whistle and predicting that “they’re” coming for him.

Who is coming for Burke and which particular whistle he’s blown is for Silva to work out over the next five episodes (the second instalment airs tomorrow before regular Sunday service is resumed). Might it have to do with the enemy boat that’s possibly shadowing HMS Vigil – an act Paterson Joseph’s Commander Newsome describes as the single most frightening development in submarine warfare in his lifetime? In all our lifetimes, probably.

Whatever’s going on, Silva will get to the bottom of it. Suranne Jones’ character is gloriously competent and no-nonsense. Even with her standard-issue detective’s tragic backstory and PTSD, she’s exactly who you’d want investigating your murder and/or uncovering the next stage of the Cold War. She’s sure to find out why everyone talks about HMS Vigil as if it’s the Robbie Williams bad boy of the Trident Four, and why there seems to be no love lost between Burke and his fellow sailors.

The mystery arrives flanked by exciting action courtesy of Broadchurch and Vanity Fair director James Strong. The opening sequence shows a fishing trawler accidentally snag on a hidden submarine and get dragged beneath the waves (as happened to the real-life crew of The Antares in 1990). The cliff-hanger ending sees Vigil’s nuclear reactor go into emergency shutdown. Next ep: they battle a kraken, or something equally exciting.

The submarine setting makes Vigil a top twist on a familiar genre. The show’s essentially a country house murder mystery, if the country house were a top-secret nuclear-powered spaceship onto which Poirot had to be lowered from a helicopter. (Secrecy is so imperative when it comes to Trident boats that for reasons of national security nobody – not even the makers of TV drama – are allowed to know what they look like. Vigil’s creators made this one up on a best-guess basis and built it in a Dumbarton studio.)

Episode one really does have all the makings of the perfect Sunday night drama: a multi-layered puzzle, intriguing alien environment, peculiar vocab like “coxswain” (remember what a laugh we all had with Line of Duty’s acronyms, and how fun it was to bleat the word “kompromat” like excitable Daleks after 2018’s Bodyguard? Get ahead of the trend by addressing your cat as “Officer of the Watch” from now on), plus a very decent cast. In summary: get on board.

Vigil continues on Monday the 29th of August at 9pm on BBC One, and thereafter on Sundays at 9pm.