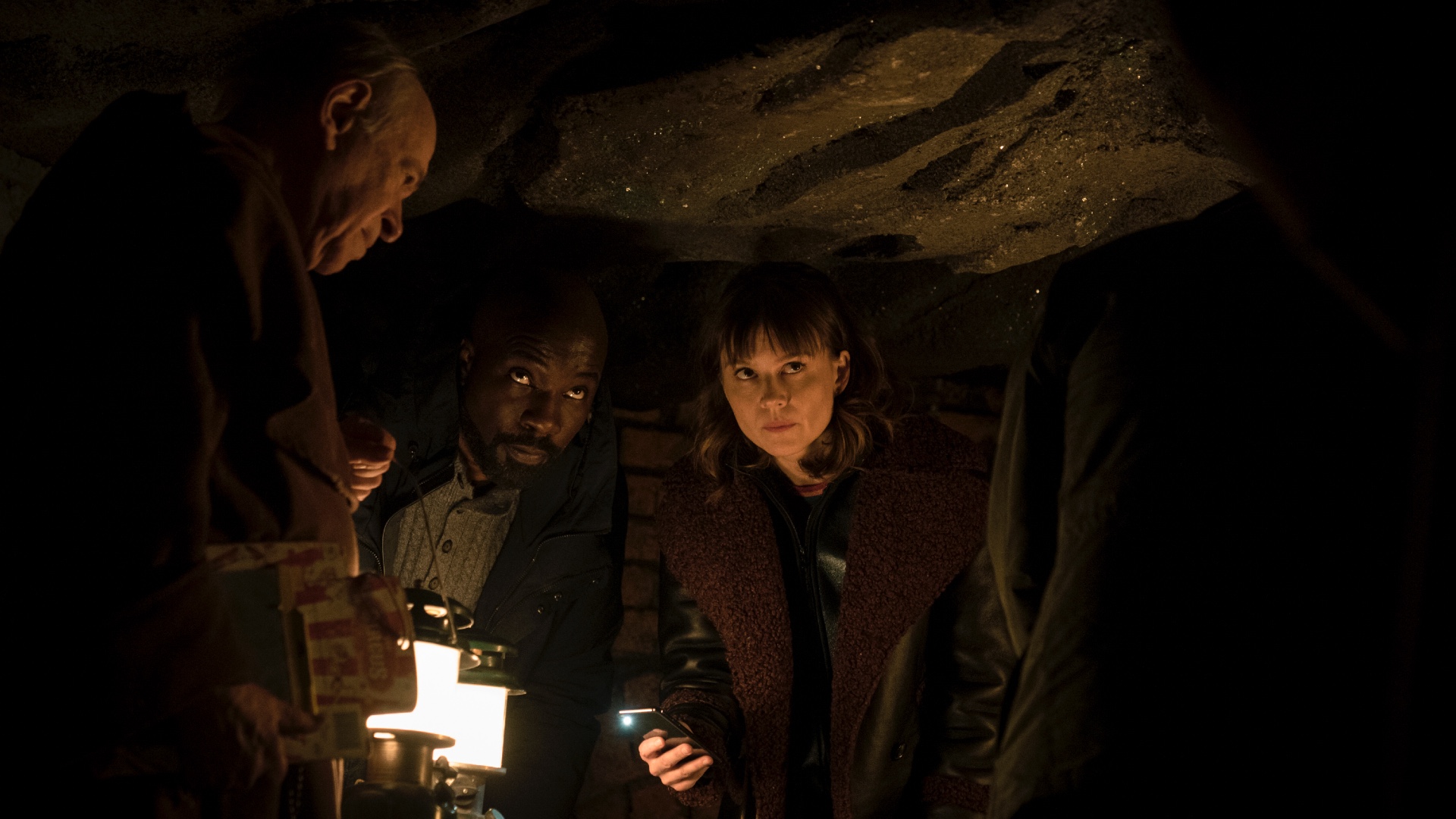 Moving from the networks to the more risk-taking Paramount+ brings more fun and experimentation to Evil season 2. Episode 7, “S Is for Silence,” takes its title seriously, but also humorously, as the series presents its first entry into the silent genre of visual storytelling. Half the team go off exploring the shadowy darkness of impressionists, the other explores silent comedies.

Not a word has been spoken within the walls of the monastery of St. Thomas in 130 years, reads a sign just inside the gate. The compound and structure were built around an apocalyptic demon, who was captured and is held in an ornate and sanctified crate oozing ectoplasmic residue. The team is met by Father Winston, who hands each of the team a vintage magic slate paper to communicate with, one from Star Trek, another from Casper the Friendly Ghost and the third of a classic Robin Hood.

The head monk with the inviting eyes is played by veteran character actor Kenneth Tigar, who has been putting in supernatural performances for decades. His work on Barney Miller alone saw him as a man possessed in one episode, someone with multiple personalities in another, and also as Jesus, who turned heroin into baby powder to give a sinner a second chance. His turn as the werewolf Kopechne contains one of the greatest scenes of physical and character comedy tied to terror on a sitcom.

“S Is for Silence” can almost be seen as an homage to the horror comedy tradition. It has as many squeaky staircases and hidden rooms as Abbot and Costello Meet Frankenstein. Let’s face it, silent monasteries are a comic perennial going back at least to The Odd Couple, and Katja Herbers gets to play out whatever Lucille Ball fantasies she may have entertained as an actor in her scenes with the young stigmatic nun. Dr. Kristen Bouchard doesn’t smash grapes, but she gets her feet wet, and also gets a little tipsy. The suppressed giggles make the scene completely believable, and yet add to the comedy. It is definitely the most playful and whimsical the series has ever offered. If only Kristen had these moments with her daughters.

Evil hasn’t had much of a chance to explore physical humor before this, and certainly not so gleefully. Most of the physicality of the suspense series has come in service of frights, which we also have here in abundance. Vows of silence are delicate things, and offer too much of a temptation to shatter them, both from the whimsical and horrific palette of possibilities. The monks and nuns have to sleep with gags on in the event they scream out in the night, and there are things to yell about. Kristen has one encounter which brings her to the edge of her muzzle. Fantasy film fans will automatically be reminded of Jason and the Argonauts in this wonderfully suspenseful sequence. To be fair to the bony intruder, Kristen may have called this on herself. Not because she says “boo” before bedtime, but in penance for flashing the monks.

Kristen does have a knack for inviting demons, in general. They are with her when she drives, walks, or gets stuck between floors. Though her elevator story didn’t hit the depths of the fear it would reach when it got to the sub-basement level. Ben (Aasif Mandvi), once again, gets the creepiest torments in this installment, and probably has the most cause to break down and shriek. He does it with his eyes, almost as loudly, which is a scream to watch. Mandvi is doing quite a few things as he bolts from murky darkness. Even as he is frantically sprinting, we can see he’s got something else on his mind besides safety. He doesn’t have the answer yet in this scene, but Ben is putting pieces together on the run.

You would think an episode without any dialogue wouldn’t push the envelope of language allowed on TV. But they do it. While “S is for Silence” isn’t Evil’s most profane offering, it contains the most profanity. And it’s beautiful. It exists as itself, has wit and wisdom, and offers solace. David Acosta (Mike Colter) can’t find peace because, stripped of the release of speaking, only the most inappropriate things come popping into his head. “Jesus died for my sins,” he ponders internally to keep himself together. “All I have to do is not think about monks throwing up for three minutes.” The scene is a cosmic joke, and could have gone on to be a running gag but turns, instead into sexual fantasy.

The relationship between David and Kristen gets sexually charged occasionally, and tonight the sparks are flying out of more than just the candles. Both are looking for clues, or seeing them in the disappearing scribbles of the slate paper. It can be the same way with looking for miracles. At first, Kristen believes the stigmata on the nun’s hands has more to do with an old rusty wheelbarrow than Father Thomas’s crucifix. She doesn’t point out how the wounds are not where nails would have been pounded to hang the weight of a crucified body, because the foot and spear wounds are almost unprecedented.

“S Is for Silence” is an innovative episode you can almost watch with the sound down. The root cause of the paranormal events which Ben hatches may not be as supernaturally satisfying as David or the audience might want, but it’s a little bit creepier. Evil is having fun, and it’s contagious enough to make you itch.