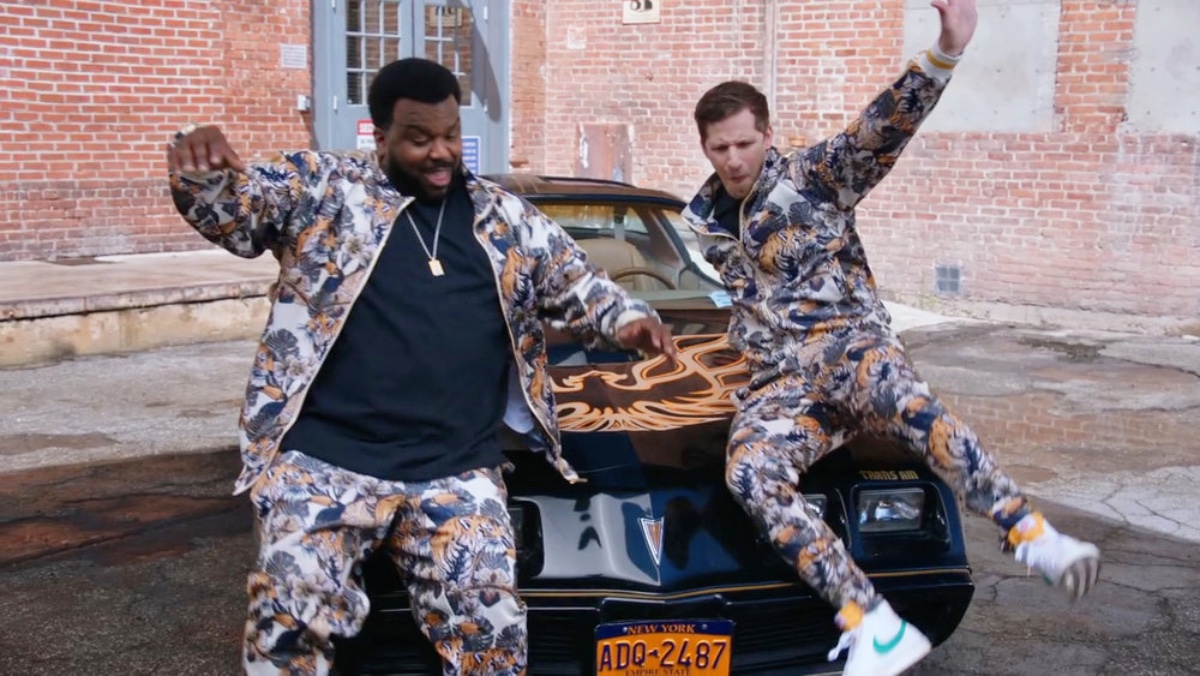 NBC is hellbent on burning through the final season of Brooklyn Nine-Nine for some reason. Each week the show has aired one traditional season 8 episode mixed with another peppered with political commentary. It’s an odd move, creating a disorienting tone and making certain episodes feel like filler. That perception is held at bay this week at least with a curtain call for the Pontiac Bandit.

Oddly, the move may be just as polarizing as Brooklyn Nine-Nine’s recent policing-focused episodes. While Craig Robinson’s appearances as Doug Judy a.k.a. The Pontiac Bandit delights many, some have complained that the schtick grew stale ages ago. While I’ve always been a sucker for a PB+J team-up in the past, this time around I’m seeing the seams that many have complained about in the past.

“PB+J” is certainly one of the weakest entries in the Pontiac Bandit saga, lacking solid twists and turns that the other installments regularly provided. This time around, Jake is alerted by Trudy Judy (Nicole Byer) that Doug is heading off to prison after being brought in on an old warrant in New Jersey. Wanting to have a last hurrah with his friend, Jake offers to drive Doug to prison with hopes of making their last ride special with ultra-specific surprises. This includes matching tiger/toucan jumpsuits, a smorgasbord of all of Judy’s favorite foods, and a freestyle beat supplied by someone loosely connected to Drake.

So how does the mischievous Judy make his inevitable escape? Well, by switching some phone numbers and an address in Jake’s phone. That’s it. Not exactly the triple or even quadruple crosses we’ve seen in the past. Also, the specific, quirky jokes that are a staple of the Jake/Judy relationship just don’t quite hit like they used. A freestyle about a prospective sandal company aside, the jokes here are trying to coast off the whimsy of Robinson’s delivery, and after so many appearances, it just doesn’t do the job.

Instead of leading Jake to the prison, Judy leads Jake right into a set-up, where Trudy and a gang of hired hands aim to free Doug. When one of the goons seems intent on killing Jake, Judy once again does the right thing and saves his friend from harm, getting himself arrested once and for all in the process. Judy debates the sincerity of Jake’s friendship and says it’s inevitable that a friendship with a cop would lead him to this, but in another instance that shows their bond, Jake discreetly provides Doug with a pen, allowing him to use his “Criss Angel” skills and escape from the police. Judy ends up in Amsterdam, smitten with his new stroopwafel-filled life.

All in all, it’s a lackluster conclusion to the Pontiac Bandit saga. It would have been hard to top season 7’s “The Takeback,” and “PB+J” doesn’t even really seem to try. The quirky charms of the Jake and Judy relationship feel phoned in and less inventive than ever before.

There seems to be a serious quality issue with the episodes this season that aren’t set around police reform and the battle with union representative O’Sullivan, and that’s very disappointing for the show in its final season, especially when season 7 featured so many funny, inventive episodes. One must wonder if a combination of fatigue and real-life issues like COVID-19 factored into the quality of season 8. With only a few episodes left, Brooklyn Nine-Nine will need to course correct and in a hurry.

The Walking Dead May Have Just Revealed The Zombie Virus Origin
Across the Spider-Verse: Who is Spider-Man 2099 and How Does He Fit In?
The Game Awards 2021: Nominees and Winner Predictions
Hulu New Releases: December 2021
Link Tank: Should These Holiday-Set Flicks Count as Christmas Movies?