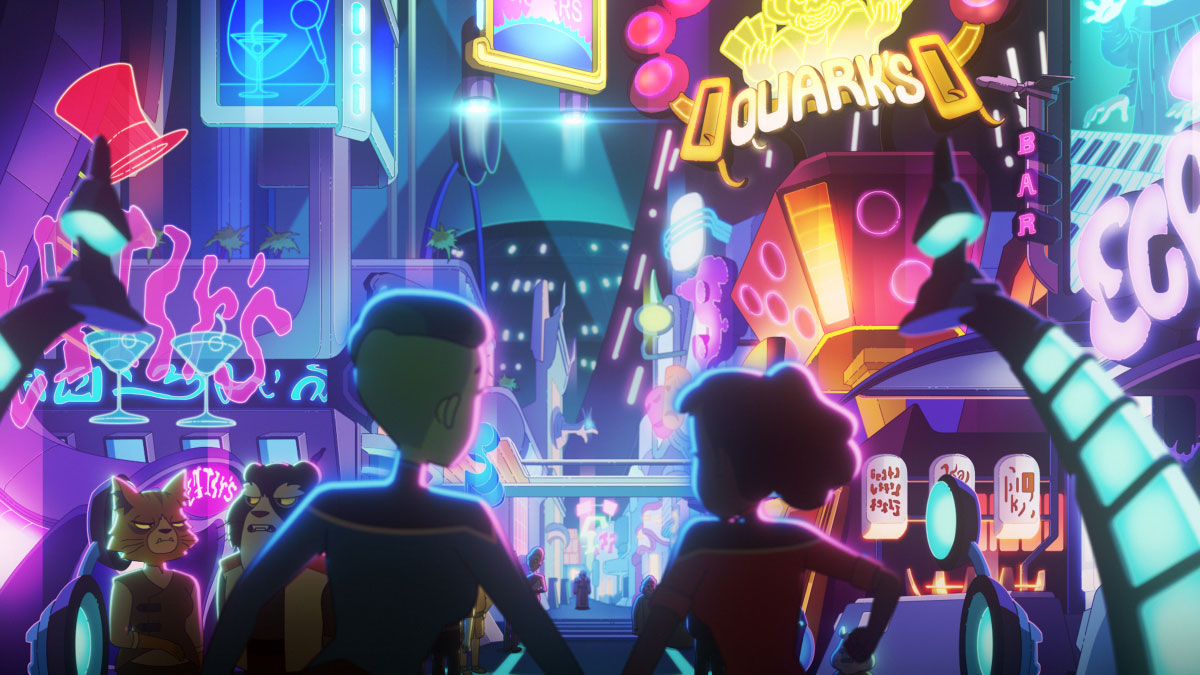 Boimler can’t use the replicator

Mariner mentions that the upgraded security on the Cerritos means is responsible for Boimler being locked out of the replicators. This vaguely references the DS9 episode “Inquisition” and the Voyager episode “Counterpoint,” when it’s made clear people who are confined to quarters (i.e. security risks) can’t use the replicator.

This is Mariner’s second use of the term “sci-fi” in Season 2 of Lower Decks. The terms “science fiction” and “sci-fi” are used sparingly in the Trek franchise. In Picard Season 1, Jean-Luc admitted that he “didn’t get” science fiction, after Jurati was looking at this copy of Isaac Asimov’s The Complete Robot. Interestingly enough, the term “sci-fi” was still in its infancy in the 1960s, and was often thought of as a pejorative term by more serious science fiction enthusiasts who preferred the term “SF.” To this day, “SF” tends to denote print science fiction (or speculative fiction) while sci-fi usually refers to filmed science fiction. “Sci-fi” itself is almost a double portmanteau insofar as it’s both an abbreviation of “science fiction” and reference to “hi-fi,” meaning “high fidelity.” Mariner’s use of “sci-fi” in Lower Decks could suggest the word has a slightly different implied meaning in the 24th century than it does in the 20th or 21st.

The biggest running joke of this episode is easily the notion that Shaxs has come back to life and there is little to no explanation as to how. However, Mariner and Boimler do list several in a later scene, including:

“The Creator of Fair Haven and Captain Proton himself!”

Boimler mentions two holodeck programs written by Tom Paris, which were huge during the run of VOY. (Yeah, we’re calling it that now, it really does save time.) “Fair Haven,” was designated holoprogram “Paris042,” and appeared in the episodes “Fair Haven,” and “Spirit Folk.” The pulpy, black-and-white holoprogram appears in ten episodes of VOY, and is essentially a blend of Flash Gordon and Buck Rogers.

“Is he still a salamander?”

Boimler makes it clear that Tom Paris was only briefly turned into a salamander-like creature, because he was the first “first human to break the transwarp barrier.” This referenced the VOY episode “Threshold,” in which Janeway AND Paris become “salamanders.” It is generally considered to be the worst VOY episode of all time, and often, one of the worst Star Trek’s ever, too. But, true fans love it because of that fact. Also, this is the second time Lower Decks has referenced “Threshold.” In “Much Ado About Boimler,” Tendi and Boimler met one of those salamander-looking creatures on route to “the Farm.”

This references the exact same location from the TNG episodes “Unification I” and “Unification II.” It’s basically a big junk yard.

“This stuff always happens, even on VOY!”

This probably references the fact that Harry Kim was killed and replaced by his exact duplicate from another dimension in the VOY episode “Deadlock.”

It appears by the time of Lower Decks Season 2 (roughly 2381) Quark seems to have a franchise of bars. On Qualor, we see a sign for “Quark’s Bar,” which seems to reference both Quark on DS9, but also the Quark’s Bar we saw on Freecloud in Picard’s “Stardust City Rag.”

In the same scene, we see a sign for the “Zebulon Sisters,” who are a musical group Boimler and Mariner went nuts for in the Lower Decks Season 1 episode, “Terminal Provocations.”

Tendi explains the Catian’s need to be “intimate once a year,” and compares it a “like a Vulcan on Pon Farr,” which of course, references the seven-year mating cycle for Vulcans, which originates in the TOS episode “Amok Time.”

Mariner says she once “ran over Worf’s Mek’leth” on Deep Space 9. This was the curved weapon Worf started using in DS9’s “The Way of the Warrior,” and prominently in First Contact.

When Tendi asks Mariner what she was doing on DS9, she says, “I served there! Back before I was on the Quito.” This would put Mariner serving on DS9 sometime after 2372 (Worf arrives on DS9 in “The Way of the Warrior”), but before 2375 (Worf leaves DS9 in “What You Leave Behind.”) Either way, it’s between nine and six years before Lower Decks Season 2. Mariner also says that the Cerritos is “like my fifth” ship. This means that the dating of Mariner’s flashback scene on DS9 in the episode “Cupid’s Errant Arrow,” is even more confusing.

Mariner knows a “fixer” at Bonestell, and when they arrive, we’re told this is “Starbase Earhart.” All of this references the TNG episode “Tapestry,” in which we learned a young Jean-Luc Picard hung out on this planet before “shipping out.” Bonetell is the bar and recreation area of Starbase Earhart. Tendi and Mariner playing dom-jot with the Nausicaans also references “Tapestry.”

“I’m not even that kind of Orion”

When Mariner suggests that Tendi use her pheromones, Tendi objects, saying “I’m not even that kind of Orion.” This references (mostly) the Enterprise episode “Bound,” in which we learn that the Orion “slave women,” are actually not slaves, but secretly manipulating all the males in their society through pheromones. The famous Orion pheromones originate in the TOS pilot episode “The Cage.” Tendi later mentions the “stigmas” around Orions, and that it was “hard to get into the academy.” Taken with the “not that kind of Orion ” reference, this could also reference the film Star Trek 2009, in which Uhura is roommates with an Orion, Gaila (Rachel Nichols) you didn’t appear to that kind of Orion, either.

“Not that kind of Orion,” may also reference the Animated Series episode “The Pirates of Orion,” in which everyone randomly pronounces it “ORE-E-AYN” (rather than “OH-RYE-AN”) for no clear reason.

Robert Duncan McNeill reprises his role as Tom Paris, for the first time since the final episode of VOY, “Endgame.” Paris is rocking a post-First Contact style uniform, which is also something new, since the VOY crew were stuck in the old duds while in the Delta Quadrant.

In Rutherford’s nightmare, there are a multitude of Shaxses, from across the multiverse of imagination. This scene is so densely packed with Easter eggs, it’s possible to miss several. Here’s what we caught.

Mariner has no idea Tendi’s first name is “D’Vana,” and assumes she has just one name “like Odo,” in reference to everyone’s favorite shapeshifting constable from DS9, Odo. Tendi says her first name in the very first episode of Lower Decks, “Second Contact,” and we see her name signed on the screen in Mariner’s holodeck program in “Crisis Point.” But, it’s possible, it’s never been spoken out loud in a scene that Mariner has been in. This joke could reference the idea that Sulu and Uhura both did not have first names spoken on screen until much later in canon. In fact, in Star Trek 2009, it’s a running joke that Kirk does not know Uhura’s first name until Spock calls her Nyota.

While crawling through the Jefferies Tubes, Boimler says “Nobody knows the Cerritos like Bradward Boimler!” And then he gets smacked in the head by a closing hatch. This probably references Scotty in The Final Frontier, when he says “I know this ship like the back of my hand,” and then runs into a bulkhead and passes out.

Shaxs refers to Rutherford as “Baby Bear.” This references the Season 1 episode “Envoys,” in which Rutherford had briefly considered a job in security. At that point, all the security officers called themselves, “bears” and Rutherford “Baby Bear.” When Shaxs saved Rutherford in “No Small Parts,” he bellowed, “I’ve got you Baby Bear!”

The Kazon were the primary villains in VOY’s first few seasons, and yes, did kind of look like that. Nobody misses them.

Did you get your bowl signed by Chakotay or whatever

Mariner teases Boimler at the end of the episode, intentionally pretending like she doesn’t know the difference between Chakotay and Tom Paris. Interestingly enough, both Tom Paris and Chakotay had criminal records before getting stranded in the Delta Quadrant. Seems like they’re doing fine upon the return of VOY to the Alpha Quadrant.

And, if this episode is any indication, it feels like the references to VOY are just getting started on this show.

The Uncanny Parallels Between The Beatles: Get Back and A Hard Day’s Night
What GTA 6 Should Learn From Vice City
Doctor Who: Flux Episode 5 Review – Survivors of the Flux
New on Netflix: December 2021 Releases
New Star Wars Character Confirmed for Ahsoka Series