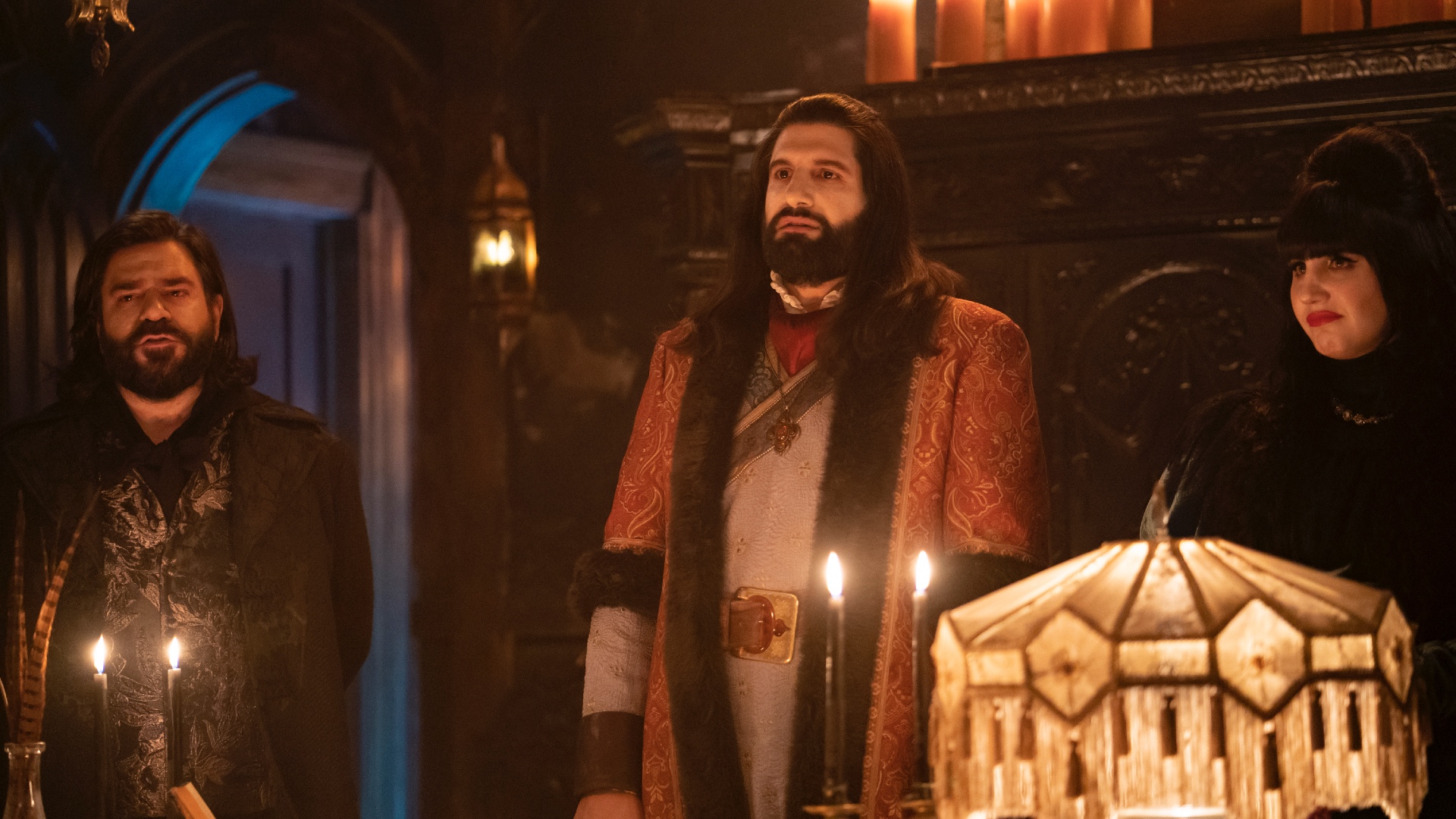 This is a spoiler-free review.

What We Do in the Shadows season 3 brings new duties, old flames, sad farewells, and happy endings – though those are mainly enjoyed by Laszlo Cravensworth (Matt Berry), who discovers a treasure trove of the rarest pornography in the known world. There will also be a trip for Guillermo (Harvey Guillén) to the three corners of the earth, which Nandor the Relentless (Kayvan Novak) will learn is round, therefore having no corners, but also not held up on the shoulders of four elephants. The mysterious and mesmerizing Nadja (Natasia Demetriou) continues to bare revelations, though her most memorable is when she reveals herself to a Rat Pack performance act playing the casinos at Atlantic City.

The vampires of Staten Island are moving up in the ranks, following the theatrical demise of the Vampiric Council which closed the curtain on last season. All the better to hide from what may very well be an incursion from the remaining vampires of the Tri-State area, but first they have to deal with a hunter in their midst. The ever-thoughtful familiar Guillermo took out the entire bloodsucking leadership in defense of his masters, revealing himself to be a dangerous asset to keep on the books and pay off them.

The season begins with an episode titled “The Prisoner,” and most of the discussion centers on whether to keep the episodic title character alive. To be honest, even the vampires’ most arduous attempts to do so are feeble enough to kill him through salmonella or e coli, as he is given uncooked packs of grocery chicken parts for sustenance. On one hand, Guillermo broke one of the most talked-about vampire codes: don’t kill vampires. It comes up in every conversation, so it’s a pretty big rule. However, what with all the angry vampires who might be seeking vengeance on the Staten Island quartet, a vampire slayer, “with the stakes and the reflexes and all that,” in the house might prove useful.

Based on the feature film by Jemaine Clement and Taika Waititi, What We Do in the Shadows mines the modern trials, tribulations and occasional triumphs of a trio of bloodsucking vampires, and one who feeds on the energy of others. Colin Robinson will turn 100 years old this year, and he spends much of the season tracking down his origin. So much is known about the traditional vampire, but energy vampires are virtually non-existent in the ancient texts, scrolls and shrouds. It could be that they were so annoying they were ignored by historians with better things to do than listen to their endless, draining, conversations.

Nandor will be hit with an eternal-life crisis this season. His entire world-view will be altered by one, interminable chat with Colin Robinson, and will follow his pondering of life as an immortal bachelor with 37 ex-wives. He will contemplate this in the episode “The Cloak of Duplication,” when he tries to kindle the interest of a fitness spa worker, and “Gail,” where he dances to music of the Silver Bullet Band.

According to the advance press, the vampires will be “elevated to a new level of power” this season. An early trailer spoiled that the immortal roommates get promoted to the Vampiric Council. While this might be an error because vampires, by definition, don’t follow Human Resources protocol, WWDITS executive producer and writer Paul Simms told the TCA journalists “It also just seemed funny to us that these this group of vampires, who can’t even really get along with each other, are given a position of power where they’re sort of making judgments on other vampires and struggling with each other.” Executive producer Stefani Robinson added “It just felt like a natural progression from where we left off last season.”

With great power comes great responsibility, which eternal vampires spend lifetimes learning to shirk. “Laszlo says he did not become a vampire to be a paper pusher and doesn’t give a shit about official vampire organizations,” Simms said. “Nadja is a little more bloodthirsty and wants to rule with an iron fist.” The gifted vampire shows her supernatural hunger for power early in the season when she gets the other vampires to count Nadja’s doll as a full-fledged roommate with voting rights. “She’s got so much character and she’s a great actress and she’s played by me,” Natasia Demetriou said.

The vampires will also “encounter the vampire from which all vampires have descended, a tempting Siren, gargoyles, werewolf kickball, wellness cults, and supernatural curiosities galore,” according to the advance press. But viewers will be gifted with unbelievable shows of strength, irredeemable sins of nature, and greater freedom in language. Not only does Nadja’s doll speak Greek, along with Guillermo’s Spanish and whatever Nandor’s native tongue is, but Laszlo learns the cursive.

What We Do in the Shadows season 3 brings mirth and mayhem in equal measure. The humor is not limited to dialogue and physical comedy, and moves at a supernatural pace. The stakes are always high, the jokes are not afraid to go low, and Laszlo thinks everyone should go down on a count, or countess, or even an old friend whose daughter works in marketing. Each episode satisfies a hunger, and slakes a thirst.

MST3K Season 13: All The Movies, Details, and Release Date
New Star Wars Character Confirmed for Ahsoka Series
The Uncanny Parallels Between The Beatles: Get Back and A Hard Day’s Night
New on Netflix: December 2021 Releases
Top New YA Books in December 2021