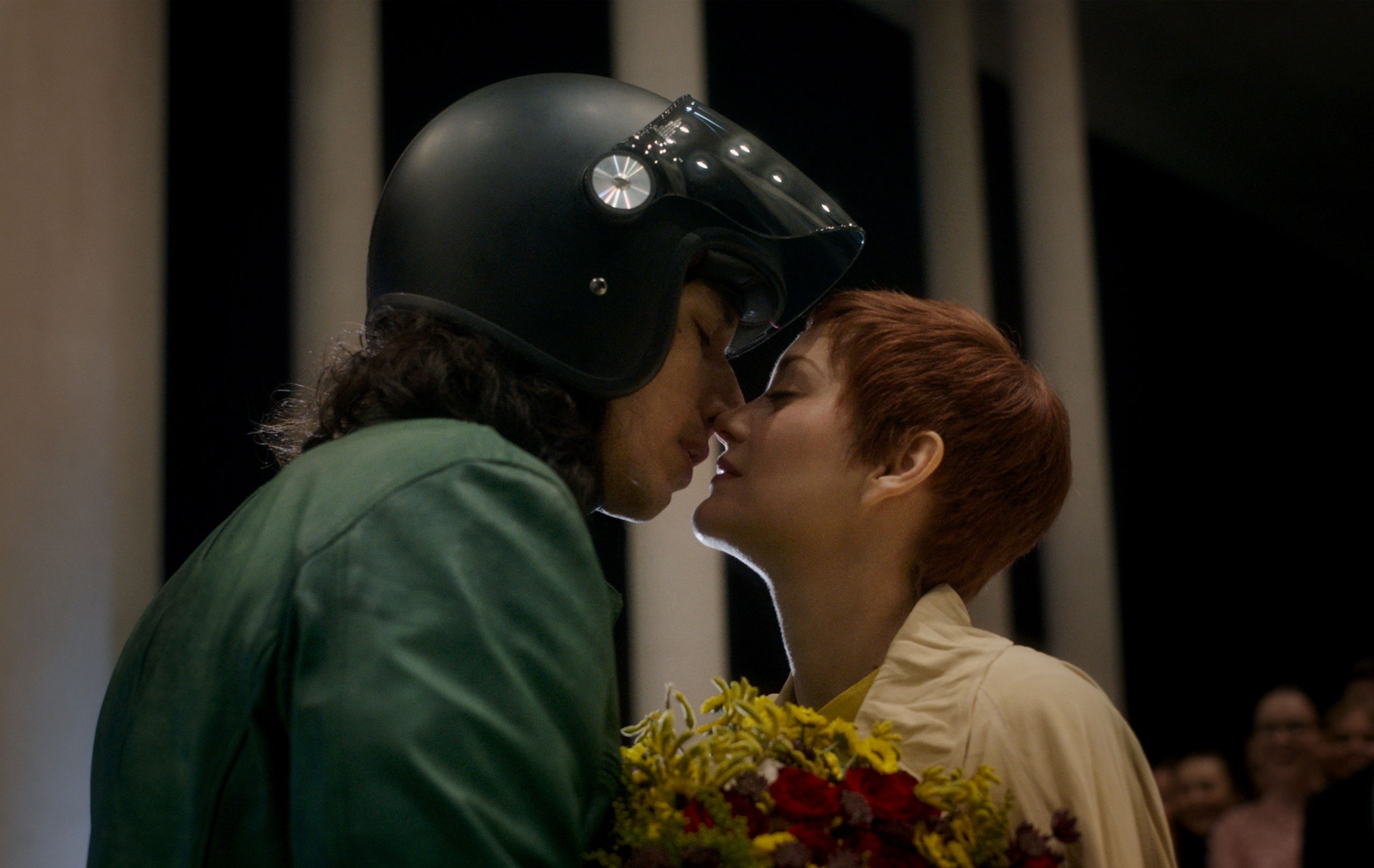 Ron and Russell Mael, otherwise known as the synth heavy band Sparks, are in the midst of a career renaissance. They’ve been producing music for close to 50 years now, and the recent documentary into their history directed by Edgar Wright, The Sparks Brothers, has introduced the band’s work to a whole new generation.

Now they’ve teamed up with acclaimed French director Leos Carax (Holy Motors) for his first English language film, a surreal musical wonder called Annette. The story of an opera singer (Marion Cotillard) and a famous comedian (Adam Driver), Annette explores the many of today’s hot button issues in the world of fame, desire, and how we treat our children.

We had the chance to catch up again with Ron and Russell to discuss the evolution of Annette from its genesis to the final product.

This was your story to start with. When Leos came onboard, did you have a script at that point? Or did you all work on it together?

Russell: Well, the script in our minds was always the music. Because the music carries all of the dialogue of the film. So there was never a traditional screenplay in terms of 120 pages written in screenplay form. It was presented to Leos in the start as a CD with 42 pieces of music that had dialogue with it and lyrics sheets, which was the dialogue for the film, but it also gave some brief stage directions. For instance, for a scene on the boat it would say, “it storms at night; Henry and Ann Waltz in the storm.” In our minds, that’s a screenplay and Leos never had a problem to work from that. Later, after the fact, to be able to give the actors something tangible in their hands to see, a formal screenplay was created from our original version.

So, with so many songs for Leos to choose from, was the full thematic journey in those songs? Or did it form more as you three picked the songs that were used in the end?

Ron: It was pretty set even nine years ago. It’s just that Leos made it clear that he did want some personal participation in the crafting of some of the lyrics. But the basis of it is that most of the pieces were there that long ago. There were several pieces that were added at his request. There’s a final song called “The Abyss” that wasn’t in our original version. There’s a piece towards the middle called “The Girl from the Middle of Nowhere” where the character of Ann is singing about her early days and how she developed into who she is in the present day. He made the request for those pieces.

But they were all kind of folded into the original project. It wasn’t taking the original idea and tearing it all down. As a framework, it really was that original group of pieces and then extending and elaborating on it a bit. Leos felt that, maybe since our original idea was for it to be theatrical, maybe some of the characters weren’t as well formed as they would need to be in a film. So, that was one thing in particular in Adam’s character. It was more developed than what it may have originally been.

I don’t want to go into any specifics because I think everyone’s done a great job keeping what I guess I’ll call the big surprise of the film under wraps. But was the character of Annette meant to be like that the entire time? Or was it again, something that as Leos came on, it became more formed? Especially since there is an obvious allegory being made between her name and what we see.

Russell: It was in our original version for budgetary reasons. We were going to tour with it, but we didn’t know how to represent such a young child. So, we were going to go down to Toys ‘R’ Us and buy a doll and stick it in a baby carriage and have nice lighting and hopefully the audience would believe that it’s a baby that can sing. When Leos came aboard, coincidentally, he wanted to represent the child the way that it is in the movie.

I don’t know if we should give way any more than that. But the way the child is represented in the movie is Leos’ idea, and we think it was amazing to do that because it gave a whole other layer to the film and the way that the actors treat that character like it’s a real flesh and blood child…it’s really amazing. There’s never a question that that’s not a real child, even when you see that to the contrary it’s not. So, we’re happy that Leos chose to do something as extreme as that.

For people who may not know, this was not your first attempt at bringing a musical to life. You were working at one time with Tim Burton to make Mai, The Psychic Girl. Did any of the thematic journeys from that make it into this? Was there any bleed over, or is that still its own separate piece?

Ron: It’s more that from a technical standpoint, when we worked on Mai, The Psychic Girl in the early ’90s, we came up with a way to incorporate dialogue into a musical context that always wasn’t traditional in making a song that’s sung/spoke in a musical background. The technical things are carried over into Annette, where stylistically but not thematically, it has a similar feel to our first attempts at a film musical.

Obviously, I wouldn’t say that either of you are anything like the character of Henry McHenry in terms of how he would deal with things in life. But I also wonder if there are parts of these characters that maybe were built on pieces of you? I mean, Ron, a lot of what you do is like being a stand-up comedian where your lyrics are meant to satirize themes you want to focus on. So, I’m wondering how much of you are actually in some of the characters?

Ron: Well, I think just the idea of challenging an audience– obviously the character of Henry McHenry in the film challenges the audience in much more extreme ways than either of us would ever do. But, the idea of doing something so extreme that you’re almost pushing the audience to a point of saying, I don’t expect this anymore… I would like to think that maybe something as self destructive as that is something that we don’t have in us, but that we just wrote into the character.

We tried to come up with two separate and opposite ways of having the two main characters express themselves in a musical way. Obviously, Ann is an opera singer, so that one is kind of a given, but it seemed interesting to try and figure out a way for a stand-up comic to be represented in some sort of musical context in a film musical.

Obviously, this has no bearing on the film itself, but I’m wondering if you laughed at a little bit of the irony of Marion Cotillard being cast in the film since the role that shot her to fame in the world’s eyes is when she played Edith Piaf, and of course you have the song, “Edith Piaf Said It Better Than Me.” Which, by the way, I don’t want this to sound like a backhanded compliment, but nobody this far into their career should be writing a song that good.

Russell: [Laughter] Thank you, you’re kind. Yeah, it is ironic that it Leos’ choice of casting, which we were really incredibly happy about. We love what Marion did and how she portrayed the character in the film. So we’re really ecstatic that she was chosen. As far as having songs at this point in our career…it kind of relates to doing a movie/musical at this point in our career, too. No one should have a film opening the Cannes Film Festival after having 25 albums while at times going under the radar. Nothing in our career is maybe the way it should be.

That must be the great thing about the way this all was laid out. It’s almost perfect that The Sparks Brothers documentary came out first. Now some people who didn’t know about you beforehand, can go into Annette with a different eye.

Russell: The timing worked out really well. We were pleasantly surprised because we weren’t sure whether two films was a good idea at the same time. Maybe they should be spread out, but it’s worked out really well with the documentary that we love, that Edgar Wright has done. We’re just so happy that it preceded this by a little bit, that it told our whole story and that people can go, like you mentioned, they can go into Annette knowing a little bit more about where it’s coming from.

Annette is streaming now on Amazon Prime Video in the US. It will release in the UK on Sept. 3 on MUBI.

Top New Science Fiction Books in December 2021
The Uncanny Parallels Between The Beatles: Get Back and A Hard Day’s Night
What GTA 6 Should Learn From Vice City
DC League of Super-Pets – Official Trailer | DC
Doctor Who: Flux Episode 5 Review – Survivors of the Flux