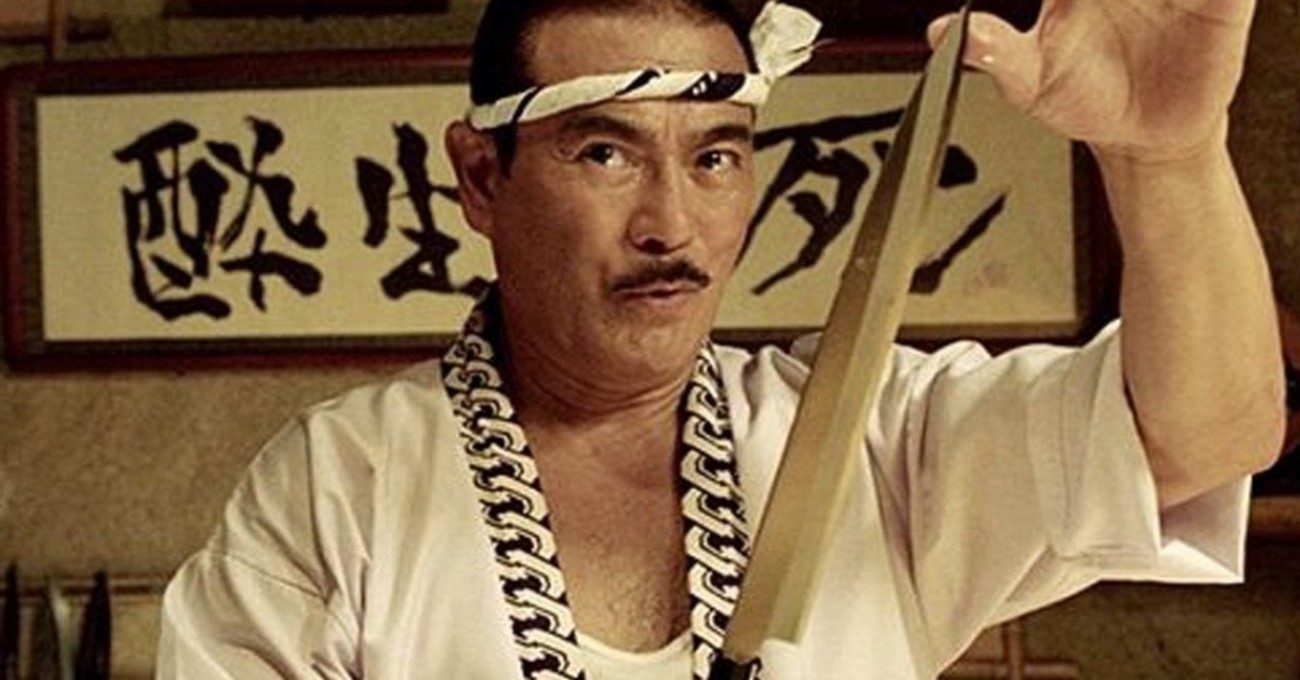 On August 19, 2021, legendary Japanese actor Sonny Chiba succumbed to complications from Covid-19. He was 82. If you don’t know Chiba, he was a pioneering martial arts movie stars and a genuine master of the martial arts. Long before Bruce Lee, there was Sonny Chiba.

Chiba was his stage name. He was born as Sadaho Maeda and adopted “Chiba” after Japan’s Chiba prefecture where he grew up.  His Japanese stage name was Shinichi Chiba, but he was known internationally as Sonny.

Chiba was a natural athlete and a contender for Japan’s Olympic gymnastics team until he was sidelined by an injury. He pivoted to study Karate under the venerated master Mas Oyama, a hardened full-contact fighter who was famous for killing bulls with his bare hands. Chiba went on to earn black belts in several schools of Karate, as well as Judo, Kendo, and Ninjitsu.

In the 60s, Chiba began his acting career in television, specifically in the costumed superhero genre known as tokusatsu (think Ultraman or Mighty Morphin Power Rangers). From there, he jumped to crime thriller movies and quickly established himself as an action star. In 1970, he formed the Japan Action Club, one of the first groups dedicated to stunt people and martial arts actors. His first explicitly martial arts film part was in 1973 in a film called Karate Kiba.

Chiba is credited with over 200 roles, predominantly in Japanese martial arts films, however he’s appeared in a few Hollywood projects. While he’s known in the west for his martial arts performances, he’s delivered a wide range of characters, mostly leaning towards grindhouse cinema. Since 1959, Chiba has delivered several projects almost every year. The bulk of his work over the last two decades were direct-to-video projects. His final film Bond of Justice: Kizuna, a Yakuza revenge tale, is in post-production and is slated to be released later this year.

In honor of Sonny Chiba’s illustrious career, Den of Geek has cherry-picked several of his best and most interesting films.

Since Chiba got his start in tokusatsu, we had to include at least one title from this uniquely Japanese genre, and this one is truly vintage, shot in black and white. Chiba plays an astronomer with a secret superhero identity. He transforms into Space Chief, a caped crusader clad in a metal helmet and sunglasses who is a friend to little children. Meanwhile, the titular Neptune Men are dressed in classic 1950s-style alien costumes, all silvery with ridiculous bucket-like helmets. Yes, this is one of those films that’s so incredibly bad that it’s good, so much so that it caught the attention of Mystery Science Theater 3000, which is the best way to watch it.

Chiba plays the antihero Teri Tsurugi, whose nickname is “Real mean bastard.” It’s a gratuitously violent film for the time, unapologetically so with Tsurugi ripping out throats, breaking necks with wild abandon, and selling women as sex slaves, often while shirtless to show off his macho barrel chest. When The Street Fighter was released in the U.S., it was the first film to get an X rating for violence.

This is not a Mystery Science Theater film, but it should be. Wolf Guy is a hard-to-find cult film where Chiba plays Akira Inugami, the last survivor of a clan of werewolves who uses his lupine powers to solve crimes. However, when the moon triggers him (or a comet or the birth of a two-headed calf – Inugami is easily triggered), Inugami doesn’t transform into a hairy beast. He just gets super wolf powers. It’s a strange film, not for everyone except for those who love psychotropic Japanese cinema.

Note that the Japanese title of this film is Urufugai and that’s a phonetic translation of “wolf guy.” “Urufu” is “wolf’ and “gai” is “guy.” This is an example of wasei-eigo, literally “Japanese-made English.”  “Anime” is another wasei-eigo term, derived from the English word “animation.” The Japanese title of Karate Kiba is Bodigaado Kiba – Bodigaado is “Bodyguard.”

Karate Bullfighter aka Champion of Death (1975)

Chiba played his illustrious sensei Masutatsu “Mas” Oyama in a film trilogy based on a biographical manga titled Karate Baka Ichidai (Karate fanatic) by Ikki Kajiwara that began in 1971 and ran until 1977. Karate Bullfighter was the first. Karate Bearfighter came out the same year and Karate for Life was two years later. There’s also an anime version of the manga that came out in 1973. The manga and anime are credited with stimulating a Karate trend in Japan.

Oyama Sensei had cameos in the first two films. Oyama was Korean, born in Korea while it was under Japanese rule. His birth name was Choi Yeong-eui, but he changed his name after immigrating to Japan in 1938. He died of lung cancer in 1994.

Based on the popular manga series, launched in 1968 and still running to today, Golgo 13 is Japan’s answer to James Bond. He’s an international assassin, a crack shot sniper with Karate chops. Chiba plays Golgo 13 on a mission to sanction a Hong Kong crime boss. This is a classic ’70s grindhouse film, and Chiba captures Golgo 13’s cold-blooded ruthlessness with his signature vicious aplomb.

In the wake of Star Wars, Message from Space was a blatant rip-off with a tokusatsu bent. It had Japan’s biggest budget at the time, but you wouldn’t know it now. It’s horribly dated with cheesy special effects, another “so bad it’s good” movie — Mystery Science Theater could have a field day with Chiba’s filmography. Chiba and his street fighting counterpart Etsuko Shihomi shared top billing alongside Vic Morrow.

We had to include one of Chiba’s period films, and Hunter in the Dark is a fine example of the samurai genre. Led by one of the greatest samurai film actors of all, Tatsuya Nakadai, and directed by the influential Hideo Gosha, Chiba is in a supporting role as Shimoguni Samon. When the grindhouse films get too much, this is a welcomed change — an unsung masterpiece by some of the leaders of the samurai genre.

The Storm Riders was another gamechanger, an epic Chinese fantasy martial arts film based on the manhua by Ma Wing-shing (manhua is Chinese comics like manga is Japanese comics). Starring Ekin Cheng and Aaron Kwok, this special effects-driven film won many accolades at Asian film festivals and ushered in a new era for the period martial arts fantasy film genre known as wuxia. Chiba played the villain, Lord Conqueror.

Quentin Tarantino cast Chiba as Hattori Hanzo, the retired swordmaker and sushi chef who created the Bride’s (Uma Thurman) katana. It was an homage role. Tarantino was paying respects to Chiba as a longtime fan. He also inserted easter eggs honoring Chiba’s work in Pulp Fiction. When Jules Winnfield (Samuel L. Jackson) claims to quote Ezekiel 25:17 – “The path of the righteous man…” – it’s a reference to the opening of Karate Kiba, which paraphrases the same passage in the American version.

Chiba played Kamata, a yakuza boss and the father of the films main rival. Like with Kill Bill, Chiba’s Hollywood roles are the most cited in his obituaries, but both were minor in comparison to his vast and diverse body of work.

A prolific actor who did most of his own stunts long before Jackie Chan claimed to do so, Chiba was a cinematic maverick who attacked moviemaking with an unprecedented and unapologetic sense of ultraviolence. While many of his films seem dated and low brow now, his impact on action film is undeniable and his passing marks an incalculable loss to the genre.