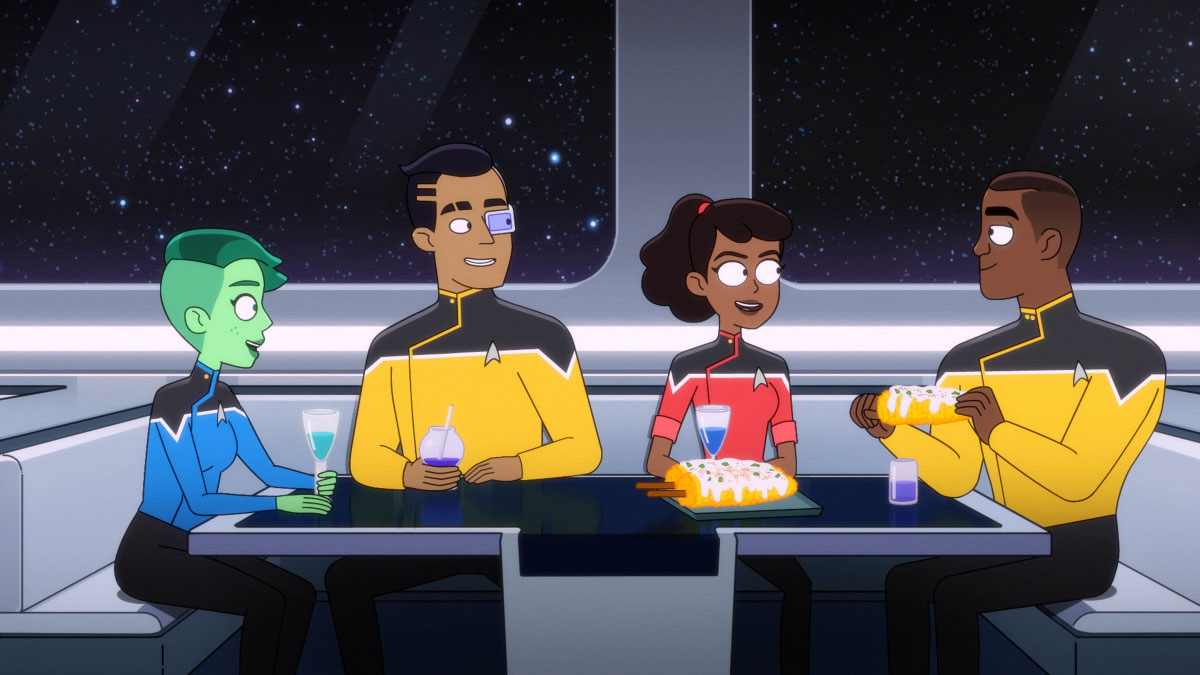 At this point, asking whether or not Lower Decks is “real Star Trek” is nuts. Not only does the series capture the warm and fuzzy TNG-vibe nearly perfectly, it also talks about the meaning of Star Trek, quite a bit. In the Season 2 debut, Lower Decks examined the old TOS trope of a mortal suddenly having “god-like” powers, and looked at what that meant from at least three different ways, in three different storylines. But this week, Lower Decks is being a bit tricker. If we think of each episode of this series as like a treatise on the nature of a certain Star Trek concept, “Kayshon, His Eyes Open,” was all about competing definitions of what it means to be good at your job in Starfleet. And sometimes, when that happens, you end-up meeting your double.

Although the introduction of a Tamarian crewmber named Kayshon hogs the title of the episode, that’s a bit misleading. Yes, Kayshon is from the same alien race as captain Dathon in the wonderful TNG episode “Darmok,” but in this episode, Kayshon isn’t really that big of a deal. You could argue that maybe the Tamarian’s exclusively analogy-based language is a larger metaphor for Star Trek itself, but that doesn’t really seem to be what the episode is going for here. Kayshon is a feature of the episode, but not its subject. Just like “Much Ado About Boimler” in Season 1 was about many other things other than Boimler, this episode is mostly about Mariner getting called out for being too reckless again, and the story of how Boimler himself makes it back to the Cerritos.

While on a mission to help catalogue a “Collector’s Ship,” Mariner, Tendi, Rutherford and Jet, all get trapped by some killer security systems pretty quickly. In Jet, Mariner sees a rival for who will be the dominant “cool” member of the group, and so, she predictably acts like she’s in charge until things go horribly wrong. What makes this work is that Jet is her equal, and is in no way influenced by Mariner’s bullshit. But, unlike Captain Ramsey in Season 1, Mariner can connect with Jet by the end of the episode, because she figures out they actually have more in common than they don’t. In short, although the show is relying on the gimmick of Mariner screwing something up again by being too arrogant, it totally works because the context is pretty different than last season.

But the real brilliance of the episode is all about Boimler’s adventures on the USS Titan, and how “getting transporter cloned” sends him back to the USS Cerritos. While on an undercover mission with some of the Ttian’s resident asskickers, Boimler finds himself defending the softer aspects of Next Generation lore. When his Titan shipmates mock the fact that the Enterprise-D used to have “a regular string quartet,” Boimler sticks up for “the D,” and everything that crew was all about. By the end of the episode, Boimler realizes that the kind of missions that the Titan crew goes on aren’t exactly why he signed up to be in Starfleet, and says it outloud. At the end of the episode, when his old buddies on the Cerritos ask him what the Titan was like, Boimler says: “It was a bunch of complex characters thrown into heavily serialized battles, which always ended in mind-blowing twist which made me question the basic tenets of my reality.”

On some level, you could take this as Lower Decks poking fun at the season-long plot structures of its sister shows Discovery or Picard. The missions of the Cerritos are closer in feeling to what happened on the Enterprise-D than anything happening on the newer shows. (Though Strange New Worlds might be a throwback, too.) The point is, Lower Decks continues to give voice to “old school” Star Trek, which, in this case, means 1990s Trek. At the end of the episode, Boimler’s Titan friends call him “Enterprise,” in a kind of teasing, friendly way. Boimler fits into a different era of Starfleet, maybe one before the Dominion War happened, and certainly not the Starfleet we saw in Picard Season 1.

But, what Lower Decks is saying with this episode is that maybe all versions of Starfleet can exist alongside each other. Yes, sometimes Starfleet is all covert-ops and phasering, like in the movie Into Darkness or like half of DS9. But maybe, sometimes, things are more like the goofy TNG episode “Second Chances,” in which Riker was infamously duplicated.

Toward the end episode, when it’s revealed there are now two Boimlers, one of the Boimler’s says “Wait, I’m the transporter clone, boo!” But, the bigger message here is much smarter. They are both the real Boimler. Both versions of Starfleet can coexist. And, it turns out, Boimler can want to be part of both crews. Each one is the genuine Boimler, proving that the definition of “going boldly” can mean different things, even within the same person.

Top New Fantasy Books in December 2021
What GTA 6 Should Learn From Vice City
Lethal Weapon Is the Action Christmas Movie Die Hard Wishes It Was
Could She-Ra Come to Masters of the Universe: Revelation Season 2?
Legends of Tomorrow Season 4 Episode 5 Review & After Show