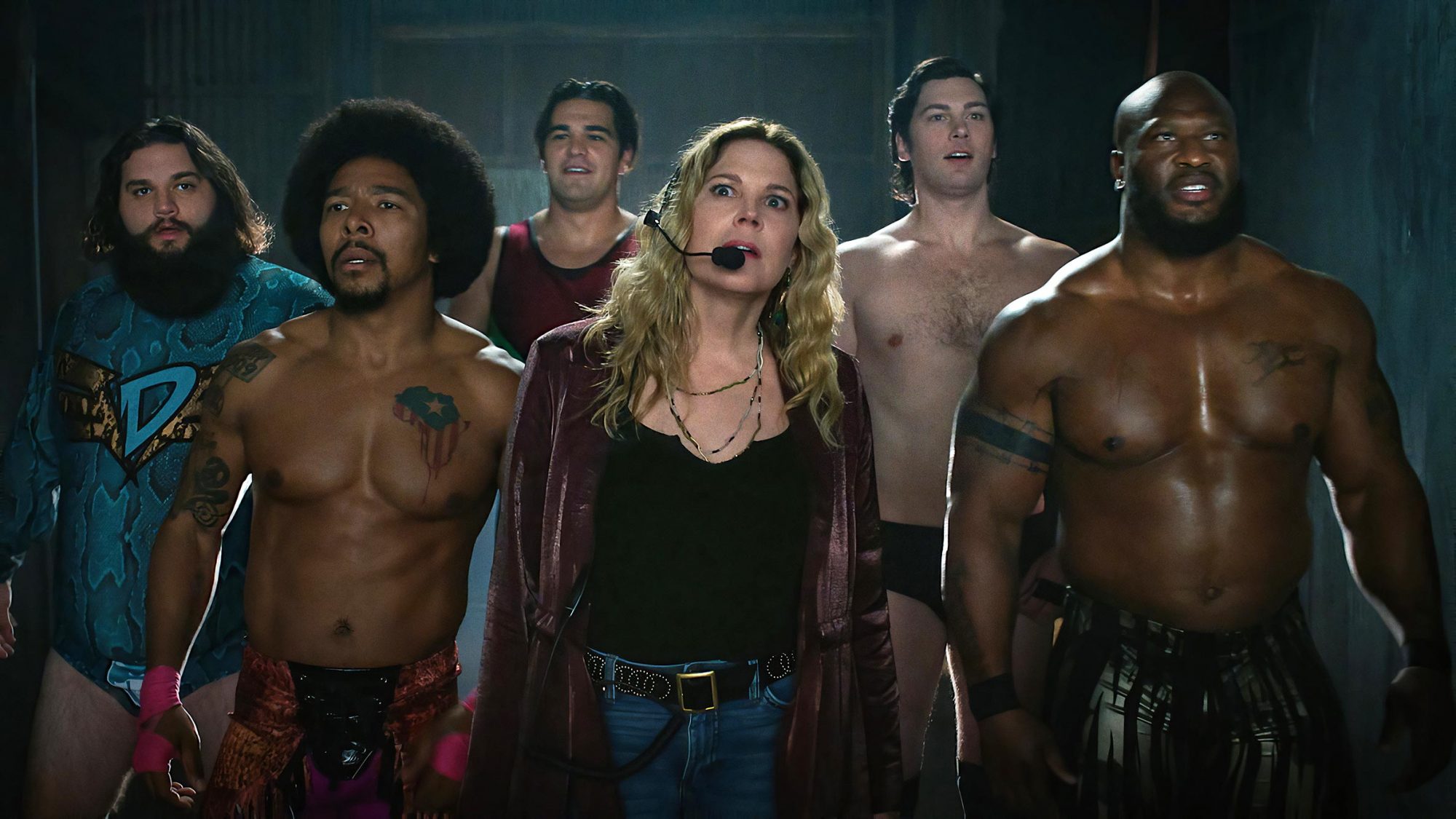 For a century old artform with history rooted in carnivals, vaudeville, and theater, professional wrestling is often not given the respect that it deserves. Mixing the melodrama of a soap opera with feats of strength and aggression, professional wrestling offers clear, concise storytelling escalated by death-defying stunt work and larger-than-life personalities. It’s predetermined, sure, but so is every scripted drama on television. The men and women who call themselves professional wrestlers risk injury or even death to tell heightened tales of good versus evil, feeding off live audience reactions. Watch televised wrestling during the pandemic, and you’ll realize how crucial the crowd participation is to the strange alchemy.

A setting that tells such fantastical, visceral stories with real-world stakes for the performers seems like a no-brainer for a scripted series. Heels, from creator Michael Waldron (Loki) and showrunner Mike O’Malley (Survivor’s Remorse), recognizes that the world of professional wrestling is ripe for exploration. Just as Friday Night Lights found the inherent drama in the world of high school football and translated that experience for even the most football agnostic, Heels similarly looks to immerse audiences in a world that they may not understand yet, but will surely wrap them in with its backstage politics, over-the-top characters, and high-flying action.

Heels centers on two brothers, Jack (Stephen Amell) and Ace (Alexander Ludwig) Spade, as they vie for supremacy over their father’s local Georgia wrestling promotion, Duffy Wrestling League. Though their behavior in the real-world is far from black and white, in the squared circle Jack is the heel, or the villain, and his younger brother Ace is the face, or hero. When a larger promotion comes sniffing around the DWL looking for talent, Jack “buries” his brother in a match, dashing his hopes for national stardom. The pair must work through their own issues while trying to fend off competition from another emerging Georgia wrestling promotion.

Besides the behind-the-scenes dust ups and realities of the physical cost, Heels gets a lot of heat out of its central family dynamic. Just as wrestling plays off elemental stories of good versus evil, storytellers have never been able to resist the ancient pull of warring brothers. Having written for shows like Rick and Morty and riffed on the fraternal relationship between Thor and Loki, Waldron understands how to portray dysfunctional families and sibling rivalries.

“The cool thing about writing about sibling rivalries is just the constant shifting of power dynamics,” Waldron tells Den of Geek. “And families are always changing. The family that one kid is born into is a totally different one than the one that another is born into. So, there’s resentment, there’s jealousy, there’s envy, there’s love, twisted kind of love and protectiveness. It’s an interesting thing to get to play with.”

O’Malley concurs. “I think what I love about the sibling relationship at the center of this thing is everyone understands inherently the tragedy of two brothers not loving one another, two brothers not connecting.”

While everyone can understand the heartbreaking nature of two siblings at odds, not everyone can wrap their heads around the whacky, wonderful world of wrestling.

“I hope if you’re a wrestling fan, you watch Heels and you’re pumped that you’re finally seeing a culture that’s felt maybe insular for a long time and that people haven’t totally understood,” Waldron says. “While at the same time, we’re trying to invite in a portion of the audience who doesn’t know anything about wrestling.”

“We want to honor this world and we want to show this hard work and the heart that goes into it. We also want to show the consequences of it. We also want to write a show and make a show that is universally appealing to people,” O’Malley adds. “And so, if my wife doesn’t like professional wrestling, but I want her to gain an appreciation for it and how it’s put together, we’ve got to construct a show that is not just about the wrestling.”

In the episodes that have been screened for critics, Heels toes that line quite well. The relationship between Jack and his wife Staci, played by Broadway actress Alison Luff, is so lived in and natural, while the tension between the battling brothers at the heart of the series feels familiar to anyone who’s ever butted heads with a sibling. However, wrestling fans will also get their fix.

Heels offers up plenty of body slams and suplexes, and lest anyone watching still feels like wrestling is fake, star Stephen Amell can tell you how very real the danger in the ring can be. Amell did loads of stunt work for the DC superhero series Arrow and has also gone toe-to-toe with wrestling superstars in the real world, but even that doesn’t make him immune from the risks that come between the ropes. On the first day of filming wrestling scenes, Amell suffered an injury.

“I was doing a movie called the Coast to Coast and got great results out of the first take,” Amell says. “I wanted a second crack at it, and I overshot it; landed straight up and down. I fractured my T10 and L1 vertebrae. I broke my back, and it was scary for a minute.”

The injury sounds frightening, but Amell says it was just a close call; after a few days with a specialist, he was back to filming matches.

“All of a sudden, a lot of people who invested a lot of time in the show had to put on their kid gloves to handle me,” Amell says. “I had to have some conversations with our showrunner, just to be like, ‘Listen, you guys sent me to a back specialist, he cleared me, I’m back, leave me alone.’ And, they got it. So, we’re all good now.”

After not watching much wrestling since his childhood, co-star Alexander Ludwig truly appreciates the rigors of the world of wrestling.

“I have such a tremendous respect for the sport and for what these men and women put themselves through on a regular basis,” Ludwig says. “It’s incredible the athleticism that’s required to sustain this sort of consistent abuse.”

As dangerous as things can get, wrestling isn’t all about carnage. It’s also about spectacle and pageantry. The colorful costumes, the cartoony gimmicks, it’s all a part of the package, and Heels understands this well. Chris Bauer, who plays former wrestler and talent scout Wild Bill Hancock, gets it too.

“I have a deep enthusiasm for the theatrical aspect of wrestling,” Bauer says.

On Heels, Bauer is lucky enough to work with his wife Laura Bauer, a costume designer, and together they ensure that Wild Bill always look authentic. Laura’s costumes capture the spirit of an indie wrestling promotion perfectly, and just like in any visual storytelling medium, a performer’s gear is an essential part of their presentation.

“Once we went to a show at the LA airport, a battle royal with Jake The Snake, Roddy Piper, Terry Funk; I would drag her to these things,” Bauer says. “So she was immersed in this world much more than probably any costume designer doing television out there. So she had a leg up. She also is loyal to the writer; she abides by the characters, and from the character the costume’s born.”

Though it can take a while to understand the jargon and rhythms in the world of sports entertainment, Heels is much more immediate; right from the pilot, the series knows exactly what it is, and only drills deeper into its world in a way that feels satisfying to old school marks and casual wrestling fans alike. Heels hooks you in with its layered characters, then slips in a right hook full of the wild world of wrestling. Once viewers get their first taste of Heels, that may not become a full-fledged wrestling fanatic, but they will want to see what the Spade brothers are going to do next.

15 Most Underrated Games of 2021
Spider-Man: Kirsten Dunst Would Play Mary Jane Again in the MCU
Top New YA Books in December 2021
The Walking Dead Season 10 Episode 7 “Open Your Eyes” | AfterBuzz TV
What GTA 6 Should Learn From Vice City