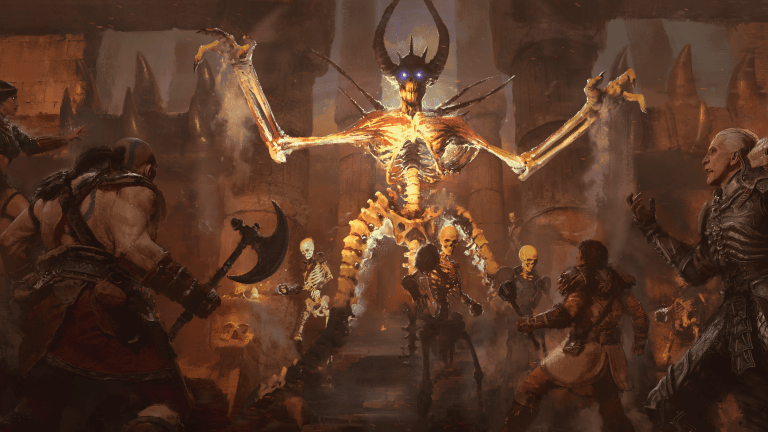 Diablo 2: Resurrected‘s recent Early Access Beta (which will be open to the public starting on August 20th) gave fans another chance to dive into this highly-anticipated remaster and see whether or not this game lives up to the hype or whether we’re looking at another Warcraft 3: Reforged situation.

It feels odd to invoke the name of Warcraft 3: Reforged when discussing Diablo 2: Resurrected (they’re different games made by different teams, after all), but the fact of the matter is that Warcraft 3: Reforged was supposed to be a surefire hit and turned out to be a disaster. That remaster (as well as everything else happening at Activision Blizzard at the moment) essentially ensured that Diablo 2: Resurrected will face increased scrutiny from fans.

So does this remaster live up to the considerable expectations it has acquired across the many years fans have been asking for it? Here are some of our early thoughts about the current state of the game:

Diablo 2 Is Still One of the Best RPGs Ever Made

I recently called Diablo 2 one of the best RPGs ever made, and my opinion on that subject hasn’t exactly changed over the last couple of months. If anything, I’d argue that Diablo 2 has aged better than many of the other great games of its era. While its longevity can certainly be attributed to the longevity of the “looter” genre itself, Diablo 2 was, is, and perhaps always will be a fundamentally enjoyable RPG experience.

We’re going to talk a lot about Diablo 2: Resurrected’s improvements and shortcomings, but you have to remember that we’re still talking about an all-time great game. If you haven’t played it, you really should. If you have played it, there’s a good chance you’ll want to play it again (though we’re going to dive into the subtleties of that suggestion here in a bit).

Then again, you could have said many of the same things about Warcraft 3 prior to the release of Warcraft 3: Reforged, which is, of course, the heart of this particular discussion. Thankfully, there are already some ways that Diablo 2: Resurrected is improving upon Warcraft 3: Reforged’s biggest mistakes…

There is a lot to say about what went wrong with Warcraft 3: Reforged (we certainly had a few things to say about the game in our review), but one of the biggest problems with that remaster was that its visuals and presentation didn’t come close to matching expectations. It just made a terrible first impression. Some of those expectations were based on assumptions fans had about how good Warcraft 3 should look in 2020, but most of them were based on Blizzard’s failed promises.

Thankfully, Diablo 2: Resurrected does not repeat that particular mistake. The game has some visual shortcomings, but this remaster gets most of the big things right in that department. The new designs look great, most of the new effects are incredible, and, in general, this is a brilliant example of how to upgrade a 21-year-old game’s visuals without compromising its core art style.

For that matter, Diablo 2: Resurrected features a ton of quality of life improvements that (in an interesting twist) are mostly optional. If you want to play Diablo 2 with automatic gold pickup, a clock, and more improvements meant to optimize the original experience, you can. If you want to play Diablo 2 just as it was (which also means enabling “legacy” visuals)…well, you kind of can, though that is where we start to run into a few problems…

In a perfect world, a video game remaster would allow you to play the original game exactly as it was. From there, you should also be able to enjoy an overhauled/improved version of that original experience or, even better, choose which upgrades you want to enable and which ones you do not.

While Diablo 2: Resurrected comes pretty close to achieving that lofty goal, it’s missing certain features from the original game that arguably shouldn’t be missing. While Blizzard has explained that the much-debated removal of the original game’s TCP/IP multiplayer features is due to possible security risks, other missing features like unique character names and the lack of a competitive “ladder” system at launch are much more questionable. Additional changes/improvements (like a slightly more “modern” chat system that often relays too much information) feel at odds with the spirit of the original game.

None of those problems are necessarily deal-breakers (and some, like the missing ladder system, will almost certainly be addressed soon), but just as we saw with Warcraft 3: Reforged, there are already some hardcore fans wondering if this is going to be the version of Diablo 2 that’s “for them.” Thankfully, Diablo 2 is generally in better shape now than Warcraft 3: Reforged was at any point.

While Diablo 2 was never officially released for consoles, Diablo 3 has since proven to be a surprisingly great console game. The quality of that sequel’s console port made it easy to assume that the console version of Diablo 2: Resurrected was going to be ready for primetime out of the gate. The reality of the situation so far, though, has proven to be much more complicated.

Diablo 2: Resurrected plays pretty well on a controller, but it’s really hard to ignore the fact that there are quite a few little things (such as minimap navigation and picking up items in a crowded looting area) that are just easier to manage with a mouse and keyboard. Furthermore, Diablo 2: Resurrected’s console ports currently lack custom lobbies, text chat, crossplay, and other control and communication niceties that really make you appreciate how smooth the basic PC experience is.

Again, some of those problems can be fixed in the near future, but other concerns (most notably the custom lobby and chat system issues) might be longer-term issues. Whether or not they can eventually be fixed may be less relevant at the moment than whether they can be fixed in time for the game’s launch. That brings us to our next point…

Diablo 2: Resurrected Is Not as Polished As It Needs to Be

We all know that most games suffer from bugs and other technical shortcomings at launch. It’s not great, but it’s pretty much where gaming is at right now. You should also never expect a game to be anywhere close to perfect during its early access/beta period, no matter how close to launch the game may be.

Having said that, Diablo 2: Resurrected clearly needs an extra layer of polish before it’s “ready.” The game crashed on me multiple times during the recent beta period, which I later learned from other players is actually a fairly common issue. There were also quite a few visual bugs that were relatively easy to overlook, but it’s really the game’s latency issues that worry me most at the moment. Such latency issues were essentially part of the original Diablo 2 experience, but I don’t exactly get nostalgic about hit registration delays.

Again, some of these bugs are much more impactful than others, but as we talked about with Back 4 Blood’s recent beta, it’s when you add a lot of these little problems together that you start to wonder whether or not the game’s currently scheduled September 23 release date gives the team enough time to make sure this is as close to optimal as possible. While a delay isn’t out of the question at this point, the game is arguably “close enough” to being ready to satisfy most players until the post-launch improvements start rolling out.

Diablo 2: Resurrected Is a Curious Blend of Blizzard’s Past and Present That is Burdened by Expectations

I ultimately feel that Diablo 2: Resurrected will be a very good game that offers pretty much what most people will want from it. At this point, it’s roughly what you’d expect from a remaster of a popular game that is still being worked on.

Of course, Diablo 2: Resurrected isn’t a typical game. It’s a remaster of a true classic that is being released at a time when COVID-19 has slowed new game releases down to a crawl. It’s also being released at a time when Blizzard is grappling with its past and struggling to define its future following a stunning lawsuit that has revealed a side of the company that many people would have never thought existed. Diablo 2: Resurrected is both a potentially problematic pull from that past and a “modern” Blizzard game that has to wipe away memories of Warcraft 3: Reforged’s botched launch. On top of it all, the Resurrected team has to optimize this game while Blizzard goes through what appears to be serious internal turmoil and while they navigate the suboptimal conditions caused by the pandemic.

Diablo 2: Resurrected probably won’t end up being another Warcraft 3: Reforged, but it’s already facing increased scrutiny that may ultimately justify a small delay.