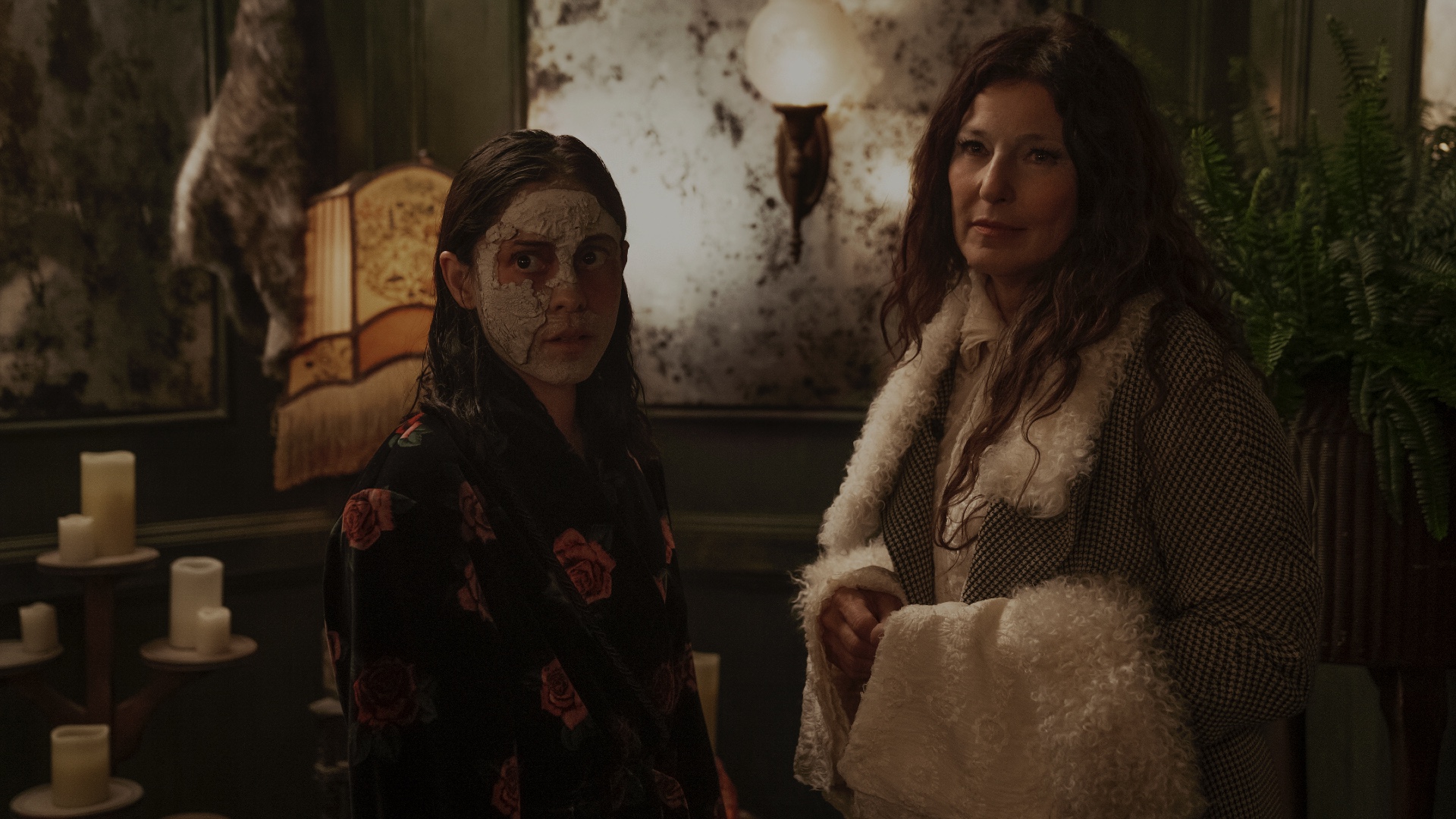 Brand New Cherry Flavor is an intense, at times bizarre experience. The Netflix horror series based on the Todd Grimson book of the same name intends to capture a dream-like witchiness in early ‘90s L.A. To that end, it’s hard to argue that the endeavor is not successful.

The show, run by Nick Antosca and Lenore Zion (Channel Zero), is so dreamlike, however, that sometimes it can be difficult to determine just what is going on. Throughout the first season, we see indie filmmaker Lisa Nova (Rosa Salazar) dip her toe into some dark magic, but who’s to say she wasn’t experienced in the subject all along?

It’s all compounded by the fact that Brand New Cherry Flavor’s ending doesn’t conclude as definitively as one might expect. The door is clearly open for a second season. What kind of terrifying entities might march through that door? Well, let’s break down the finale to find out.

The first big question that the Brand New Cherry Flavor finale has to answer is actually answered quite definitively and quite satisfyingly two episodes prior. In episode 6, Lisa is beaten to near death and then carried away to Boro’s home where she is placed in a tub of rejuvenating white liquid (not entirely unlike in the film Wanted. That was pretty good! You should check it out). As Lisa recovers from her near-fatal injuries, the entity known as Boro embodying a woman named Jennifer (Catherine Keener) decides to fill her in on her full story.

Nearly 1,000 years ago, there was a handsome man in South America (who Boro calls James Dean for simplicity’s sake) who happened upon a stunning white jaguar. Naturally James Dean and this white jaguar have sex immediately. In doing so, James Dean takes on a bit of the white jaguar’s power and becomes his culture’s king. Since James Dean got something from the white jaguar or “mother jaguar”, the cat wants something in return. The white jaguar wants James Dean’s beautiful young wife as a sacrifice but James tries to trick her into eating another young woman. This does not work so the jaguar finds James’s wife, eats her anyway, and then mauls James nearly to death.

With James’ last bit of strength he uses his jaguar powers to “jump” into the body of a young girl who came upon his body.

“I’ve been jumping ever since,” Boro concludes.

Boro is a man from a 900-year-old South American culture who made a literal deal with a devil (or something like it), though the entity has inhabited so many bodies over the years that it’s basically genderless and inhuman now. This all seems like privileged information though. Why would Boro tell Lisa Nova the real story of their origin? That’s because there’s something not quite right about Lisa either.

Brand New Cherry Flavor doesn’t explicitly confirm that Lisa Nova is a magical being but it does reveal she has some sort of supernatural lineage. When Lisa begins to see dispatches from the other side after drinking Boro’s guinea pig potion, she is continuously haunted by a strange wicker apparition. In the finale, Lisa also comes across a white jaguar couch (Boro says the Spaniards turned the white jaguar into a couch) and then a faceless woman sitting atop of it.

Lisa concludes that this apparition is her dead mother trying to help her. Sure enough, the spirit gives her a room key to the motel that Lou is hiding in to complete her revenge, so there’s no reason to doubt her. The only question that remains is are all three of these apparitions (the wicker creature, the faceless woman, the jaguar couch) the same being, or is only one of them Lisa’s mother?

What’s Next for Boro and Mary?

Another reason why Boro is so invested in Lisa’s health is that she covets her body. In a flashback we see that Jennifer is a hokey Tarot card reader and fortune teller before Boro inhabits her. Boro clearly likes to possess those who have some interest in magic. With that in mind, Lisa would be the ultimate prize.

Unfortunately for Boro, however, Lisa’s will is too strong to be taken over by force. After Boro fails to possess Lisa and she gets away, the spirit settles for a consolation prize: Mary Gray (Siena Werber). Mary is a young actress and Lisa’s former lover. While filming their indie horror film in the woods, Lisa and Mary take peyote and then Lisa films as Mary gouges her own eye out. Naturally, Mary has an eye (sorry) towards revenge against Lisa now. That brings her into Boro’s orbit. While Boro didn’t really want to inhabit Mary’s “damaged” body, desperate times call for desperate measures.

Should Brand New Cherry Flavor receive a second season, Boro as Mary will likely be the “new” big bad.

What Happens to Lou and Jonathan?

If they ever were a fable as to why not to be a sex creep (and hopefully no one needs more convincing on that front) it is the story of Lou Burke (Eric Lange). Though Lisa’s curse on Lou takes awhile to get going, once it finally takes hold there’s really no stopping it.

In this final episode, Lisa confronts Lou one last time in his motel hiding spot. He confirms once and for all why he took her movie from her. It really was because she removed his hand from her thigh. That’s all it took for him to kill her dreams. Never could he have imagined the mountain of paranormal shit that one petulant decision would bring to his door though.

Lou has accepted that his son Jonathan is dead, now a zombie in the thrall of Boro. What’s harder to accept are all these splitting headaches. Thankfully, Lisa can help with that. Remember way back in episode 3 when Lisa had Lou snort a powder containing a worm? Well, that worm grew, wreaking havoc on Lou’s body. Now Lisa pulls it out, relieving Lou’s pain but ultimately rendering the movie fanatic blind.

This is likely the end of Lou Burke in this story. The character amounts to essentially a miniboss in the beginning of the novel and now Lisa is off to bigger and darker things. But no one will soon forget the destruction wrought upon him.

What Happens to Everyone Else?

But seriously: pretty much everyone introduced throughout the series is dead or decommissioned by the end of the final episode (save for Lisa and Boro/Mary). Code (Manny Jacinto) is killed by Mary. Christine (Hannah Levien) is killed by Lou’s goons. Roy Hardaway (Jeff Ward) is decapitated by zombies. It just goes to show you that magic has a cost. And in this case that cost is lots and lots of death.

Why is Lisa Going to Brazil?

Though Lisa finally gets what she supposedly wanted all along when producer Alvin Sender (Patrick Fischler) buys her film and allows her to direct it, she decides to leave LA anyway. The last thing we see before the season concludes is Lisa stepping out into the light, about to get on a plane bound for Brazil.

Clearly Lisa is returning to her ancestral home, intent on finding some answers about her mother, herself, and her apparently magical sensitivity. While at first glance, this might seem like a bit of a cop out for a series that appeared to be building toward an ending through eight episodes, it really could just be the next step of a much larger story.

As Slate notes, Brand New Cherry Flavor’s first season covers only 66 of the novel’s 344 total pages. Everything that just happened in the first act of this story was a place setter. Things don’t really get rolling until Lisa gets to Brazil. Now the big question is: will Netflix order Brand New Cherry Flavor season 2, or will it get added to the big, sad pile of Netflix series that were a bit too confident in the algorithm?