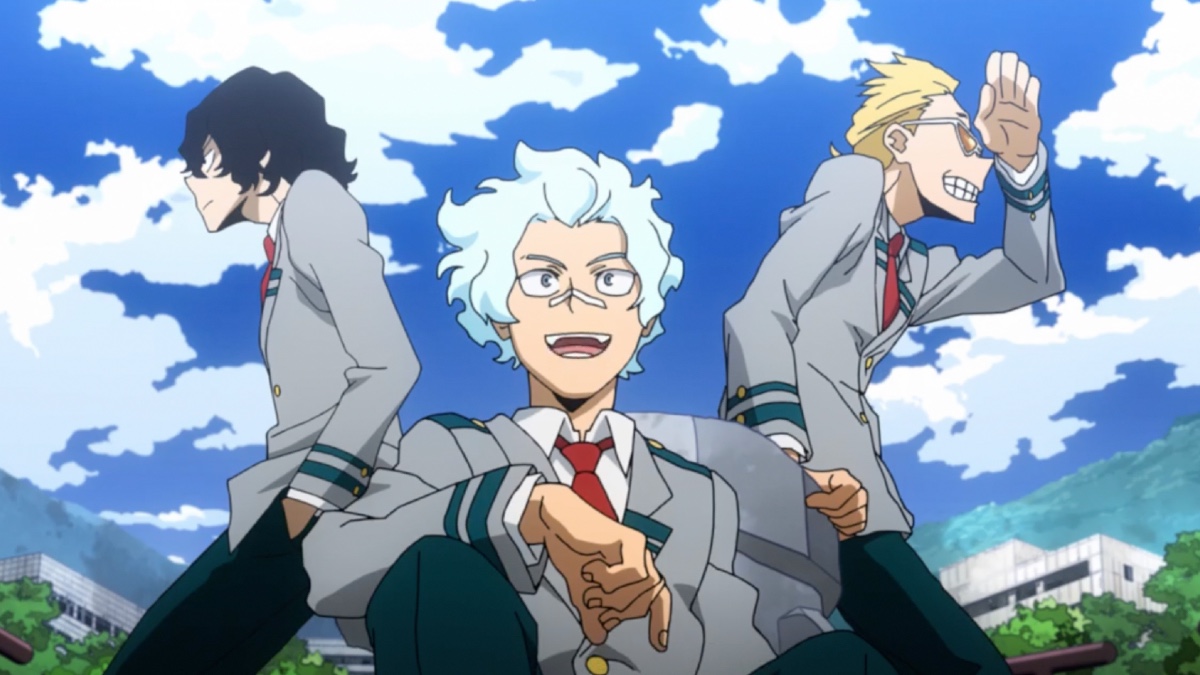 A large portion of “More of a Hero Than Anyone” obsesses over how the weaponized monsters known as Nomu are essentially puppets that carry out the larger actions of Tomura Shigaraki and the League of Villains. The very nature of Nomus and their utility as villainous tools is put under scrutiny, but the episode uses their slave-like nature to highlight how many heroes have also started to function as puppets and become emblematic of their larger cause. This applies to Midoriya, Hawks, All Might, and plenty of other characters, but “More of a Hero Than Anyone” specifically examines Shota Aizawa and Present Mic in contrast to a Nomu of which they share history. An enlightening symmetry is found between the characters, but despite their good intentions these marionettes can’t help but tangle up their strings.

One of the most exciting aspects of “More of a Hero Than Anyone” is that it largely focuses on the teachers as they tackle the growing Paranormal Liberation War dilemma, albeit from a more dangerous and personal angle. Shota “Eraser Head” Aizawa and Hizashi “Present Mic” Yamada are two Pro Heroes that have always been present since the very start of My Hero Academia, but they very rarely get the opportunity to drive a storyline forward. This already makes “More of a Hero Than Anyone” stand out in a positive manner and I’d immediately watch a spinoff series where the duo just take on Nomu-related crimes, whether it’s in the present or back during their golden years all Miami Vice style. However, the fact that Aizawa and Present Mic interrogate Kurogiri at Tartarus as the anime indulges in a twisted riff on The Silence of the Lambs is even more delightful.

Kurogiri is one of those villains that’s easy to imagine as a permanent fixture to Shigaraki and the League of Villains, but the void-like villain actually hasn’t been seen for some time. “More of a Hero Than Anyone” doesn’t diminish how Kurogiri hasn’t been important since season one’s USJ Incident. There’s real weight to this reunion and the episode makes sure that its impact is felt. Gran Torino is even present to oversee events in a way that adds more mystique and gravitas to this tense scenario.

This entry’s heavy dive into the more general nature of the Nomu produces some enlightening context on these monstrosities and that they serve a purpose that’s greater than just extra muscle for the League of Villains. “More of a Hero Than Anyone” underscores how truly genetically twisted the Nomu are and that they shouldn’t be viewed as humans any longer even if that’s where they began. My Hero Academia really hammers in the mad science angle to all of this, which has been absent from the anime for a while, but it’s already set to be very important in what’s to come with Shigaraki. Some may reduce the Nomu developments into basic Frankenstein’s Monster storytelling, but this episode is quick to prove why it’s much more than that.

The rumors of the braindead disposition of Nomus persist, but in reality there are trace elements of their original personality that can shine through. This is something that My Hero Academia has teased since the very first season, but hasn’t really done anything with until this moment. This information holds tremendous importance since it’s revealed that Kurogori is in fact a Nomu who happens to be made from the remains of Aizawa and Present Mic’s best friend, Oboro Shirakumo.

At this point My Hero Academia has provided dozens of origin stories and showcased various permutations on how hero teams and friendships can function, but “More of a Hero Than Anyone” provides one of the series’ most powerful flashbacks from its entire run. Oboro Shirakumo, before he became Kurogiri, went to U.A. High alongside Present Mic and Aizawa. These “Three Dumbingos of Class A” were basically their generation’s version of Midoriya, Bakugo, and Todoroki. The parallels here make this tragic story even more effective and conjure a tiny bit of dread that one of Midoriya’s closest friends could also wind up with a fate that’s similar to Shirakumo.

Aizawa, Present Mic, and Shirakumo are so entertaining to watch and they preach a touching philosophy wherein if one of them screws up then the other will have their backs. The principle becomes bittersweet considering Aizawa and Present Mic weren’t enough to save Shirakumo and it provides greater weight to Aizawa’s pursuit towards protecting his current students–especially his recent interest in helping out Hitoshi Shinso.

Shota Aizawa genuinely cares, but he also feels residual guilt and doesn’t want anyone else to turn out like Kurogiri. Shirakumo is someone that Aizawa wanted his students to model themselves after, which makes his friend’s dark fate continue to sting. It’s something he can’t move past. The title of this My Hero Academia episode–”More Of A Hero Than Anyone”–refers to Oboro Shirakumo, so it’s even more chilling that this titular legend is reduced to a semi-catatonic antagonist.

“More of a Hero Than Anyone” never loses its momentum and its painful to have Aizawa and Present Mic reminisce over how much they cherished Shirakumo, only for the husk of what’s left of him in Kurogori to worry about Shigaraki instead. The episode continues to move in a direction where it seems like the positivity of these heroes and the strength of their friendship will somehow be enough to break this Nomu spell and pull Shirakumo out of Kurogiri, which makes it so effective when this falls short and they ostensibly break their former friend. Admittedly, there’s a glimmer of Shirakumo that returns that provides the most cursory of intel about Shigaraki, but Aizawa and Present Mic don’t view any of this as a “win.” It’s arguably the series’ very best Shota Aizawa episode.

“More of a Hero Than Anyone” does prioritize Eraser Head and Present Mic’s conflict with Kurogiri, but there are still some brief moments with the younger generation that really deliver. Class 1-A get a chance to catch up with each other and share their accomplishments from over winter break and this is all incredibly natural. The changing room scenes effectively contrast how the boys and girls of 1-A are doing in the new year.

Uraraka’s continual embarrassment over Deku’s Christmas present to her, as well as Mina Ashido’s playful teasing on the manner, is also a significant moment of levity with heavy character development that balances out the grim material at Tartarus. All Might also spends the majority of his energy on a strange visual gag and then pouts when it’s not properly appreciated by U.A. High’s student body. For them, everything truly is “fine and dandy like cotton candy,” but a reckoning lies ahead.

My Hero Academia has tackled some lofty and more personal stories over the past few episodes, but “More of a Hero Than Anyone” is a rare installment that succeeds more with its message and themes than what it technically covers. The actual plotting is extremely minimal and it’s a very stripped down entry from the season, but it’s absolutely essential for what’s to come as season five heads into its villain-centric endgame. It provides a backstory that’s not only very satisfying and disturbing, but it’s also a functional tool in how the heroes will overcome the villains in this impending showdown.

Oh, and Tenya Iida has mastered the art of how to be “gentle in manner,” so watch out, League of Villains!

15 Most Underrated Games of 2021
The Matrix Resurrections Finally Reveals the New Merovingian
eBay Holiday Gift Guide for Gamers and Hobbyists
Top New YA Books in December 2021
Could She-Ra Come to Masters of the Universe: Revelation Season 2?