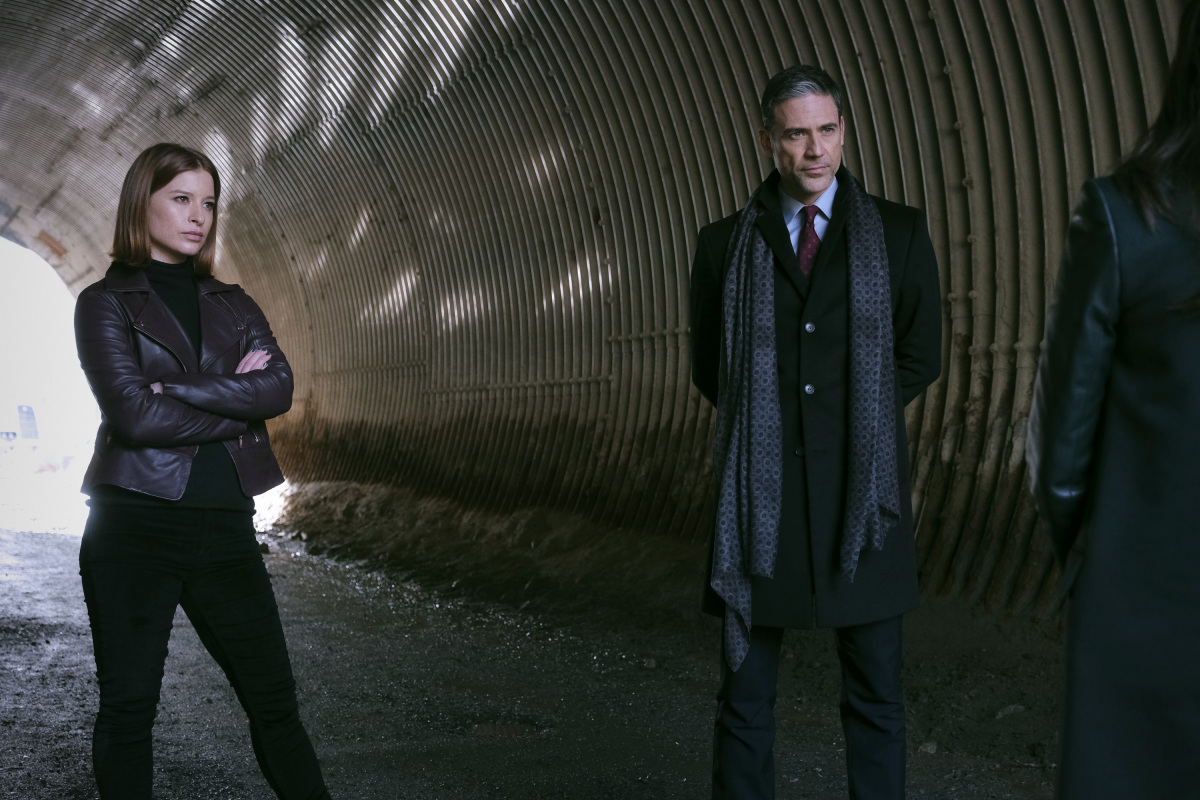 Since the very first episode, Leslie Larr has been a menacing and mysterious presence on Superman & Lois. The shining example of Morgan Edge’s plan to take over human bodies with Kryptonian souls (and powers) has been portrayed as everything from a loyal corporate right hand to a Kryptonian powerhouse capable of doing Edge’s dirty work to (in the latest episode) someone who can go toe-to-toe with a hero like Steel in a dramatic late season fight scene.

But for Stacey Farber, who plays Larr, it all started off with a simple character description before an audition, one which she actually reads to me from an old email as we begin our interview.

“Leslie. Thirties. The right hand to one of the most influential people on the planet. She’s gone from a young, idealistic dreamer to a hardened, world-worn dream-killer. Athletic, strong, and oftentimes heartless.”

While this hints at the hidden depths of the character, there’s certainly nothing that screams “Kryptonian” at you. But there were other hints that came along with that.

Whether she’s issuing veiled threats to Lois Lane or vaporizing Edge’s foes with heat vision, there’s no question that Larr is up to the task. But playing up the dichotomy of the character in her corporate and supervillain guises is a challenge on its own.

“I think one of the harder things that I had to do throughout the season was communicate a sense of strength and of power and control without saying a lot,” says Farber. “Leslie is Morgan Edge’s right hand, and a lot of the time, I’m just there backing him up. But… I tried to add some nuance to it when I had scenes with Adam Rayner, who plays Morgan, and he sort of snaps at Leslie, or he tells her what to do. I thought that was a really interesting relationship to explore. Sometimes I played it like I was afraid of him. Sometimes I played it like she was annoyed by him. Not that I have an issue with authority, but with bosses, sometimes you’re sick of being second in command, so I thought maybe she would feel that sometimes, because she’s also super powerful.”

That she is, and those powers are all on full display in episode 14, “The Eradicator,” which sees Superman and Steel facing down Larr and some newly-minted Kryptonian converts on the streets of Metropolis. It’s the first time we’ve seen Larr really cut loose in full Kryptonian fashion for an extended period, particularly when she squares off against Steel. And for Farber, perhaps best known for her work on DeGrassi: The Next Generation, this was something of a switch.

“When they cut these things together, they are so quick, but we spend so much time filming them, and I love every second of it,” she says. “If there’s ever a liability or any potentially dangerous situation that could injure an actor, they don’t want to put us in those, even though I would have loved to do all of the stunts myself if I were capable.”

This is also the most time we’ve spent with Larr in her Kryptonian ceremonial wear, which, like Edge’s is a sharp black outfit, but with some touches you might not catch on the first viewing.

“They had decided early on that red would be a color for me and for this character, a particular shade of it,” she says. “The super suit that I have is sort of like scuba material. It’s actually really comfortable. And this stitching along the side of it is that shade of red. The belt that I have has that shade of red in it, and the cape that I have is designed to look really polished and look nice, as the character did all season. But also, it matches Morgan Edge’s cape, in a way.”

It was during filming of this week’s big superpowered brawl, on a beautiful Vancouver afternoon, that Farber got to reflect on the experience of playing Leslie…while watching her stunt double get “choked out” by one of the heroes.

“Basically, I had to sit on the sidelines and just wait for the camera to move so that it was my turn to go act like I was being choked out,” she says. “I was just sitting on the edge of this fountain, watching them shoot this sequence, and I was in my super suit with my cape and an iced coffee…Those moments, they pop up randomly and rarely, but when they do, they’re so sweet. I was sitting there thinking, ‘I love this job. I love this character. I love this show…I’m so grateful that I got to play Leslie, and how cool is this that I’m sipping my iced coffee in a super suit that was tailored to my body and made for me?’”

That should be cool enough on its own, but then Farber adds: “And I also get to try to beat up Superman. That’s pretty awesome.”