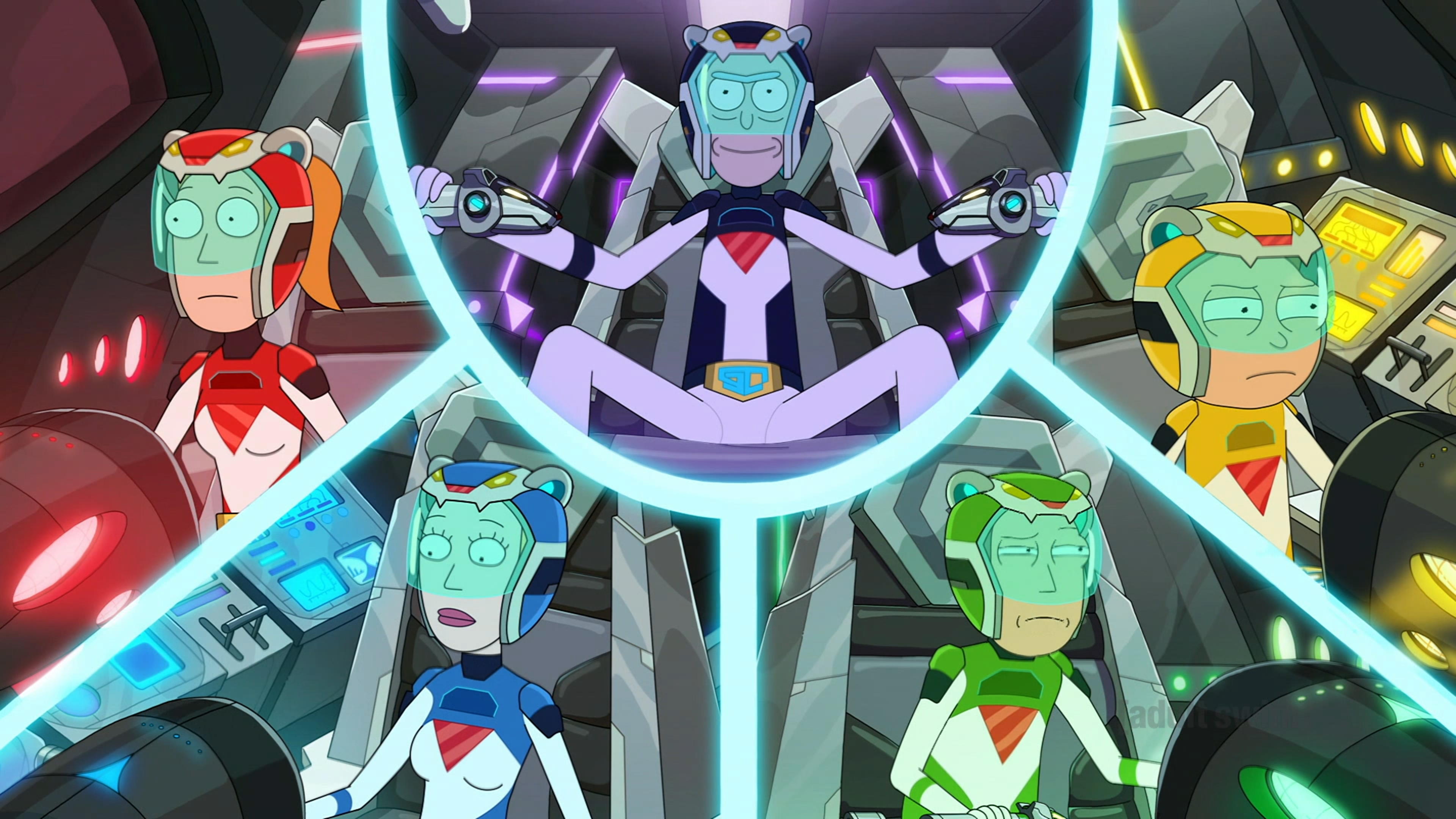 If there’s one thing characterizes season five of Rick and Morty, it’s that everything happens so much, all the time. It’s tough to pinpoint exactly how this makes it different from prior seasons. After all, early in the series’ life, co-creator Justin Roiland said the goal with a Rick and Morty plot was to take a premise another show would’ve made a whole episode out of and instead just make that the first act, using the remaining acts to pile insanity atop insanity. This is a series with a setting of infinite universes and a protagonist who’s basically a god, so the scope of every episode should reflect that by going all out.

It’s therefore tough to say why “Gotron Jerrysis Rickvangelion” and all the other breakneck-paced, amped up episodes of season five feel so overwhelming and different compared to what we got from Rick and Morty past. I might need to rewatch the whole series to definitively figure out what precisely is going on here, but I’ll take a general stab at it. The plots of older episodes probably worked for two core reasons: one, strong characterization kept everything grounded and, two, no matter how much crazy shit an episode piled on, it still felt like an extension of the initial, core premise.

Take, for example, season three’s premiere episode, “The Rickshank Redemption,” which is one of the first episodes I can remember stunning me with just how stuffed with… stuff it was. In this episode, we learn that, since Rick’s incarceration at the end of the previous season, the Galactic Federation has colonized Earth. We then see scenes from inside Rick’s mind, we get Rick doing a whole lot of body-swapping, and we witness the fallout of Rick singlehandedly destroying the Galactic Federation’s economy.

It’s a lot (this is also the infamous Szechuan Sauce episode), but it manages to stay coherent and focused because the drive of the episode throughout is Rick escaping and upending the Galactic Federation, thereby restoring order. Furthermore, there are good, grounding character moments between Rick, Summer, and Morty as well as a surprising change in the family dynamic at the end when Beth announces she’s leaving Jerry. The show’s setting, too, feels solidly characterized as the episode builds upon previous plot elements—the Citadel of Ricks, the Cronenberg universe, and Birdperson—in fun and inventive ways.

Now, take “Gotron Jerrysis Rickvangelion,” which is ostensibly a Voltron homage episode, but which, in the end, actually has precious little in the way of giant robot vs. monster battles. Yes, to an extent, the episode is a deliberate bait and switch; it sets you up for a giant robot homage, but reveals itself instead to be a stealth gangster homage (Goodfellas, mostly, though there’s some Scarface in there, and also a reference to The Aviator, just for kicks). This is one of co-creator Dan Harmon’s signature moves, combining two drastically different genres together. He most notably first showcased it in the season two Community episode, “Critical Film Studies,” which managed to be both a dual homage to Pulp Fiction and My Dinner with Andre, and its own interesting Frankenstein’s monster besides that. The problem with “Gotron Jerrysis Rickvangelion” is that, as more bizarre plot turns get thrown in, it doesn’t feel like a giant robot episode or a gangster episode; it’s just a bunch of crazy crap.

There are two big plot developments that make it feel like random junk is just happening. My least favorite is the sudden introduction of anime characters who make funny anime faces and noises. This series has never shown much respect to the fourth wall, but there’s something very lazy and lame about these goofy characters drawn in a different art style that rubs me the wrong way. It feels sort of Family Guy-esque in the way that series is so centered around inane asides and cutaways that the plot is just a formality. These anime characters, too, signal that this storyline is just a lot of silly fluff.

As far as characterization goes, this is another episode that, like “Mortyplicity,” flirts with the concept of family being the most important thing, but, also like that episode, it does so seemingly just to point and laugh at the idea. It’s hard to take the family stuff seriously (and I don’t think we’re expected to) when the characters abruptly reconcile immediately after plotting to murder one another (again, compare this with Jerry and Beth’s separation, which took a whole season to resolve).  There’s potentially interesting character stuff at the center here, with Morty and Summer vying for Rick’s affection, but not enough time is spent on it to lend it any emotional weight. Also, all emotion kind of goes out the window when the climax of your episode is a giant incest baby named Naruto slaughtering anime people.

“Gotron Jerrysis Rickvangelion” isn’t the worst episode of season five, but it’s just another episode of season five. I feel I should note that the overstuffed zaniness of these episodes is not entirely exclusive to this season. This brand of Rick and Morty has always been lurking in the series’ DNA and I’ve found portents of the problems I have with these episodes rearing their heads in my reviews as early as season two’s “Get Schwifty.” The core difference here is that those older episodes were at least still consistently funny, while season five episodes only get a few chuckles out of me per. “Gotron Jerrysis Rickvangelion” unfortunately continues that trend.

Also, Dan Harmon already did a much better Goodfellas homage in the first season of Community.