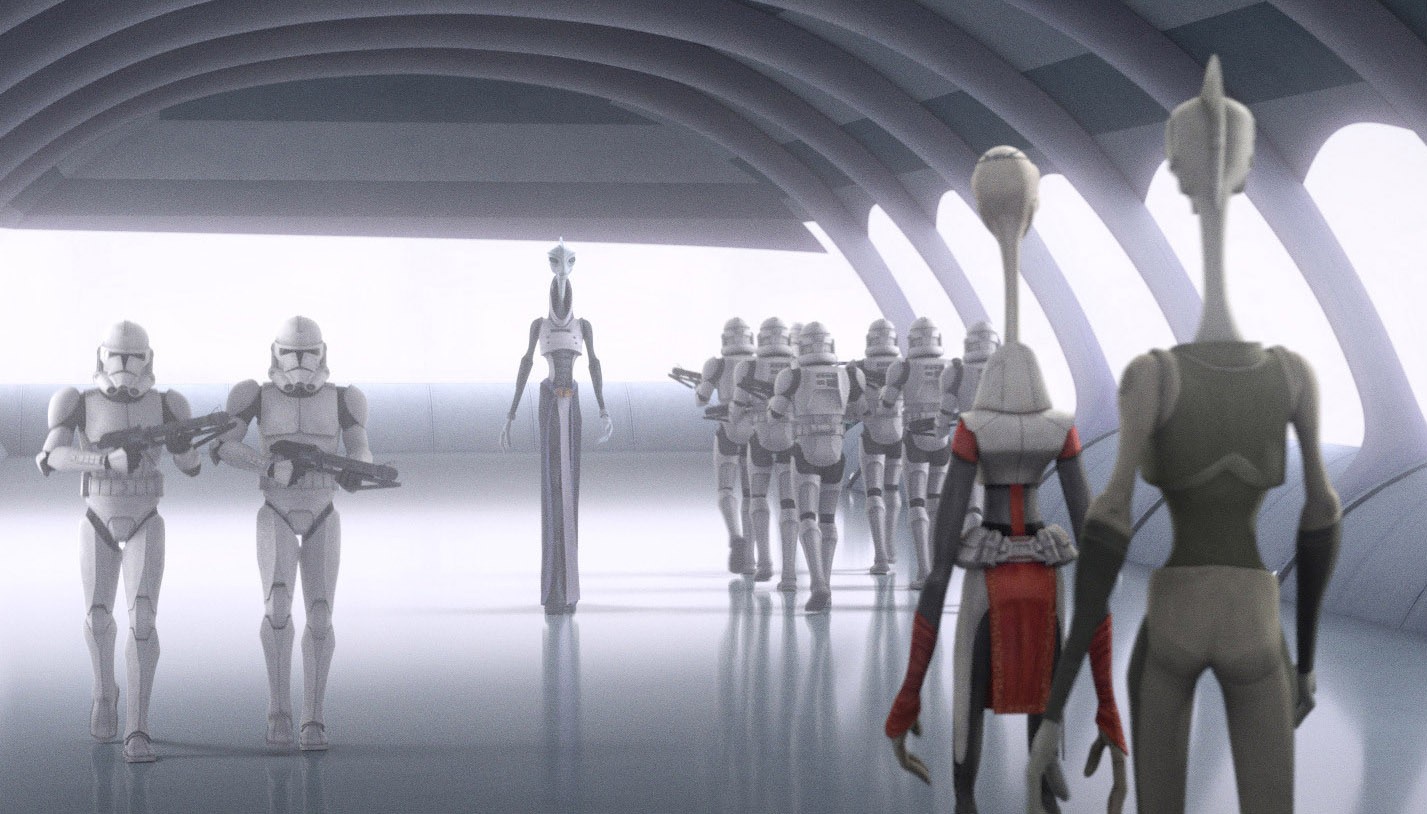 The Bad Batch infiltrate a secret Imperial base to rescue a trapped clone in episode 14, “War-Mantle.” Several returning The Clone Wars characters have major but understated roles as the show details how the clone troopers are being used to train their stormtrooper replacements. With connections to both the previous animated shows and Rogue One, “War-Mantle” slots right in to the wider saga while also standing on its own.

The episode’s major new character is actually a returning face from The Clone Wars, although you wouldn’t necessarily know it. He first appeared in the episode “Missing in Action” in season five, living as an amnesiac dish-washer. R2-D2 and others found his clone armor and jogged his memory, just in time for Gregor to be seemingly killed in battle.

But he was confirmed to have survived that blast in Rebels, where he teams up with Rex and other “retired” clones hiding from the Empire. Gregor really did die in the fight against the Empire in Rebels, but not before telling Rex he was glad to fight for a cause he actually chose to believe in.

Scorch and the Republic Commandos

– Project War-Mantle places clone commandos as instructors for conscripted stormtroopers. It turns out, some of those commandos are familiar: the trooper with white and yellow armor and a bright blue visor is RC-1262 “Scorch,” one of the clone troopers from the Republic Commando video game, which is no longer canon. But Scorch was later re-canonized with a minor role in The Clone Wars season three episode “Witches of the Mist.”

– The idea of clone commandos (elite soldiers genetically modified slightly away from the Jango Fett template) were a large part of Legends clone lore.

The Origin of TK Troopers

On the other side of the clone-conscript divide in the early days of the Empire are the human soldiers with the “TK” designation, who the Empire have gathered from around the galaxy. The Bad Batch points out that they don’t have any loyalty to the Republic and instead are blank slates to project the ideals of the Empire upon and spread them. The “TK” designation was used for stormtrooper call signs from the very beginning, popularized with “TK-421” in A New Hope.

– Some of the music in this episode is reminiscent of the Death Star escape scenes in A New Hope.

– Another thing War-Mantle shares with the Death Star is a thermal exhaust port, through which the Bad Batch attempt their escape. This same element was what allowed Luke Skywalker’s proton torpedo to break through the Death Star’s defenses and start the chain reaction that destroyed it in A New Hope.

– Project War-Mantle first appeared as one of many names of secret Imperial projects stored on the Scarif facility from which Jyn Erso and her team stole the Death Star plans in Rogue One. Its identity was confirmed in The Bad Batch episode 3, when Admiral Rampart said it was the code name for the effort to shift the Empire away from using clone troopers to conscripts.

This episode is set on the planet Daro, a new location.

The dog-like creatures the stormtroopers use to hunt down escapees are massiffs, which have appeared throughout the franchise. They debuted in Attack of the Clones as guard dogs for the Tusken Raiders. More recently, they gained wide recognition as pets instead of (or in addition to) guard animals when Din Djarin pet a good doggo in The Mandalorian.

Why Spider-Man: No Way Home is the End of an Era for Tom Holland
Doctor Who’s Scariest Episodes: One Fan’s Horror Highlights
The Walking Dead Season 11 Episode 8’s Big Death Explained
“In The Beginning” Featurette | Marvel Studios’ Eternals
Back 4 Blood: Every Cleaner Ranked