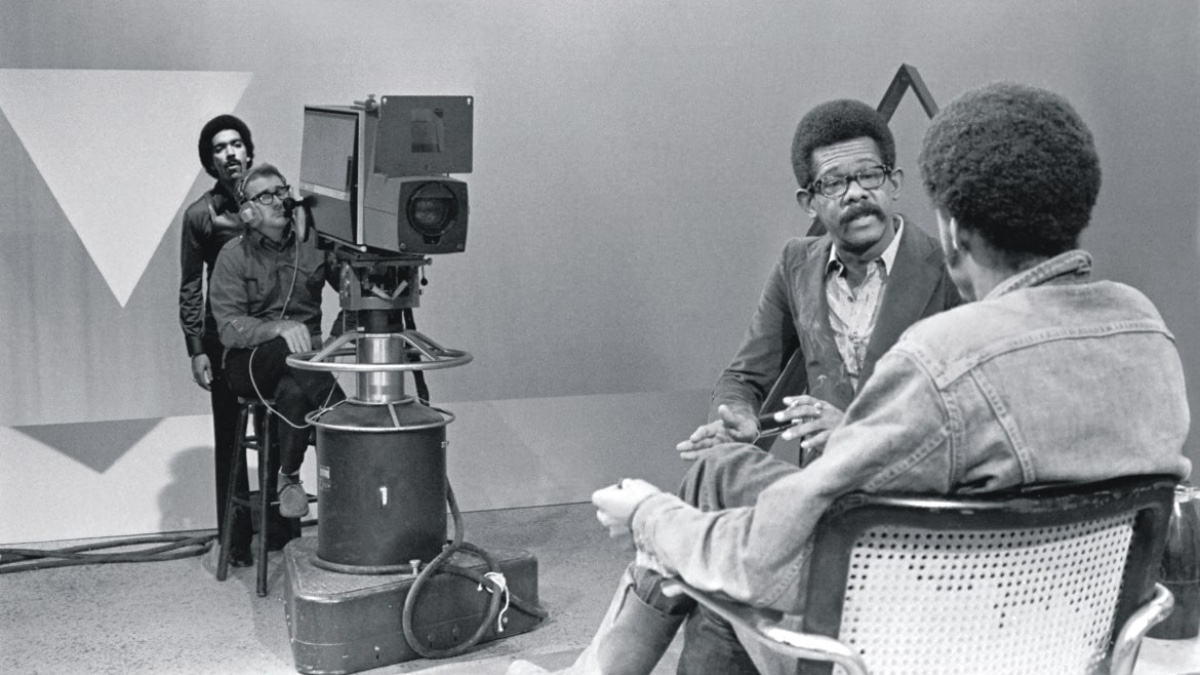 Just past the halfway point in the documentary Mr. Soul!, poet Felipe Luciano calls Ellis Haizlip “the most effective, insidious revolutionary that I have ever met.” It isn’t meant as a specific accolade, but it is a badge of honor for a man who honored the true meaning of sedition. Subversion in the arts is a skill which can be expressed as simply as putting a mustache on the Mona Lisa. Seditious political expression is rarely so subtle. The creator and host of the all-too-short lived public television variety program Soul! achieved a dream mix of diverse thought, some which went under the radar, some designed to be unnoticed, all of which was riveting, and everything absolutely accessible.

Soul! captured everyday insurrection. Melvin Van Peebles’ 1971 independent feature Sweet Sweetback’s Baadasssss Song proclaimed to be unapologetically Black, Haizlip saw no reason to bring apology into the equation. Nothing he was doing, no act he was showing, no poem or word or emotion needed clarification, only amplification. Everything Haizlip brought to the soundstage was an ordinary pain or exultation expressed with unadulterated realism. Yet, it subverted every expectation, and proved a street battle could be fought on the airwaves. In 1970, Gil Scott-Heron frustratingly sang “The Revolution Will Not Be Televised,” but from Sept. 12, 1968 through March 7, 1973, not only was a coup mounted on small screens, but it had great beats you could dance to. Even the spoken word performances had rhythm, the oral arguments and affirmations of the interviews were lyrical blasts of staccato, flowing, chaos.

Patti LaBelle was the first musical guest. Backed by the Bluebelles, their voices brought home audiences “Somewhere Over the Rainbow.” Stevie Wonder got so caught up in the energy of the studio audience, cameramen had to change reels and excitedly wondered if he would ever get tired of playing. Earth, Wind & Fire showed how live playing on TV could be done. There was no lip-syncing on Soul!. It would be another few years before Soul Train would answer for American Bandstand, but Soul!’s host Ellis Haizlip never tried to be a hip Johnny Carson.

Mr. Soul! is the story of the man behind the first Black variety show on American television. The documentary explains how the March 1968 Kerner Commission Report found the media played a big part in the racial divide in America. Black Americans rarely saw themselves reflected on the small screen. Shows with African-American actors, stars, and hosts had been produced by networks, but most were only short-lived, no one was really allowed to be themselves, and their social limitations were strictly enforced. African Americans did get one featured role in nationally broadcast network and affiliate television.

The Six O’clock News guaranteed on-the-spot footage. They showed every graffiti-tagged trash can left overfilled on ghettos streets. They fetishized poverty, and promoted riot coverage before the first windows shattered. They didn’t cover much of the burgeoning renaissance which was happening in the culture. Public broadcast stations led the first charge, the documentary details, programming shows like Inside Bedford-Stuyvesant, Say Brother, Black Journal, and Like It Is, socially conscious and educational content made by and for African Americans. Haizlip, was asked to help create a “Black Tonight Show” in the late ’60s. Mr. Soul! shows nothing could have been further from his mind. “What he was doing, every night he was on that program, was changing someone’s mind about Black folks,” poet Sonia Sanchez says in an interview.

The documentary casts the show as much more than a groundbreaking arts showcase. It presents it as an in-your-face avant garde performance art entity in itself. One that could take on any character, as long as it was real. Soul! was also the first true poets’ coffeehouse on television, the film points out, and it danced all over any rhymes the Beats might have snapped to. The Last Poets bounced epithets off percussion onto an audience who shook words like maracas, and fed a need to the people watching at home. Mae Jackson’s words could build a castle of words big enough to transition from the frenetic ensemble jazz of the McCoy Tyner Quartet to the somber acoustic guitar of Bill Withers..

The show also served as a church, its congregation reaching far beyond West 55th Street, the studio at WNET in New York, where it was filmed. The documentary makes a great case for the show as a conduit of spiritual affirmation. Haizlip was brought up in the church, and brought the fervor of his faith in all things Soul!. Wilson Pickett and gospel singer Marion Williams’ rendition of “Oh Happy Day” lifted the faithful off their seats and onto their feet. Billy Preston and the God Squad channeled holy spirit through his fingertips. Meditations proclaiming the inner beauty of blackness raise the very chakras of the viewing community.

The program was a political roundtable, in the round, surrounded by a studio audience constituency, as well. The conversations ranged from the global environment to the nature of creation. The interview guests ncluded Cicely Tyson, Stokely Carmichael, Kathleen Cleaver, Muhammad Ali, Sidney Poitier, Kathleen Cleaver, and Harry Belafonte. Haizlip, who was gay in the world before Stonewall, gets Louis Farrakhan to find a place in the heart of The Nation of Islam for those whose sexuality deviated from proscribed norms. James Baldwin grants more than an interview to poet Nikki Giovanni. The documentary brings out how each of these lives touched one another more than what could ever be shown on screen.

Don’t let this fool you into thinking the documentary is all righteous rage and rhythm and blues. Mr. Soul! has many funny bits, and not just from the performers. Soul! was usually taped live, and this proves to be problematic for the limits of public television. Live broadcasts mean no interruptions and no censorship. Haizlip was brilliant, no doubt. More than educated, he had an inner emotional wisdom which transcends even artistic thought. But he never quite understands the meaning of the word censored. When he’s finally forced to bleep the shit out of a poem by Amiri Baraka on heroin addiction, Haizlip makes sure everyone hears his reluctance to cut it. He instructs the sound engineers to turn the volume way up so the fill-in noise on TV is as ugly as viewers are supposed to think the word is. This is more than a poetic choice. It is a punchline in a running gag.

Everyone interviewed behind the scenes has a funny story. What they are trying to say may be painful, hurtful, or even dangerous. But they know which words bite, and when to chew. Whether it’s the true stories behind the accepted myths or on-the-spot improvisations to cover technical difficulties, each anecdote ends with a shake of the head and an appreciative grin. Haizlip created Soul! with producer Christopher Lukas, who stuck the exclamation point on the title, and brings funny behind-the-scenes stories throughout. The theatrical producer Haizlip took on host duties out of necessity after trying academics, like Harvard psychiatry Professor Dr. Alvin Poussaint. With his horn-rimmed glasses, ultra-calm demeanor, and “right on” encouragements, Haizlip made some big gaffes on live TV. All of these are celebrated gleefully.

President Nixon wasn’t a fan, but the documentary shows he watched. He may not have tuned in, and he certainly wasn’t turned on, but inasmuch as he could be, the paranoid president was aware of the sounds and voice of Black life. Mr. Soul! shows how the Public Broadcasting Corporation suffered a tidal shift in programming after the Johnson administration vacated the White House. The show lasted five years before it was cancelled by the Nixon administration, which cut PBS funding so deep, it needed The Electric Company to pay its bills. But how cool it must be for Bill Moyers to be the only person specifically named, besides the Black cultural programming, as someone Nixon didn’t want to be blamed for silencing.

Mr. Soul!’s finest cinematic achievement is translating a feeling of exhilaration and expectation. Heizlip had an eye toward the future, a radar for young talent, and the sense to balance established acts with rising talent. Dancers like Carmen de Lavallade might find themselves free to experiment with cutting edge moves to a solo piano performance by Stevie Wonder. A 25-year-old Al Green is as surprised as the audience at how much he is instantaneously embraced. Hit-writing songwriters Ashford and Simpson never even thought about performing until they were approached to perform on the show. Haizlip saw art in individuals before even some artists noticed it in themselves.

Haizlip died in 1991. Mr. Soul! was co-directed by Samuel D. Pollard and Ellis’s niece Melissa Haizlip, who also wrote it. The documentary profiles a man who stayed true to his mission by remaining true to himself. He electrified public television through his vision of “Black love and Black strength and Black encouragement.” With a voiceover delivered by Blair Underwood, Mr. Soul! captures a historic run of unique and visionary television. It is as much fun to discover the show as it must have been when it first aired, in a three-networks climate expertly captured in the documentary’s opening, “in living color.”

CNN recently did a special on the history of sitcoms. Everyone watching will remember most of the clips they show, certainly every series they highlight, and almost all the stars in the highlights. There are some very recognizable faces strewn throughout Mr. Soul!, and you really have to keep a sharp eye out at all times, especially in the photographs. Younger versions of household names are all over this documentary, even a 15-year-old Arsenio Hall pulls a rabbit out of a hat.

Soul! is an important chapter of television history, but it feels unfinished because of its unrealized potential. “Can you imagine what Soul! would have been like for a 20-year run,” Questlove asks towards the end of the documentary. “Like, how different would our lives have been?” Mr. Soul! finds hope in the sting of lost possibilities.