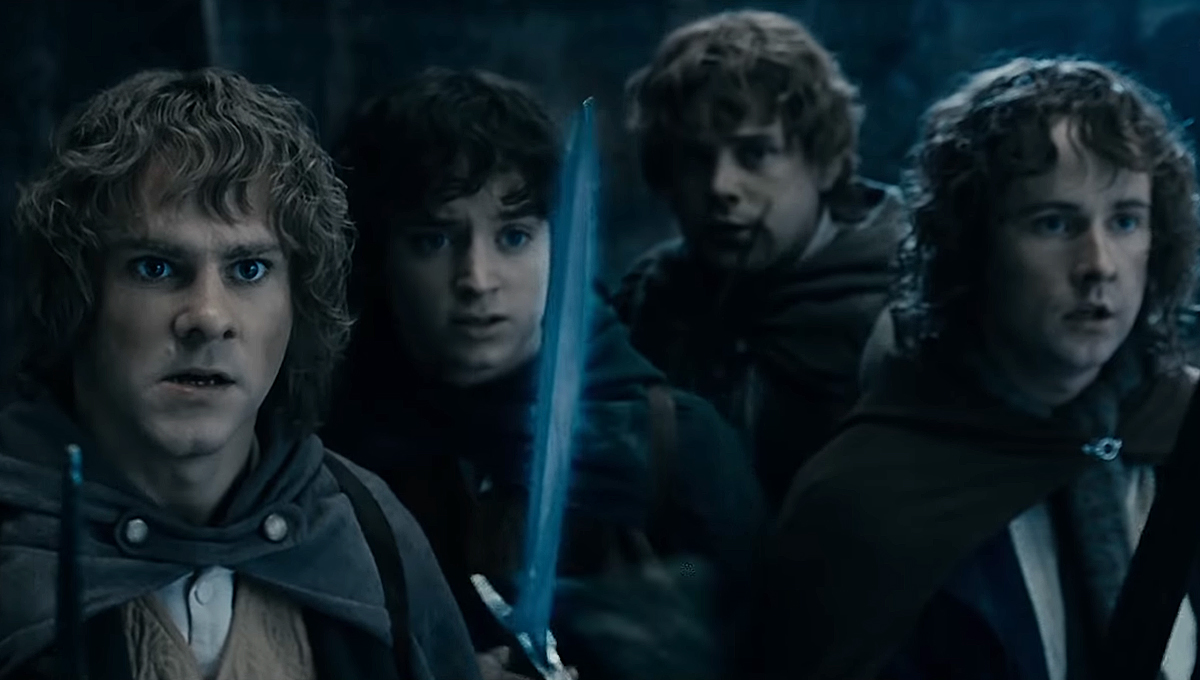 The Lord of the Rings Trilogy’s $2.9 billion collective worldwide gross and 17 Academy Award wins (one of which was for Best Picture,) certainly make a case for the 2001-2003 films being the product of a winning formula, both production-wise and plot-wise. However, the process of getting the grandiose, once-unfathomable project off the ground naturally involved producers pressuring director Peter Jackson to implement ideas often contradictory to the source material. Apparently, one such idea would have seen one of the film’s four hobbits die!

While the more loquacious half of Lord of the Rings’ onscreen hobbits, Dominic Monaghan and Billy Boyd—Meriadoc “Merry” Brandybuck and Peregrin “Pippin” Took, respectively—have told myriad stories about life on the set across the past few decades through interviews and the films’ insightfully entertaining DVD commentary, the duo brought new anecdotes in an interview with IGN promoting their recently launched, Rings-heavy podcast, The Friendship Onion. According to them, there was a brief period in production during which Jackson was being “pressured from above” (presumably New Line Cinema,) to sacrifice at least one of the film’s four hobbits—of course, with the other two being Elijah Wood’s Frodo Baggins and Sean Astin’s Samwise Gamgee—for a development that would clearly contradict the text of J.R.R. Tolkien’s novels.

While the identity of the specific hobbit producers wished to see relegated to taking second breakfast in the great beyond was not revealed, Monaghan offers a theory, stating, “It’s a good job that didn’t happen, because it would have been me,” he laughed. “It definitely would have. There’s no way they are killing Frodo and Sam, and the only ones that would be left would be Merry and Pippin. They wouldn’t kill Pippin because Pippin has a really strong story with Gandalf. It would have definitely been me. I think Pete quite rightly was like, ‘This is a luminary piece of written work, and we need to stick close to the text.’ So, he stuck by his guns. Yeah, I’m thankful that didn’t happen.”

Much to the gratitude of Monaghan and Tolkien purists everywhere, Jackson won that particular battle in the end, thereby leaving the trilogy as a more authentic take on the text. However, while the notion of actually making a casualty of one of the beloved hobbits might seem outrageous to moviegoers, especially those with intimate knowledge of the Middle Earth mythos, it was actually a sound suggestion from a purely dramatic standpoint. After all, as with Bilbo Baggins in preceding story The Hobbit, the diminutive hole-dwellers from the Shire were meant to represent average people, unprepared for the travails of life away from home, who, during times of war, find bravery within themselves when thrust into overwhelming circumstances. Pertinently, with strong bonds having been forged amongst comrades during said circumstances, the loss of one yields a dramatic payoff that’s hard to resist from a narrative perspective. Notwithstanding The Fellowship of the Rings‘ fateful death of Boromir, such a death wouldn’t even be without precedence, since, in adhering to the literary lore, 2014’s The Hobbit: The Battle of the Five Armies famously culminated with the deaths of the party’s two youngest, most energetic dwarves, Kili and Fili, as Jackson later showcased in his prequel trilogy.

If, as Monaghan theorizes, Merry was set to be sacrificed in the name of plot pathos, then it likely would have occurred during Return of the King’s Battle of the Pelennor Fields, during which Merry—after being forbade by King Théoden—secretly joined a disguised Éowyn to participate in the Kingdom of Rohan’s horseback counter-attack against the siege forces of Mordor orcs—and later the oliphaunt-riding humans of the Haradrim—outside of Gondor. Merry’s role in the battle was the clear culmination of an arc that saw him go from a crop-thieving ne’er-do-well to sword-wielding battlefield hero, and highlighted him at his highest point. He also proved integral to the victory when he stabbed the Witch King of Angmar in the back—injuring himself in the process—which allowed Éowyn to make the iconic “I am no man” deathblow to the head, taking the enemy’s most powerful player off the board. Yet, Merry was left in bad shape by the end of the battle, found barely cognizant by a wandering Pippin in the aftermath, facilitating one of the film’s many emotional reunions. This moment could have been repurposed into Merry’s death scene, after which a perturbed Pippin would be motivated for vengeance in the ensuing, trilogy-climactic Battle at the Black Gate, thereby completing his own arc.

While Jackson had to make several changes from the source material—mostly regarding the timeframe and segments that detracted from the main plot—to make The Lord of the Rings’s chronicle-styled prose work on the big screen, he also knew that the understated narrative in the periphery from Tolkien’s extensive lore was an intangible quality that separated this mythos from other fantasy offerings. Indeed, the appendices included at the end of the novel trilogy were a consistent source of context-setting backstories that Jackson wove into the main narrative of the movies. Case in point, in the novels, the movie-prominent romance of Aragorn and Arwen was primarily told in the appendices, outside the main content. Likewise, Tolkien crafted full fates for our foursome of hobbits, including Merry, who ended up marrying Estella Bolger and becoming a key member of the Shire’s leadership as the Master of Buckland. The backstory is so extensive that it also reveals when Merry and Pippin died, after which they were entombed with honor over in Gondor, later joined by King Aragorn Elessar himself. Consequently, it would have seemed disrespectful to dismiss such extensive stories by Tolkien.

Regardless, fans of The Lord of the Rings will soon have no shortage of new onscreen content, with Amazon’s untitled prequel series—set thousands of years before the main story—currently in production and possibly set to premiere either by the end of 2021 or sometime into 2022. Moreover, an anime feature focused on the namesake of famous fortress Helm’s Deep, titled The Lord of the Rings: The War of the Rohirrim, is also in development from Warner Bros. and New Line. Given the eras in which these offerings take place, fans can likely breathe a sigh of relief for poor Merry.

Doctor Who: Jodie Whittaker Names Her Favourite Guest Star
Why We Can’t Quit I Know What You Did Last Summer
Superman is Bigger than The American Way: A Better Tomorrow for the Man of Steel Awaits
Castle Rock Season 1 Episodes 3 & 4 Review & After Show
15 Best NES Horror Games