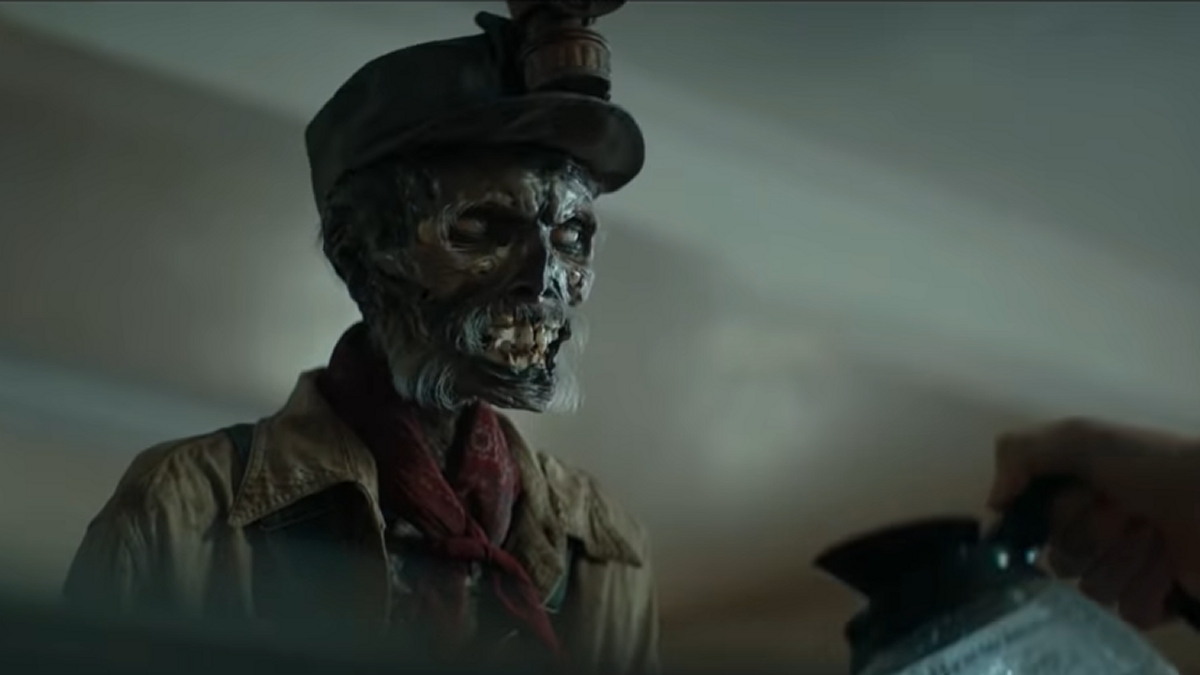 As Hollywood tries to shake off a little box office rust, we’re reminded that, oh yeah, we’re getting another Ghostbusters movie. Ghostbusters: Afterlife is set to hit theater on November 11 and a second trailer has just been released for it.

Much like the first trailer, we get a basic idea of our main characters and setting, but the threat is a little better explained. We still don’t fully understand what these kids are up against, but like a puzzle-based entrance to a scientist’s basement, the pieces are starting to come together.

Before we get started, here’s the trailer itself…

Okay. Now let’s get into what we see.

Callie (Carrie Coon) is the daughter of Egon Spengler and a single mother of two. Having lost their home and just being broke, they move to Summerville, Oklahoma, where Egon had owned a decrepit, old house. At this point, Egon is dead, though for how long isn’t yet explained.

Finn Wolfhard is Trevor, Callie’s oldest kid. Shown as something of a mechanic, he unearths the Ecto-1 and is able to get it running again. Though it’s more out of necessity, as it’s the only car in the shed with a working engine.

His sister is Phoebe, as played by Grace McKenna. She’s more of a nerdy outsider, keeping to herself. She’s able to discover the hiding spot of Egon’s equipment, shown to at least be a ghost trap and the PKE meter.

While Phoebe doesn’t appear to get any respect from her summer school classmates, she does get along with her teacher, Mr. Grooberson (Paul Rudd). Grooberson appears to not only be a mentor character to Egon’s grandchildren, but considering the opening of the trailer shows him having dinner with Callie, he could be taking the “father figure” role a bit too literally.

Less is known about Lucky (Celeste O’Connor), who appears to be framed as a love interest for Trevor, and Podcast (Logan Kim), who is shown ccompanying Phoebe and Grooberson in their Ghostbusters research.

Annie Potts makes a quick appearance as Janine, the original team’s former secretary. She tells Callie, “Your father wasn’t much of a homemaker. He could hardly keep the power on.” Then when asked if Egon left them nothing, she mentions, “I wouldn’t say ‘nothing.’”

Janine has always been into Egon in various forms of Ghostbusters lore, but we at least know that the two of them were pretty close in his final years. The situation behind Callie inheriting the dusty house makes it unlikely that Janine is her mother, since she comes off as more of a messenger than anything else. If anything, this makes it look like Callie and Egon had an estranged relationship and the only reason Callie is reconnecting with that side of her family is pure desperation.

The Return of Gozer the Gozerian

The previous trailer namedropped Ivo Shandor, an occultist brought up in the first movie who is never shown, but is established to have set up the ghostly events. Now we’re getting more direct references to the events of the first Ghostbusters movie.

The obvious stuff comes from Mr. Grooberson’s trip to Walmart. He sees a handful of Stay Puft Marshmallows come to life and gleefully cause havoc to themselves and their surroundings without showing any hints of pain.

Sometime after, Grooberson runs out of the store, being chased by one of Gozer’s demon dogs.

The same demon dog is also shown in a more spectral form, which I can only presume is how it possesses its targets. Man, I hope these are two separate incidents because otherwise Grooberson would have been running from that thing for hours.

While investigating what appears to be the Shandor Mining Company, the clouds start ominously gathering in the sky.

Purple lights shoot all over the town, using the same effects from the original movie.

The biggest eye-opener is Phoebe looking down a large, mystic well and saying, “Something’s coming.” While we don’t get a very good look at it, we do see what appears to be Gozer’s female form crawling out, signified by her iconic flattop and electric energy.

No wonder Egon moved to Summerville. He knew what Shandor was setting up, but was never able to put a stop to it. Whether it was age that did him in or Gozer’s forces, we’ll have to wait to find out.

The kids are shown chasing a blue ghost known as Muncher. We already knew that Slimer was part of a class of ghosts (Class 5 Free Roaming Vapor). After all, isn’t it a little weird that the ghosts in the established movie universe look so different from each other?

Rather than just use Slimer all over again, the movie is just relying on using the same species.

The Irrelevancy of the Ghostbusters

Ghostbusters 2 already showed the awkward aftermath of the Ghostbusters saving the world from a giant marshmallow god. Even though there were many eye-witnesses, they were gradually considered frauds. Even after the Statue of Liberty came to life and walked through New York City, you can bet that there are plenty of truthers out there downplaying this major moment in history.

The YouTube videos watched by our heroes shows that better than anything. Keep in mind, the events of the other two movies proved the existence of GODS. Now here we are, decades later, and a vintage commercial starring our saviors only gets views in the thousands while only a few hundred care to say whether they liked the video or not. The side-bar connects the whole thing to conspiracy theories.

Man, Men in Black was bullshit. They could reveal all the aliens on Earth and people would still just label in a hoax and move on.

The Return of Ray Stantz

The big stinger here shows Phoebe, Grooberson, and Podcast watching the phone number part of the old Ghostbusters commercial. The insinuation is that this inspires them to call the number. While that might just be clever trailer editing, we do see what appears to be one of them trying to contact Ray Stantz.

While we don’t see Ray’s face, we do see that much like in Ghostbusters 2, he runs an occult bookstore. He has a bible verse tattooed on his inner forearm, which is a reference to a scene in the first movie where he and Winston discuss the biblical implications of these ghosts and what they’re leading to. Ray brings up a bible quote, claiming it to be Revelations 7:12, though it’s actually Revelations 6:12.

“And I looked, and he opened the sixth seal, and behold, there was a great earthquake. And the sun became as black as sack cloth, and the moon became as blood.”

Summerville’s been having a lot of unnatural earthquakes, Ray. Better get on that. And bring some friends while you’re at it.

Night Teeth: Megan Fox and Sydney Sweeney Should Lead Their Own Vampire Movie
Amid Spider-Man: No Way Home Rumors, Charlie Cox Teases a Rebooted Daredevil
The Batman Feels Like It Picks Up Where The Dark Knight Left Off
Why The Sopranos Prequel Series Is a Bad Idea
Night Teeth: Sexy Vampires Feast on Crime Movie Thrills