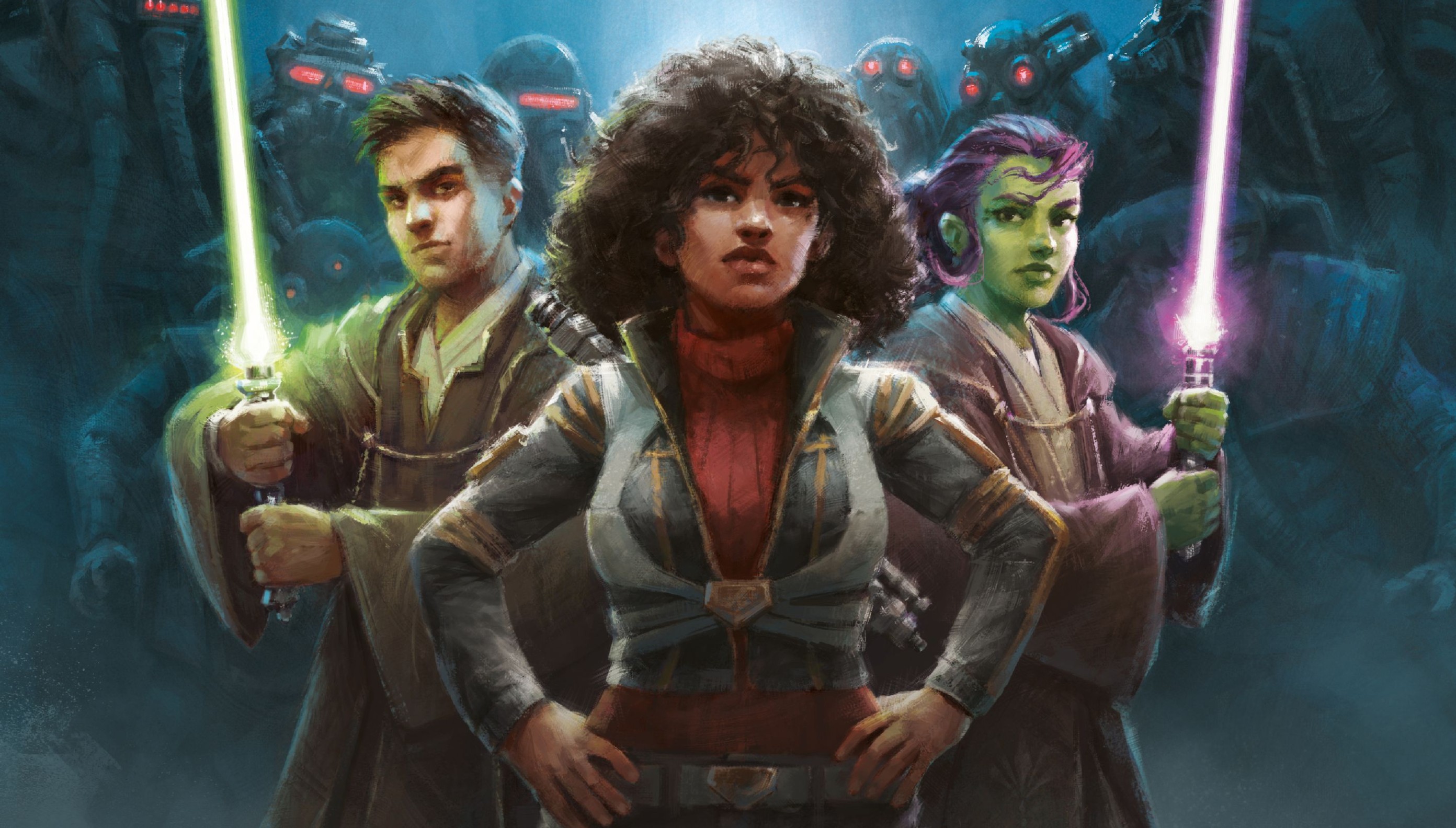 The young adult books in the The High Republic series continue to shine. Justina Ireland deepens a character who appeared in her middle grade installment, precocious Jedi Vernestra Rwoh, and adds a new hero with a strong, compelling connection to the underpinnings of the era in Wave 2’s Out of the Shadows.

Set about 200 years before The Phantom Menace, the High Republic is the Golden Age of the Jedi…but there are still some pesky threats. The pirate Nihil can create their own gravity wells and manipulate hyperspace, threatening any galactic travelers. Onto this scene comes Sylvestri Yarrow, a cargo hauler who discovers what she thought she knew about her mother was just a fraction of the truth. A classic Star Wars family clash, a deep dive into the workings of hyperspace, and the developing relationships between Jedi make this an entertaining book, even if the first half goes a lot slower than the second.

This book posits some absolutely fascinating ideas about what hyperspace is. It sounds hyperbolic to say this book is the one that really changed the way I look at Star Wars the most. But one conversation in particular, as well as some quirks in Vern’s abilities, suggest hyperspace and the Force might be connected. There’s even a possible connection to the Thrawn: Ascendancy series in here, suggested but just mysterious enough to remain fascinating after closing the book. Out of the Shadows lives up to the potential of the hyperspace incident that kicked off the whole series, and then goes beyond it to question some of the unexplored fantastical science of the saga.

Vern’s first appearance in A Test of Courage was also entertaining, but left me wondering whether the young Jedi’s untouchable self-reliance was meant to be taken at face value or not. Out of the Shadows has more time, space, and interest in making her a bit more complicated. She gets along well with her apprentice, Imri, but is also uncertain of her decisions as a teacher, or wonders whether their friendship makes their mentorship weird. A lot of this occurs off-screen, but Vern’s willingness to understand that Imri learns in his own way instantly endeared me to both of them more.

People react to Vern’s youth in different ways, and not all of them like how early she was promoted. The prose acknowledges she can be “dismissive.” She shows her youth, especially when trying to control Imri’s powers. (It takes someone else entirely to mellow out his debilitating sense of empathy, and it’s nice to see Jedi having a functional support system.) Nevertheless, Vern is a strong hero who I ended up much more attached to by the end of Out of the Shadows.

Syl’s role is a bit ambiguous at first as she’s roped into a business magnate’s plan, but in the end she became one of my favorite characters. First, she gives a glimpse into the world of hyperspace prospectors, with their own codes and superstitions. Second, her turbulent romance side plot is more a matter of a misunderstanding during a sweet summer romance than any bad actions: it’s easy to root for her and her girlfriend Jordanna.

Jordanna adds to the world-building too, and asks a question that sums up the series: “I want to know what it means to be good” in a world where you can try to save people and fail. Some of the non-Jedi characters lead meaty conversations about the moral shape of a world where the Force is real.

The villains’ side takes even longer to get going, but once it does the Nihil finally start to feel like an established sect. The jockeying between two villains is really fun, playing in the same sphere as many other Star Wars frenemy pairs (from Darth Vader and Grand Moff Tarkin to Kylo Ren and General Hux or the bickering Yuuzhan Vong in The New Jedi Order). The fact that the rivals are an amoral scientist and a vengeful teenage girl in this one just makes it better.

Ireland’s dialogue and prose are a bit more stilted in Out of the Shadows than in her middle grade books. I always enjoy her humor and energetic characters, but that just isn’t what this book is about. The change is appropriate for the older age group, though. It also shows the aesthetic difference between ordinary people and Jedi. Especially when Vern and Syl are talking, the relative formality of the Jedi’s dialogue looks intentional.

There are fun snippets of world-building here, and a Jedi Temple that feels as complete and bustling as it ever has in this era. There are even Jedi therapists! Jedi talk about how they’re getting more and more involved with the Senate, and how the Force pushes and pulls decisions around that. And Sequel trilogy fans will find out more about the San Tekka family’s business operations, too.

The book still has some of the weaknesses of the series: a lot of exposition, a few too many characters. The villain POV in particular features too much heavy exposition and teasing for other parts of the series. The book really picked up for me at the halfway mark, after it became clear what Syl had to do with the larger plot. Perhaps this tendency for all the books in the series to get most interesting at the very end is an attempt to replicate the structure of a movie. Reath’s role in the beginning is also unclear, leaving him mostly a weak link. Syl’s story seems to start at least five thousand words early, a common problem for The High Republic. Another common problem is that while the younger Jedi are ostensibly cool, they don’t actually save the day much.

But by the time the book gets going, it really goes. The dynamics between the women at the center result in a mostly-satisfying showdown. This book was both fun and explored great hyperspace pseudoscience and nuanced conversations that get the time they need. Ireland deftly balanced characters and lore, adventure and heart…especially in the back half.

Star Wars: The High Republic: Out of the Shadows is out now.