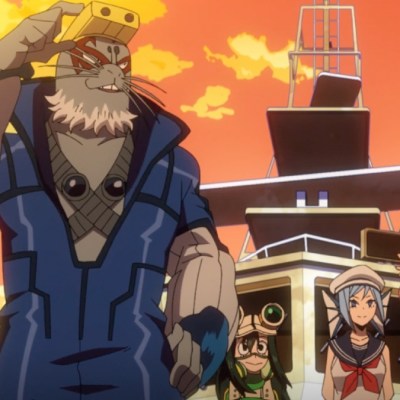 “I’m never at that dinner table. I know the reason why so well that it hurts.”

Family has always been a major component of My Hero Academia and a driving force for many characters, albeit in many different capacities. Everything that Midoriya, Uraraka, or Iida do all boil down to their family in one way or another, but Shoto Todoroki is a prominent exception where his family and the dysfunctional dynamic that’s festered over the years is a crucial part of his character.

The Todoroki family has improved in several regards, but Endeavor’s relationship is far from healthy. There’s a lot of potential behind any episode of My Hero Academia that largely just spends time with a character’s family in a bottle episode-like structure, but it’s by far the most appealing with the Todoroki clan. The anime is able to confront many of these background issues head-on and as the episode’s title teases, “The Hellish Todoroki Family” is far from a glimpse into a picture perfect family.

Back in the days when three-episode DVD packages would be released, “The Hellish Todoroki Family” would be bundled with “Shoto Todoroki: Origin” and “His Start,” as this episode very much feels like a complimentary response to those other installments. There’s endless promise in a My Hero Academia episode that allows the Todoroki family to ricochet off each other and allow years of pent-up hostility to come to the surface. This plot hits even harder when innocent Midoriya and belligerent Bakugo are added to the equation, almost like two contrasting audience surrogates. “The Hellish Todoroki Family” doesn’t disappoint in this area and that’s a lot of predictable behavior.

Bakugo’s hair-trigger temper over every little detail and piece of intimacy that’s offered towards him is satisfying, but so is Midoriya’s overly analytical breakdown of the simple dinner that’s presented in front of him. Fuyumi, Shoto’s older sister, is also extremely precious and needs to be kept safe at all costs. This episode doesn’t hide that it’s a showcase for Shoto and the rest of his family, but Midoriya and Bakugo are still in fine form. It’s a constructive development that builds off of the duo’s time in Endeavor’s Hero Agency and how they’re being shown both sides of this conflicted hero’s life.

Midoriya and Bakugo fall into a groove where they’ve grown accustomed to “chasing after Endeavor” and viewing each of his continual accomplishments as benchmarks for themselves. This acceptance into Endeavor’s home and with his family opens their eyes to how not every aspect of this hero is necessarily healthy to strive towards. It’s actually kind of poetic when Midoriya tells Shoto that he doesn’t need to feel compelled to forgive his father just because he’s his father. He reiterates that Shoto is such a generous individual that his difficulty to forgive Endeavor shouldn’t be viewed as a deficiency that he needs to rise above, but should actually be proof of his critical feelings.

“The Hellish Todoroki Family” utilizes an effective structure that juxtaposes Endeavor’s Pro Hero life with his personal life when he’s off the clock. Memories of the two begin to blur the lines between them. There’s a sad irony in that Endeavor has recently come across a major villain conspiracy with the Meta Liberation War manifesto, yet it seems like he’d more readily take on these brainwashed lunatics than go on a vacation with his family. Endeavor is plagued by nightmares, not of All For One, Shigaraki, or Destro, but rather dinner with his family. This vulnerability on Endeavor’s part has always been present with his character, but “The Hellish Todoroki Family” really unpacks it in a way where the details seem like they’ll be significant for the rest of the season.

The most obvious example of this is the missing Todoroki sibling that’s been teased in incredibly small doses over the course of the anime, but this episode helps expand in this area where it feels like a showdown between this neglected outcast Todoroki child and either Shoto, or Endeavor, is inevitable. A lot of attention has been placed on the unique fire and ice Quirks that exist in the Todoroki family and so to go by this rubric it’d definitely be a fascinating reveal–and one that makes sense–if Dabi were actually a disgruntled Toya Todoroki.

“The Hellish Todoroki Family” amounts to a great character study that’s a welcome change of pace that still features plenty of action. If there’s any problem with the episode it’s that it could reduce some of the Todoroki family-based flashbacks in favor of more time at the concluding dinner, which could stand to be longer. Otherwise, “The Hellish Todoroki Family” excels and mixes together many of the things that My Hero Academia does best.

During one of the many moments of training within this episode, Endeavor tells his trio of star students, “Don’t let the fatigue carry over into the next day.” He wants them to not give up or be too hard on themselves so that they start the next day at a disadvantage. It’s perhaps unintentionally eloquent on Endeavor’s part and while it seems like it will become words that his pupils will live by, he has to also apply them to himself otherwise he’ll never get anywhere. The heroes in My Hero Academia have become accustomed to a lot of success and with darkness on the horizon it’s never been a better time to understand that tomorrow is another day.