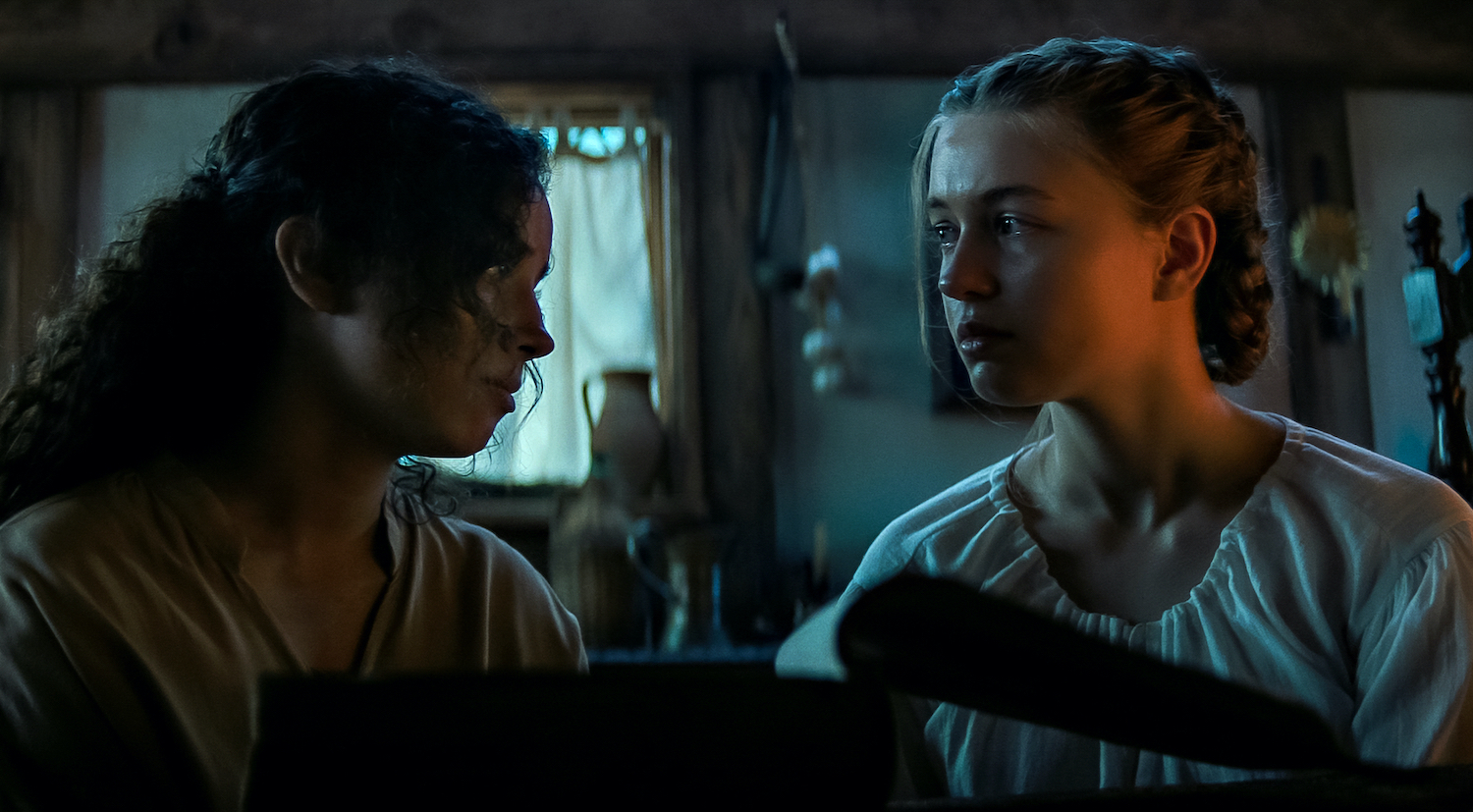 It never could be as simple as reuniting an ancient skeleton’s hand with its wrist, right? That became obvious last week when the Fear Street trilogy’s ostensible heroine Deena Johnson (Kiana Madeira) attempted to break the curse of Sarah Fier by attaching all missing appendages in the alleged witch’s grave… only to be warped to Shadyside’s early days in 1666.

Now in Fear Street Part Three: 1666, we’ve learned the full unholy breadth of Shadyside’s curse, as well as their sister township Sunnyvale’s good fortune—and it’s dark. Involving a perversion of all that is good(e), the curse that has taken so many beloved characters over the centuries turned out to be more twisted than perhaps anyone expected… but not for Sarah Fier, a victim of superstition and misogynistic zealotry. And in the end, Sarah got the last blood-curdling laugh. Here’s how.

For all those who became suspicious last week of the recurring Goode family, your paranoia has been vindicated: that cop really is the Devil. Or at least he’s in service of the Dark One.

By traveling to 1666, Deena was able to walk around in Sarah Fier’s shoes and get a taste firsthand of what it’s like to be wrongfully accused of witchcraft by a Puritanical community (even if she inaccurately later describes them to be Pilgrims). As it turns out, Sarah was not a witch; she was merely the young woman who’s secret love for Hannah Miller (Olivia Scott Welch) caused a spurned suitor named Solomon Goode (Ashley Zukerman) to take umbrage. And as it so happens, Solomon was the one actually dabbling in the dark arts….

Aye, it was Solomon Goode who spilled his blood on Satan’s stone, beginning the process of offering “one name” and soul for demonic corruption in turn for good fortune for the Family Goode. When Sarah rejects his offer to join his unholy bargain with Black Phillip—and more vexingly takes offense over his severing her hand—Goode accuses Sarah for the black magic that’s bewitched Shadyside: the curse which caused a murderous minister to blind children!

Sarah hangs, but not before offering a curse of her own: She will get back at Goode one day and reverse his damnable curse. In the meantime—and at a cost of more than 300 years of functional blood sacrifices—Goode and his family profit from their deal with Old Nick. From father to son, the mainline of the Goode family tree teaches the dark ways to each successive generation, who every decade or so offers a new name and a new soul. The person selected for damnation then goes on a killing spree, spilling blood that the Devil apparently feeds on. Beelzebub in turn grants the Goode family and their Sunnyvale town ongoing prosperity. Hence why by 1994, Nick Goode (also Zukerman) is a corrupt police sheriff and his brother Matthew Goode is the mayor of Sunnyvale.

Meanwhile, Shadyside persists in squalor until….

The most satisfying twist of Fear Street Part Three is that halfway through, it becomes Fear Street: 1994 Part 2! To be honest the accents in the 1666 portion of the film were a little dicey, as was the, uh, lack of Puritanism in a film set amongst Puritans. So best to go back to the era of flannel and overalls!

When Deena returns to the ‘90s, she realizes that Sheriff Goode has offered the soul of her girlfriend Sam Fraser (also Welch) to the Devil so she’d kill Deena and keep the secrets of Sarah Fier’s shallow grave buried. And since they have Sam locked up at Ziggy’s house, that means all the Goode family’s damned minions are soon going to be after them. But our heroes come up with a pretty nifty plan.

Thanks to how they saw Shadyside’s collection of nightmares pursue Sam in Fear Street Part 1, Deena and her brother Josh (Benjamin Flores Jr.) deduce that the ghouls will be strictly after Deena’s blood—which low-key makes me wonder how the monsters have such genetic precision to distinguish Deena’s DNA from that of her brother’s. In any event, they team up with adult Ziggy (Gillian Jacobs) and Martin (Darrell Britt-Gibson) by offering the movie-stealing line of the night:

Martin: Let me get my coat.

The plan for getting it done is also initially pretty solid. They sneak into the Shadyside mall after hours—which just so happens to be built on the site of the Camp Nightwing massacre, which in turn is above where the Goode family’s Satan’s stone is buried beneath the earth—and have Deena cut her hand, dripping blood into a bucket. Then by combining that blood with green paint, they’re able to create cursed blood trails throughout the mall, with each trail leading into a different department store. When four of Deena’s pursuant boogeymen show up, our Scooby gang locks the monsters into their department stores and waits for Sheriff Goode to arrive and inspect the remains of his handiwork. Instead of mangled bodies, he finds his teenage crush Ziggy, now ready to dump blood on his head like Carrie references never went out of style.

It’s an elaborate plan which was built on the idea of unleashing all the ghouls intended to kill Deena on their own master. However, it might’ve just been simpler to shoot him. Oh well.

This final flourish of course goes horribly wrong but at least we get the fun sequence where the hapless heroes figure out they can delay the monsters by spraying each in Deena’s green blood, allowing for proxy fights between pseudo-Jason Voorhees and pseudo-Ghostface.

All Goode Things Come to an End

The actual resolution to this centuries-long terror turns out to be pretty simple. Deena follows Goode beneath the mall and to the Satan’s stone, as well as the literal unholy beating heart of the Goode family’s power. While she fails at stabbing the much bigger evil copper, she at least succeeds at running a knife through his power’s beating heart. It’s apparently as easy as that to undo the curse. It also allows the vengeful spirit of Sarah Fier to return from the dead and finally stab a Goode boy in the eye, sending him to Hell and Shadyside’s curse with him.

The plot’s mechanics are simple, but the implications are much more interesting. Because who else follows Nick and Deena toward the mouth of Hell but Sam, still possessed and now conveniently free of her restraints. She also attempts to thwart Deena and nearly kills her, yet Deena is able to make simple eye contact with her one great love and break through, shattering Satan’s grip.

It’s intriguing since, technically, we’ve seen Goode’s curse divide lovers before, with Tommy Slater (McCabe Slye) in Fear Street Part Two: 1978 not even hesitating to swing his axe into girlfriend Cindy’s heart. But then Deena and Sam’s love is strongly hinted at as being of a greater emotional purity. After all, Sam is clearly a descendant of Hannah Miller, the young woman whom Sarah Fier loved and saved from the noose by insisting that she alone was the witch of Shadyside, even bewitching poor Hannah into impure thoughts.

Are Deena and Sam the reincarnations of Sarah and Hannah? It’s possible, if even on a spiritual level since Sarah doesn’t appear to have any direct descendants. In any case, unlike so many slasher movies released between the 1970s and ‘90s, a lesbian romance is prominently featured at the center of this story, and is even the one redemptive light in Shadyside’s darkness.

It also makes a striking juxtaposition next to Nick Goode’s dead body. This man might have been the current beneficiary of his ancestor’s bargain, but he represents something grimmer: the predatory nature of a society’s affluent feeding off the suffering and annual tragedies of their community’s underclasses. Sunnyvale flourished as a home for the wealthy while Shadyside wallowed in blood and trauma.

Kind of cuts deep the longer you think about it.

So… Who Took the Spell Book?

Of course this wouldn’t be an old school horror movie if it didn’t set up a sequel. Fear Street Part Three definitely offers resolution for its current narrative: Nick Goode is dead and exposed in the press as the Sunnyvale serial killer; Josh, meanwhile, may yet have his first girlfriend; and Deena and Sam are together, honoring Sarah Fier, if no one else will.

But beneath the reopened Shadyside Mall, we glimpse the book of black magic that Solomon Goode first used to make his pact, and a pair of hands belonging to an unseen face snatch it. Who stole the book and what are they up to?

Well, it’s worth noting that the Goode family has grown quite a bit in the 300-plus years since Solomon Goode accused Sarah Fier of witchery. Nick Goode appears to be the eldest son in the direct line. He’s the one taught the spells onscreen, and the boy who reads out Thomas Slater’s name—ironically in a bid to wrestle him away from Ziggy. However, just because Nick Goode is the one who damned Tommy and Ryan Torres in the last two Fear Street movies, it does not mean he was working alone.

Despite what Mayor Goode told the press about his brother, he almost certainly knew about his father and forefathers’ good work, as would the rest of the extended family. And here’s the thing…it will be so much harder next time for Deena (or, say, a new generation of millennial Shadysiders in the 2000s) to fight city hall. There’s also the likelihood that there’s more than one curse in that book of spells.