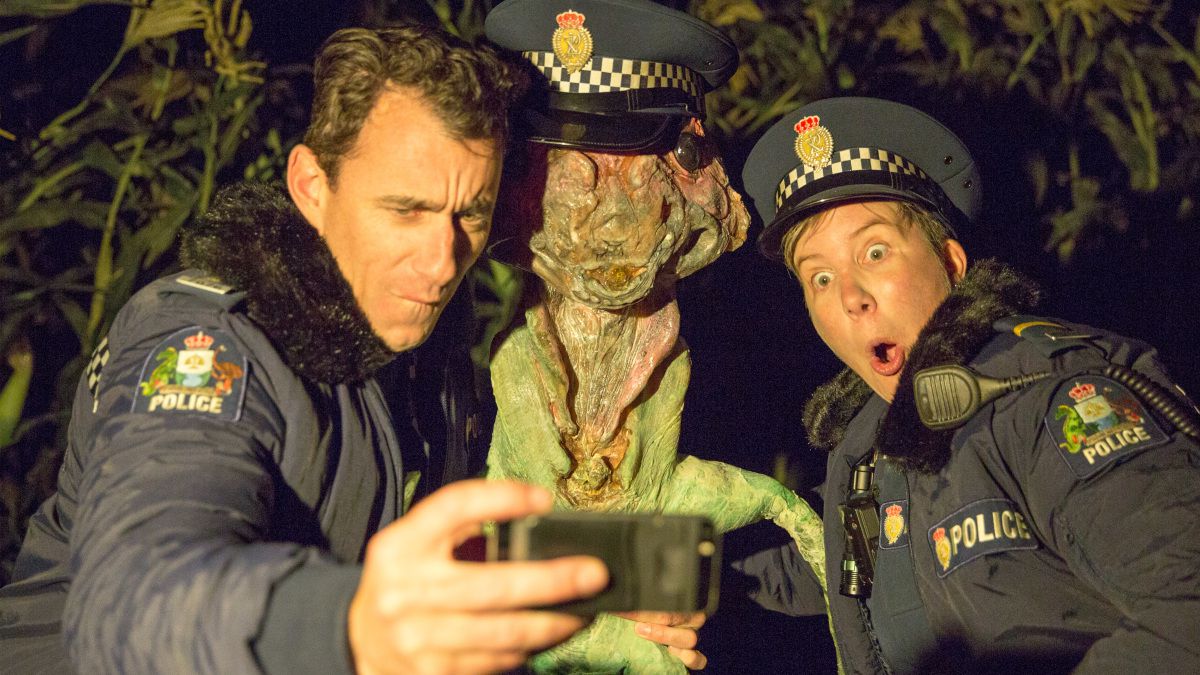 Wellington Paranormal does for cops what What We Do In the Shadows does for vampires: not really much. People didn’t offer their throats to Staten Island bloodsuckers, asking to be made immortal after the FX series, and there won’t be a run on the New Zealand police academy any time soon, even after any cadets learn there is a paranormal unit in some of the local precincts. Hardly any law officer has even visited the basement office of the paranormal unit at the Wellington station. It’s not because it’s such a tightly guarded secret. They just have no interest. The series brilliantly lampoons the entire force in farce.

The cops at the center of Wellington Paranormal are the most normal paranormal investigators ever assigned to cover “extraterresticle” activity. They treat supernatural law enforcement like it’s the most natural thing imaginable. At their most irate, they are merely nonplussed. It isn’t because they are hardened veterans, made cynical after years of spectral pursuit. It is because they are new at all this, not very good at it, and not that bright to begin with.

Wellington Paranormal is created by Taika Waititi and Jemaine Clement, the same people who dropped What We Do In the Shadows (first the movie, then the show) on us. It is a spinoff, officers Minogue (Mike Minogue) and O’Leary (Karen O’Leary), are from the film. Waititi and Clement are masters of capturing intellectual want. It isn’t like they go after the lowest common denominator, though. They mine mundane stupidity for gems which most artists overlook while trying to be clever. But this is a clever show, and an intellectual one which makes people smarter by watching it. We learn in spite of ourselves, and the cops trying to teach it.

We aren’t going to learn from the leads. Police officers often speak about going with their gut, which is like a super-powerful intuition. We can’t really trust Minogue and O’Leary on anything. When there’s nothing on the books to detain a suspect, who is telekinetically tossing non-lethal, but very annoying, objects at them, they try to make a case for breaking the law of gravity. They want to know if they identify a flying object, does it get reclassified as an IFO. Just because they are new at the job doesn’t mean they jump to rookie conclusions. When their commanding officer briefs them on reports of another cow in the tree, and notes it seems to be a pattern. They still ask if it’s paranormal. But is it normal?

The paranormal unit takes up space in a storage closet. It has not been cleared out, it is still over-crowded with files and brooms, but there is enough room for a desk and a whiteboard. It is run by Sergeant Maaka (Maaka Pohatu). He takes the assignment very seriously. He knows, for example, everything there is to know about the walking dead. He learned it by watching The Walking Dead. He is the only man on the squad who knows the one-digit PIN code to open the secret closet, and guards that number with his life, and all the Mission: Impossible technobabble he can mumble.

Maaka is also the only member of the police who doesn’t treat the new class of incarcerates in a matter-of-fact fashion. As opposed to FBI Assistant Director Skinner on The X-Files, who routinely shot down the most outlandish claims of his secret FBI unit, Maaka encourages and even suggests more outrageous possibilities. But you can count on him when the chips are down. Maaka has a degree in ass-kicking. He’ll even kick his own ass “and that’s not an easy thing to do,” he assures his underlings.

We get two cameos from the film What We Do in the Shadows. Cohen Holloway does his lycanthropic best to keep a tidy home, while Cori Gonzalez-Macuer’s vampire Nick has a new job. He’s working at the Blood Bank, and is finally getting the hang of all the glamor magic all the other vampires keep going on about.

Much of the humor comes in the run-of-the-mill style of policing the two leads employ, and how they attempt to translate these into understandable cop jargon. As a mother who is possessed by a demon evades arrest, officer Minogue calls in backup because he is “in pursuit of a highly acrobatic housewife.” Other times he pulls in from common pop culture, assuming at one point he’s in the Upside Down when he’s merely on the wrong floor.

O’Leary is so down to earth, she tells a werewolf to heel, repeatedly, and is more peeved at millennial demons for ignoring protocol because they’re checking their cell phones than biting interrogating officers. Both officers get very excited when they get to turn on the flashy lights, and positively possessive when it comes to tasers. No matter how much experience Minogue and O’Leary learn from on-the-job training, we can be assured they will not retain a thing. They’ll still issue a noise complaint summons to some poltergeists who’ve been partying since 1974.

The six-episode New Zealand parody merges The X-Files with Cops!. Written by Clement, together with Paul Yates, Melanie Bracewell and Jessica Hansell, and directed by Clement, Jackie van Beek and Tim van Dammen, it maintains the mockumentary format which has become their trademark. It is shot with handheld cameras, bodycams, and dashcams. Every police reality show cliché gets twisted into increasingly malformed situations. The officers talk to the camera, explaining procedures, and occasionally tell the camera operators them to run for their lives, because everyone is on their own when otherworldly plants start spewing acid.

Wellington has a lot of supernatural activity for a relatively small city. In the first episode, Minogue and O’Leary find a drunk demon in a pedestrian mall. They go on to chase aliens, ghosts, yokai, fellow-officers-turned-zombies, and paper bag demons. They look like regular plastic, shopping bags, blowing in the wind. But looks are often deceiving on Wellington Paranormal. The creatures are rendered on a very small budget, which gives the show license to highlight the silly over the frightening. Though a particular chase through a corn field is exceptionally suspenseful.

A creepy killer-clown car scene is classic TV sitcom comedy, and a major highlight in a series which is rife with funny visuals, sight gags, and abnormally effective physical comedy. Please watch the backgrounds, any security screens, and computer monitors. There is a lot more going on than just the jokes. Wellington Paranormal is dense and funny as a shallow grave.